This Sleeper Turbo Regal Can Rock The House 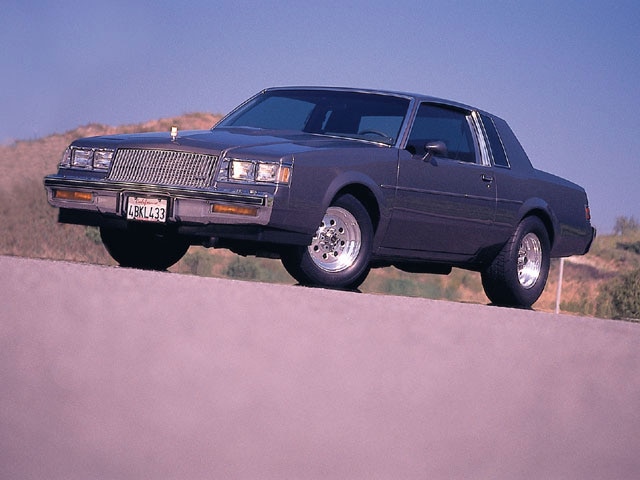 John Lehmann Jr. has always been fascinated by high-performance street cars. Over the past 40-plus years, he has owned several Corvettes with small-block V8 power and a couple of Novas with big-block V8s beating under their hoods.

In the mid '70s through the late '80s, Lehmann was at various times, a crewmember on three top fuel cars. These were local teams that participated in events contested in the western part of the country and were moderately successful. But as expenses began to rise, many of these efforts were squeezed out. We asked him about his experiences.

"When I left the top fuel scene, I was driving a 1969 Nova with a basically stock, 396-cubic-inch, 375-hp big-block. This car would run low 13s and dip into the high 12s on occasion. I was, however, growing tired of the high-compression, solid-lifter cam and low fuel mileage. Don't get me wrong, this was a fun car to drive, but not as a daily driver. The search for a high-performance replacement car commenced.

"I was very disappointed at what the auto industry had to offer this segment of the market. I began talking to some of my buddies about the dilemma; some of them felt the same way I did.

The conversations began to focus on the turbocharged Buicks because they were very comfortable, easy to drive, got decent gas mileage and were moderately fast stock. As I read more about these cars, I became very interested, especially when I found out they would run in the high 12s with just minor bolt-on modifications. I was hooked.

"I purchased my 1987 Turbo-T in December 1986; I was very pleased with its manners and performance for about four years.

"In 1993, I was having a shift kit installed at Art Carr's transmission shop in Fountain Valley, Calif. After the installation was complete, I asked if there was anyone in the local area that knew how to work on these cars as I was very unhappy with the Buick dealer where I purchased the car.

I was referred to Lou's Auto Service in Lake Forest, Calif. I made an appointment to visit and speak with Lou Czarnota about what changes could be made to improve the performance of my car. I was very impressed with his operation and in-depth knowledge of the turbocharged Buick engine.

"The first set of modifications included a 3.73 rear axle, TE44 turbocharger and a Spearco intercooler.

"The car responded very well to these upgrades and needless to say I was very pleased. I kept the car in this condition for a couple of years. In 1995, my work took me to Denver. Nothing much happened for the next 30 months, other than I developed a major oil leak in the rear main seal. I returned to California in 1998 and immediately called Lou and began discussions on replacing the basically stock engine with one of his .030 engines."

In December 1998, Lehmann stepped up to the plate. His .030 engine runs a refurbished stock crank, which swings a stock rod and TRW piston combination. When it comes to ring gaps, Czarnota likes to run .018 inches on the top ring and .016 inches on the bottom ring. This is a closer tolerance than the manufacturer's spec of .020 inches, but Czarnota cites superior sealing and no leakdown problems, even at higher boost levels, as major benefits.

When it comes to crankshafts, Czarnota doesn't recommend regrinding a stock crank past .010 inches. If a crank needs more machine work than this, a cherry, new stock cast crank should be used. The crank is secured by steel main caps on the center mains only because that's where most of the load is absorbed; the remaining caps are stock spec.

"The car was definitely in the high-performance category and I could compete and outrun most street vehicles," says Lehmann. "I was content with this setup for about a year and then I began talking to Lou about one of his 40-over engines with a girdle and aluminum heads."

In 2000, a .040 engine was installed. This engine runs 8.5:1 compression JE Pistons and shotpeened and magnafluxed stock rods with ARP bolts. A hard-to-find new Turbo 6 crankshaft was used and the engine was treated to Czarnota's famous timing cover treatment, which opens up the oil passages and improves the flow while upping the volume of oil moved through the engine. A Lovenridge block girdle ensures rigidity throughout the short block.

The induction system consists of a Limit Engineering TE62 turbo, an Accufab 70mm throttle body and an Eastern Performance front-mount air-to-air chiller. An Erson cam was installed to maximize efficiency.

The cam provides .488 inches of lift and 218 degrees duration at .050. Boost is kept to 16 psi and is controlled by the ECU. Czarnota burned a dyno-designed chip for the car, taking into consideration the engine's fortified fuel system where dual Quad Air pumps feed 55 lb/hr Siemens injectors. A Quad Air voltage booster and Magnecor plug wires work with the Buick's stock direct-fire ignition to light off the charge.

Once combustion occurs, a Terry Houston downpipe and prototype Houston headers direct the spent gasses out by way of a Hooker cat-back system.

The heads of this Buick are interesting. Lehmann chose Champion Racing Heads to top his Turbo 6. The Champion GN1 aluminum heads are a walk on the wild side. Made from a special casting with 356-T6 aluminum, Champion GN1 heads are direct bolt-on units requiring only longer 8.850-inch pushrods to be used with all-stock GN components.

They can be configured for aftermarket valvetrains, including stud-mounted rocker arm systems, but the big advantage of Champion GN1 heads are in and around the combustion chambers. The chambers have a volume of 46cc while the valve centerlines have been relocated to allow the use of larger 1.90 and 1.60 valves.

The GN1 design also unshrouds the valves for maximum airflow. In the runners, volume has been increased to 159cc on the intake side and 79cc on the exhaust side. Low-lift airflow and air speed have been attended to in order to ensure responsive performance. Bolting on an average of 30 percent more flow has never been so easy. Lehmann employed T&D rockers and pushrods in his GN1s and is happy with the package.

Power application is handled by a Culhane-prepped 200R4. Steve Culhane swapped the 200R4's stock seven-vane rotor for a 10-vane unit from the 700R4. Fresh clutches were installed with third and fourth gear each getting an extra clutch. The pressure plate was machined to accept the extra clutches, as clearances are critical in the 200R4. The servo and sun shell were also addressed and the valve body was tweaked for added shift firmness.

Mickey Thompson and BFGoodrich rubber is mounted on Weld Racing aluminum. One of the best tricks for turbo Regals is upgrading the braking system. For years, ads have read, "run 12s for $600." But what about stopping? Baer Racing has developed a number of systems for the G-Body. The systems can be broken down by budget or tire size.

The Street package can accommodate stock size wheels and is less expensive than the top-of-the-line Track system. The Track system on Lehmann's car sports 13.1x1.1-inch front rotors as well as twin-piston performance calipers. A rear conversion puts a set of Corvette-spec rear brakes on the Buick.

Lehmann puts his foot into the throttle on a fairly regular basis and says the car's thrust is noticeably superior to the big-block Chevys he's owned. Czarnota says the car is detuned for street usage. With the proper octane in the tank, boost can be cranked to 24 psi, which would put output between 650 and 700 hp. In this trim, the Regal should lay down 10-second e.t.s with ease. Either way, this sleeper rocks.