This Wide-Track Turbo GTS IS Built For Speed 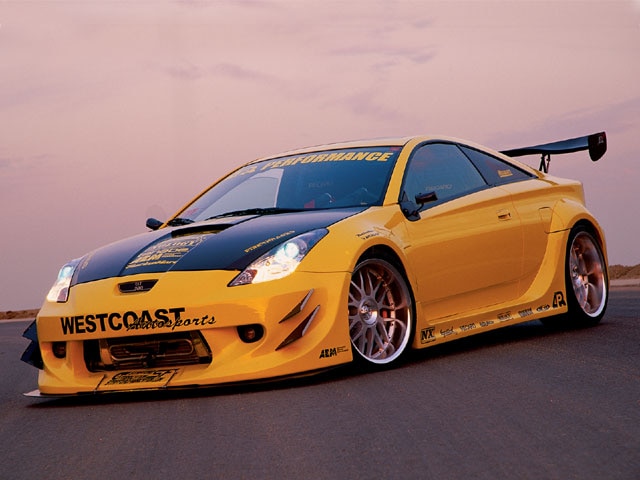 When a turbo'd wide-body vehicle comes along that's as clean as Richard Del Rosario's, Turbo can't take photos just anywhere. But finding a prime location to shoot a car in Los Angeles during rush hour is like trying to find a clean condom in an Amsterdam whorehouse.

Luckily for owners Richard Del Rosario and Chris McGehee, the latter of whom is the builder of this impeccable 2003 Toyota Celica you see before you, a colleague came through at the last minute with an unparalleled location. "High in the hills you must go, to a construction site where nary a building has yet to be built," he said.

He also warned us that as nice as the spot may be, it had a gate at the bottom that would be locked come dusk. Giving ourselves two hours or so to complete the shoot seemed reasonable as the sleek Celica rumbled through the open barrier.

The dirty Los Angeles light hovered over the city below. The soft, sultry rays brought out the clean lines of the Celica even more, while the completely clear background accentuated the car's muscular wide body, allowing it to ripple and flex freely, unfettered by any obtrusive objects in the background. Just as this paragraph gets caught up in the prose of the image, so were we on that clear evening.

Before we knew it, day turned to dusk and dusk turned to night. Instead of checking the gate, we decided to take a couple of night shots. By the time these delayed-exposures were finished and the B&G S3 springs back to a height accommodating enough for the L.A. freeways, that gate we had seen on the way up was closed. A big fat padlock and chain ensured it would stay that way. And there was no one in sight.

"Maybe there's still someone at the trailer," we said. A knock on the door of the office brought nothing, while a shake on the door set off the alarm. Unfortunately, the alarm didn't alert a guard with a key. It appeared Chris and I would be sleeping in the construction site. But, before building beds out of 2x4s and fiberglass insulation, we decided to look for a back way out. We came upon locked gate after locked gate, like prisoners in a darkened labyrinth with no escape.

Finally, we found an opening, but it was blocked by a 40-foot-long, 4-foot-high wall of sandbags. We started moving them. Making an opening for the chase car and the Celica took a good hour of manual labor; Chris missed supper and yours truly was late for happy hour. On the plus side, we got a hell of a workout and as usual, you dear reader, have unsurpassed impeccable images of one of the world's finest modified Toyota Celicas.

The most noticeable part of this 2003 model has to be the APR GT300 wide body. Very rarely is one of these installs seen executed with such precision. The front fenders match the front bumper almost seamlessly, as do the lionesque rear haunches. The entire musculature is covered by PPG Signal yellow paint with orange pearl. An APR front splitter complements the front fascia of the Celica when it appears in your mirror, while a rear diffuser from the same company cleans the air behind as it blows by. Both these items are carbon fiber.

Other items made from the coveted material include the canards, the bonnet and the rear-hatch handle. And the APR GTC-300 Celica spec rear spoiler is carbon as well.

Lighting up the road for those late-night treks through closed-off construction sites is a set of G-Garage HID headlights while TYC Elegante tails light up when the Toyota screeches to a halt upon finding an exit.

Between the burly arches and underneath that stylish Fiber Images carbon-fiber hood lies an engine that means business. The already potent four-banger GTS model has been boosted courtesy of Stafford Fabrications. The piping, fuel system and FMIC are all built around a Garrett T3/T4 turbo for this application. Owner Mike Stafford undertook the task of developing a bolt-on turbo kit for a 2003 Celica GTS. Owner Richard Del Rosario went to them to develop this kit because nobody else was willing to take on the task of turbocharging a late-model car with a computer-controlled throttle.

The first task was to choose the turbo. They picked one that would match the output desired, as well as having fast spool-up for a street car. This unit ended up being a T3/T4, with a custom blend between the compressor and exhaust. Understandably, Mike was tightlipped about the trims.

The next task was to figure out how to make it fit in the limited space, as well as bolt to the stock exhaust. Because it's a bolt-on kit, they tried to accomplish the task of making the turbo/header/downpipe combination a direct replacement for the stock manifold. Then, Stafford had to figure out how to run the piping to accommodate a 3-inch air intake system that didn't sit under the exhaust manifold, and still have space to route the discharge piping around to the front of the car. Next was fitting the 19x9x3 intercooler without cutting up the APR 300 widebody kit while also retaining the factory fog lights. To top the turbo kit off, Stafford fitted it with a custom fuel rail to accommodate their unique fuel system, and fitted the kit with a Blitz blow-off valve. Once the kit was test fitted, the piping was pulled and sent to Aries Blasting, where it was covered in a candy blue powdercoating to accent the yellow paint job.

For R&D purposes, the Celica was taken to Le-Toy Motorsports in Bakersfield, Calif., to dyno tune the combination. On a mild boost setting, the Celica put down 225 hp to the ground and 190 lb-ft of torque. We were ready to step it up, but with the 19-inch wheels, the clutch wouldn't let testing go any further.

At the moment, Stafford and company are projecting the horsepower will be around 250 to the ground, and 215 lb-ft of torque at 8.5 psi once the clutch is replaced. Nitrous Express steps into the picture for this powerplant, but not directly. The juice is actually released through a small valve onto the intercooler to enhance the heat dissipation of the unit. The final power mod was a Tanabe Racing Medalion exhaust.

To better funnel the power to the ground, an ACT clutch replaced the failing stocker, a Fidanza aluminum flywheel was added and a Monkey Wrench Racing LSD were added to the mix.

While part of the Celica's aggressive stance is due to the widebody, suspension slam also affects the overall image. The B&G S3 suspension system's full adjustability allows the Celica to creep around lower than a life-insurance salesman at a rest home. Hotchkis camber links allow for some toe-in and toe-out, while an APR strut brace, along with the aforementioned springs and struts, provides plenty of bite to match the widebody's bark. Stoppers are slotted 13-inch rotors from AEM both front and rear and they bring the Celica to a halt quicker than the King of Pop in front of a junior high.

The Celica's interior isn't worn. From the Recaro Speed recliner racing seats to the custom-built center console, this Celica had barely been sat in before the photo shoot. The rest of the cabin has been spruced up with other color-matched interior pieces, including the door cards and dash. When firing up the Celica's turbo'd 2.0-liter, Richard deftly places his finger on the Ignited push-button starter after flicking the arming switch. Before blasting up on-ramps and such, Richard's hand works the TRD shift knob as his eyes glance furtively at gauges from Auto Meter. With all systems go, he takes off like a fighter pilot, screaming, "I feel the need for speed!"

This sick Celica can answer that rallying cry in spades. With boost coursing through its veins and a truly sinister stance, this Toyota delivers on its promises.