Going Old-School On The Street And At The Strip 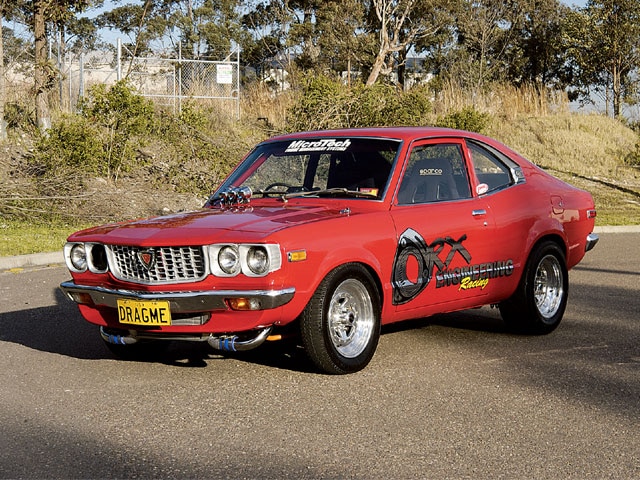 To think this humble little RX-3-dressed Mazda 808 was once powered by a featherweight piston engine pushing about as much power as a Yugo with a misfire! Check it out now.

For some, an accident is heartbreaking; this often is the reason a few outstanding performers get put aside, only to be found years later with weeds growing past the roof-line. But this wasn't to be the case for Jon Blanch from RX Engineering in Newcastle, Australia. Having already run a personal best time of 10.10 at 138 mph with 480 rwhp, Jon's Mazda 808-turned-RX-3 met its match when he returned to the traction compound with more boost and 550 hp at the tires.

Jon is a fairly even-tempered guy; not much fazes him. He just tells it like it happens; nothing more, nothing less.

"I gave more boost off the line the next time I went out, and to my surprise, it came up really hard. So much so that the back bumper hit and the rear tires left the ground!" he remembers.

His 60-foot time was an impressive 1.36 (set by the rear wheels), but when the front wheels returned to the ground, the car suffered what automotive scientists might call "hitus deckus maximus." Here's the list: the suspension bottomed out, the front rims were flat-spotted, the waste-gate was smashed clean off, the right-hand chassis rail and strut tower were bent up 2 inches and worst of all, there was a particularly noticeable crack in the A-pillar. Ouch.

It was enough to put Jon's racing schedule on the back burner for a while. Yet Jon wasn't sure what a "while" meant and 18 months later, he had the car back in action, far better than it ever was.

After the big incident, Jon set on the task of making what was broken, unbroken again. With Newcastle Smash Repairs wielding the hammers and dollies, the car was gradually returned to its former glory.

The front and rear guards were trimmed to stop metal and rubber conflicts under racing conditions and a little bit of outer shell massaging was done under the rear guards for added width. Inside Jon had an eight-point, steel roll cage fitted to suit ANDRA (Australian National Drag Racing Association) regulations and fabricated a new dashboard assembly from aluminium. From there, Jon took the car to Kai Ferguson, who coated it in its current shade of "red hot sting" duco.

Engine-wise, the JC Cosmo 13B remains much the same as its previous state and from standard has been race-ported, has extra dowels, an external oiling system which feeds a clearanced crank/bearings and most importantly, factory Mazda 2mm apex seals slotted into clearanced Cosmo rotors.

Boost is supplied by a child-eating Garrett TA45 turbo running a .72 compressor housing mated with a 76mm impeller wheel and a .96 turbine housing on the back. With 480 hp at the tires, Jon was running an average of 20 psi boost, yet he's had it up around 25 psi recently and says "it'll still take a fair bit more." The boost travels via 2.5-inch plumbing, is chilled by a custom PWR tube and fin intercooler and is kept steady by a PSR 45mm wastegate controlled by a Turbosmart E-Boost.

Exhaust gases leave the turbo via a 4-inch downpipe and travel right to the back through a custom-built mandrel-bent system. Jon does run a nitrous oxide system, but says that its main purpose is to get the stall converter up rather than to develop power.

Controlled by a MicroTech LTX12S ECU that was wired by Darren Whalen and tuned by Jon, the four Bosch coils fire through Magnacor leads and a set of NGK Racing plugs.

Fuel is fed by a pair of Bosch 044 main pumps, rated together at 1400 hp, via a pair of 3/8 lines to a Paxton regulator, which keeps fuel pressure to six 1000cc (96 lb/hp) Rochester injectors-nice and even. Although the intake manifold appears standard, it's been power ported (extrude honed) and has dramatically improved flow characteristics.

Coming from a V8 background, Jon had already been through his fair share of automatic transmission R&D and didn't want to deal with many painstaking manual gearbox and clutch upgrades. With this in mind, he sought the experience of Al's Race Glides in Sydney to build a Ford C4 automatic.

Fitted with a rotary adaptor plate, the C4 was given full rollerized internals, a reverse-pattern full-manual valve body, a trans-brake, Dominator 4500-rpm stall converter and an extra deep oil pan that holds the well-cooled oil and PWR trans-cooler.

Power from the C4 is transferred down a custom one-piece tail-shaft to a shortened Ford 9-inch diff fitted with a 4.56:1 full-spool and 31-spline billet axels. On the front, the 808 sits and squats courtesy of factory springs coiled around 90/10 struts. Up the back, the car retains factory leaf springs fitted with two extra leaves and is kept in check by a pair of additional two-link bars and Koni shocks.

On the occasion that Jon drives it on the street, Advan and Michelin street tires take over traction duties. He also removes the now-fitted wheelie bars when he hits the street; they tend to scrape entering the driveway at his house.

The interior was kept fairly simple as drag racing was the intended career for the Mazda. The factory seats were removed in favor of Sparco race buckets. RPM 3-inch five-point harnesses and any other parts that could be improved without adding a lot of weight were handed to Andrew McFadden from Salamander Bay. The custom dashboard now hosts Auto Meter gauges and a MicroTech dash unit to keep Jon and the engine on good terms with each other.

With all the repairs done, Jon and the RX Engineering crew made their debut at the brand-new Western Sydney International Dragway at the Jamboree (jamboree.com.au), an event heading into its 14th year in Queensland, but brand-new to Sydney. From start to finish, the car repeatedly improved its times, finishing with a ball-tearing 9.32 at 144.98 mph.

Jon confidently says the car still has plenty left in it and the modified leaf-spring rear-end is more than capable of securing a good relationship between increased horsepower and the current available traction. So, if current standard keeps going, John is hoping he'll be able to see an 8-second pass some time this year.

As part owner of MicroTech global, Jon spent some time in the United States and Puerto Rico in 2003, helping to promote and instruct the tuning of MicroTech Engine management systems (as found in world-class cars such as Jose Torres' 6-second RX-7 and Domenic Rigoli's world-record holding 8-second WRX).

If you're in the market for a bit of Aussie know-how, contact Jon and the MicroTech team via www.microtechefi.com.