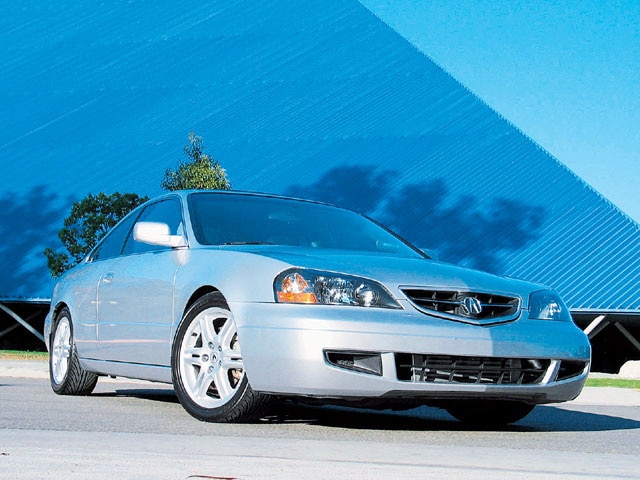 Ramanan Thiagarajah started toying with Hondas during his freshman year at UCLA. He had a B18C GS-R-powered Civic in 1995 and started competing in the Battle of the Imports and other left coast events of the day. He says he was the first to hit an official naturally aspirated 12-second e.t. at LACR and won that title twice at the Battle of the Imports. Ramanan graduated from UCLA and bought a 1998 Prelude that he subsequently turbocharged. After that he stepped up to the flagship-an NSX. Then came the Acura CL Type-S, but did this deaden his nerve to boost? No.

The CL Type-S is one of those undecided cars. Acura seemed like it couldn't figure out if the CL was a luxury car or a sports car. There were enough attributes of each side of the argument for justification of said argument. Concentrating on the sporty side of the ledger we see a seductive six-speed manual gearbox, healthy 3.2-liter aluminum V6 rated at 260 hp from the factory, the VTEC effect, a limited-slip differential and 17-inch rolling stock.

Ramanan bought his 2003 CL Type-S six-speed in August of 2002 and reports the car was pretty darn underpowered so he started putting together a turbo kit in December of 2002. "I pieced together all the required components but did not put too much thought into what I chose specifically," says Ramanan. "The turbo was a Turbonetics T3/T4 S-trim which I purchased off-the-shelf along with a TiAL 35mm wastegate and a Blitz blow-off valve. On the fuel-side, I only had a Comptech FPR (rising-rate) and a Walbro in-tank pump. My intercooler was a Spearco core, which was decent I suppose. I contacted Steve Brown who used to work for Elite Motorsports (they don't exist anymore) and contracted him to fabricate the manifold. It was a one-off and his first attempt was pretty good. At this point the car made 345 whp at around 6 psi. I did have a few problems... (1) No way of tuning for fuel and timing. (2) Hondata was not willing to do anything for me either. (3) E-manage was not proven. (4) AEM EMS was overkill. Anyways, I wanted to run the car and ran a 12.9 at 111.87 on DOT tires at Bakersfield. I sold that kit and decided to pursue an N/A path."

This motor has potential, so I got Extrude-honed and ported the intake manifold and got a custom 75mm throttlebody made. Along with UR pulleys, I also purchased the Comptech clutch/flywheel combination from Pit Crew Motorsports, where I got many of the components for the transformation. This package allowed me to run a 13.57 at 102.65 using slicks, naturally aspirated without any weight reduction. After working through some driveline issues I was still stuck with a CL-S probably making about 255whp (around 300 at the crank). I then ran into a friend, Steve Lewis, who is a design engineer at Garrett. Ironically he also owns a six-speed CL-S. Given the resources available at Garrett and my experience having already put together a turbo kit for this car, we set out on a no-holds barred project to make a pretty crazy CL."

Steve ran simulations to identify the optimal turbo compressor and turbine housing sizes. Simulations on several intercooler configurations were also conducted to determine optimal airflow and charge-cooling capability. "I had just finished reading Corky Bell's famous book on designing turbochargers, "Maximum Boost" and was now full of ideas," says Ramanan. "I contacted Steve Brown once again and we set off fabricating another manifold with a little more engineering thought... yet still practical.

By this time a fellow acura-cl.com member had successfully integrated a GReddy E-manage with the CL, so engine management now became very easy. To help curb cylinder temps and hot-spots that might cause pre-ignition, we swapped in Mugen thermostats and the Mugen fan switch which drop EGT by 10-12 degrees. This is a 10.5:1 compression motor, so given California's awful 91-octane gas, detonation is always imminent!"

Manifold design became more critical and more thought went into fabricating the merge-collector (from both cylinder head exhausts) and how to increase exhaust velocity feeding the turbo. During development, runner length was sufficient to eliminate any pulsing that might occur which would cause a flow impediment leading to high EGT, backpressure and detonation. Ramanan and Steve also decided to fit in the largest downpipe possible, which turned out to be a three-incher that tapers down to 2 3/4 inches going back toward the catalytic converter. This set-up was used on Ramanan's car while Steve's car received a 2 3/4-inch downpipe that reduced to a to 2.5-inch pipe because the big-pipe setup was a very tight fit.

"I tuned the car using a TechEdge wideband O2 unit and experience," says Ramanan. Initial tuning was performed on the street but when things got serious it was time to hit the dyno. Ramanan dialed in three degrees of retard applied at 5-6 psi to curb detonation due the poor 91-octane fuel and the engine's 10.5:1 compression. On the rollers, the new setup delivered the good -419.3 whp and 362.1 lb-ft of torque an improvement of 73.4-whp compared to the old kit at pretty much an identical boost level (6.2 psi).

Ramanan estimates replicating the setup would run between $6,000 and $7,000, installed, depending on the type of turbo you pick. Boosting an auto-shifted Cl would be trickier due to a lack of space for piping but still doable. On newer Accords and TLs the integration of the cat into the exhaust manifold would be a hurdle. But according to Ramanan, "boost will find a way."

Looking in the ol' crystal ball Ramanan foresees the addition of a 750cc secondary injector, which will allow the system to support around 8.0 psi. The power goal is 460-470 whp on 100-octane fuel.

Ramanan quietly confessed that the CL more than feels fast, "It's crazy fast and capable of putting a few car lengths on a 996 TT, Ferrari Modena 360 etc. At 470 whp who knows!?! I had to purchase a set of Yokohama ES100s which are way better than the stock Michelins but even the Yokos still granulate under full throttle." This is one sleeper that will be the nightmare of many an exotic.

Editor's Note
We would like to showcase more "Reader Boost-Up" articles in future issues. If you have a worthy turbo project, e-mail the specifics and some Jpegs to evan.griffey@primedia.com with the subject line "Reader Boost-Up."