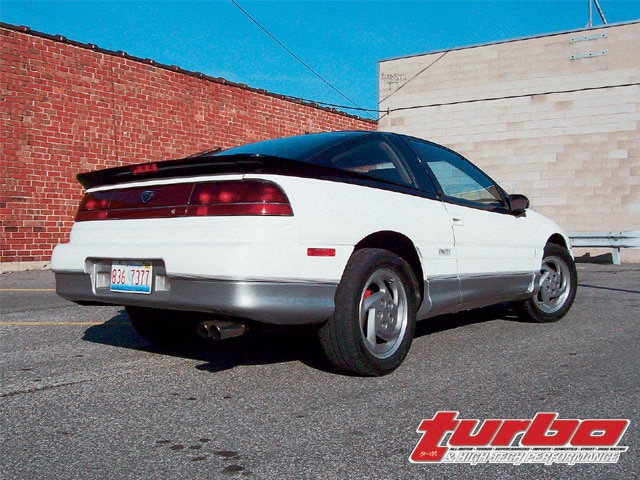 Built by an Army of One
Tom Wegner makes a return visit to the pages of Turbo. Back in the March 2005 issue he had a letter published with a photo of him in Iraq. Now that he is back home from serving in Iraq as a UH-60 Blackhawk helicopter gunner/mechanic for the United States Army he removed all the stuff his wife had piled on top of his project car and got to work. The car in question is a 1990 Eagle Talon AWD. Particularly impressive about this buildup is that Tom performed all the work himself, from the paint and bodywork to the engine tuning and all the custom fabrication.

The 2.0L engine has been bored 0.020 over and filled with 8.3:1 Wiseco slugs with Teflon-coated skirts hanging off first-generation rods with floating wrist pins. The head was rebuilt with the combustion chambers debured and a full port job. A Turbonetics 60-1 compresses the charge air before it passes through an intercooler fabricated from a cut-down Freightliner intercooler and plumbed with 2.5-inch custom piping.

Fueling is handled by FIC 750cc
injectors, a high-flow aircraft-style fuel filter, -AN lines, and an in-tank 255-lph pump. A crushed first-generation BOV and a manual boost control made by Tom ekes out a tad more boost. Spent gasses used to spin the compressor are then expelled through a custom 3-inch turbo-back exhaust system. Tom tuned his combination with a DSMLink data logger and tuning tool.

The rest of the drivetrain can withstand the power increase thanks to the rebuilt transmission with a modded second gear and strengthened synchronizers. A custom Savannah full-ceramic clutch with a sprung disc is attached to an upgraded flywheel. Polyurethane mounts keep the engine and tranny corralled.

Taking his fabrication skills to the exterior of the Talon, Tom added second-generation Eclipse bumpers with custom mounts before performing all the bodywork and paint duties to transform the car from the original black to its current coat of white, silver, and black. The factory wheels got a polish and paint job as well to complete the look.

A Family Affair
Miami, Fla., resident, Jack De La Vega and his father have put together quite the Isuzu pickup with plenty of get up and go. They have turned the rollers to the tune of 251.9-wheel hp and 316.4 lb-ft of torque. To reach those power levels the father and son team use a T3/T60-1 turbo, a custom exhaust manifold, a Tial wastegate, an HKS SSQV blow-off valve, and a Dodge Shelby T2 intercooler with 2.25-inch piping. An aftermarket head filled with Calmini cams sits atop the stock short block. A Denso JDM Supra TT fuel pump sends fuel to a JR Impulse rail then on through 450cc injectors. Lighting off the mixture falls to the capable MSD 6AL ignition box, MSD 8.5mm plug wires, and NGK plugs. To make sure all the power gets to the ground Jack and his dad added a limited-slip differential and a Kevlar/carbon clutch.

Evolving Evolution
Some people are just plain lucky. The day after his local Mitsubishi dealer sold the only 2005 Mitsubishi EVO VIII they had on the lot, the very one Stephen Durbin of Costa Mesa, Calif., planned on purchasing the next day, seven more, including the exact model he was seeking, arrived. With his new car in hand it only took about seven months and $15,000 to go from stock to the state of tune seen before you.

The 4G63BT engine is treated to HKS 272-degree bumpsticks and a Blitz intake cone. Exhaust flows through a high-flow cat and out the HKS Hi-Power muffler. The stock turbo is kept in check with an A'pexi turbo timer and GReddy boost controller. GReddy's e-Manage controls all engine functions. Keeping the fluids where they belong are Samco silicone hoses.

The suspension has been treated to a full JIC coil-over setup, front and rear. A Carbing six-point lower arm in front and a 22mm anti-sway bar in the rear flatten out the ride. The 19x9 Racing Hart CX wheels shod with 235/35-19 Toyo T1R rubber ensures this EVO sticks to the road.

The braking system has been completely upgraded with 12.5-inch and 10.5-inch slotted and drilled Rotora rotors, front and rear respectively, squeezed by the factory Brembo calipers. Coursing through the stainless steel brake lines is Motul fluid.

If not watching a DVD on the Alpine in-dash player or listening to any of the six CDs in the changer pumping through the two 10-inch Kenwood subs, Stephen can glace at the Blitz BLM EGT and boost gauges.

The exterior has been treated to a host of carbon-fiber goodies, including the hood, trunk, door sills, and APR canards. The carbon-fiber rear wing was stripped of all its paint to show off the tasty weave. For night driving the stock bulbs have been swapped for some 8000K HIDs. Added to the front end lighting are Nokya Yellow fog lights. 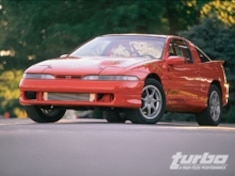 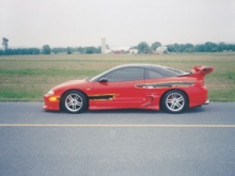 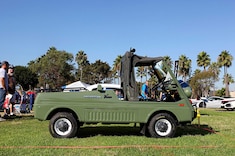