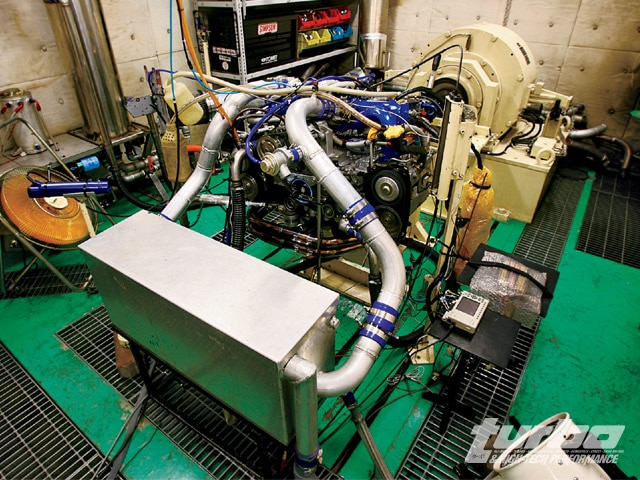 Photo 1/18   |   The Genesis EJ25 being tested inside Tomei's engine bench dungeon room. Here, the engineers can make precise adjustments without the engine being inside a cramped space. They can recreate any environmental factors like temperature and load.

It's amazing how much can be accomplished when it doesn't matter who gets the credit. In this second segment of Tarzan Yamada's dream team collaboration, the project is finally shaping into a tangible reality. Team Tarzan's quest to tear a new one for the American time attack scene is expected to put pressure on the rest of the contenders and current record holders. When the most famous time attack and drifting personality assembles an all-star team of the biggest and baddest engine, chassis, and aero maker from Japan, the result is nothing less than stupendous.

For Tomei Powered, Cusco, and Voltex, the most rewarding form of product exposure is to construct the ultimate race car. There can't be a better method of marketing than having these respected manufacturers display to the end users their products installed onto a race machine and having it rip through some turns.

As the follow up to the prelude article of this big-name collaboration, the project raises an important question that is burning inside our minds: What makes this car different from a U.S.-built time attack machine? The most straightforward conclusion that can be reached by most industry experts is a simple one: money. Thinking further, these corporations are all based overseas, so it may be difficult for the American eye to judge how much yearly capital one group generates to afford such a project. The truth is, many enthusiasts will startlingly discover, contrary to their speculation, that just because they are well known doesn't indicate that they are a tremendously wealthy business. It's debatable that independently each of these corporations will stand a chance against Japan's biggest aftermarket product manufacturer-in terms of budget and lack of specialization in different areas of the automobile. Lets take a look at an in-depth technical analysis that coincides with company philosophies of what crucial methods they have employed when building a serious time attack machine.

Tomei Powered is known for its ability to construct high-performance race engines while still maintaining great reliability for every level of motorsports. Subaru's horizontally opposed EJ25 boxer engine has been their prime candidate ever since Tomei acquired a huge victory with this engine at the '07 Hyper Meeting Battle at Tsukuba Circuit. This experience led the Tomei engineers to discover how durable a boxer engine really is, especially because it produces less fiction, vibration, and noise. The lightweight EJ25 sits relatively deep inside the engine bay for a lower center of gravity, and the weight balance is near perfection. Inside the rotating assembly, the pistons move left to right instead of the conventional up and down, putting less gravitational stress on the bearings and crankshaft. Tomei's lineup of EJ products, like their oil baffle stiffener, strengthened timing belt, and belt guide, are just a few of the components that are seen on the race car and can be purchased for any daily driven EJ engine.

The timely process of planning a Tomei crate motor all begins when Tomei Powered begins developing high-performance engine internals, usually starting with the camshafts. When enough components to make up a complete long-block are developed, the Genesis crate engine can be assembled and released to the public. Upon close inspection of the Impreza race engine, OEM components are found in the setup, like the valve guides, head bolts, fuel pressure regulator, water pump, and even the oil pump. The chief engineer, Akitaka Tomita, who embodies Tomei's profound engine tuning philosophies, reasons that the automobile manufacturers spend millions developing these OEM parts and therefore are yet unmatched by any aftermarket manufacturer of their quality, efficiency, and durability. Having great trust in OEM, Tomei still utilizes stock parts in their race engines simply because it works. This relates to their theory of: A great tuning shop will make their client's vehicle very fast by spending as little and with the fewest modifications as possible.

Being heavily involved in Super GT, Cusco took the initiative in engineering a chassis that is best suited for the conditions of the U.S. racetracks. Extensive data logged from the GT300 race car technology was adopted and applied to the unfamiliar U.S. time attack conditions. In essence, their creation is true to the saying "GT inspired." For each of their race chassis, Cusco's entire suspension and drivetrain components are calculated to extract the maximum performance from the tires. The current chassis and suspension setting for Team Tarzan's Impreza is accustomed exclusively for the Hankook Ventus Z214, which are highly sticky compounds to begin with. Cusco has spent an enormous amount of time developing a drivetrain system for their GT cars, which has substantially reduced friction characteristics. Of course, this technology has been applied to the time attack Impreza as well. Rubber engine and transmission mounts were replaced for completely solid units and to compensate for the added vibration, the entire frontend was stitch-welded and topped off with a Cusco power brace.

For the interior, rear crossbars were added to the rally bred, 22-point Safety 21 rollcage to comply with the strict NASA requirements. These 'cages are designed to handle up to two lateral g's while at the same time providing safety when the vehicle becomes upside down. The driver seat has also been offset slightly to the rear after considering weight distribution, combined with an extended steering wheel hub and organ pedals.

Engine performance and a stiff chassis are two essential aspects of a race car, however in the world where one-tenth of a lap time can make or break a record, aerodynamics must be taken into account. Voltex's genius aerodynamicist is also the president of the company, Akihiro Nakajima. He is responsible for creating some of the hottest-looking aero kits for Japanese vehicles today. These body kits are the most sought-after in the industry because every product is thoroughly tested for maximum functionality in a simulation wind tunnel.

The rear GT wing was set to provide a relatively mild level of downforce since this is the very first chassis Voltex tested. Voltex emphasized that it will be difficult to understand the reaction of the vehicle if a large amount of downforce is suddenly applied from the initial testing stage. Nonetheless, on an all-wheel-drive machine, the front tires absorb the majority of the stress, but it can be beneficial if rear downforce can be applied to alleviate some of this strain. The frontend, however, is a different story from the rear. A notable theory Voltex abides by is balancing the perfect ratio of incoming and outgoing air by the usage of specialized ducts, air directing sheet metal, and under diffusers. Unnecessary chassis lift may be experienced if improper calculations and misguided tuning is done. Since the front under diffuser produces massive downforce, it is securely fastened to the chassis to eliminate any movement. The aero kit seen on the Impreza can't be taken on and off easily, since it is a custom creation produced just for this project. Unfortunately for those Impreza enthusiasts, it is not available for sale nor are any production plans underway, but President Nakajima indicated that if there were enough demand, Voltex would fulfill the industry need.

Since each company involved with the build specializes in a single area of a vehicle, their combined efforts solved the funding obstacle of the project. It can be thought of as an all-star team where each member was assigned to an area of their expertise to make up the ultimate creation targeted toward one single objective. For Tarzan and the team, their goal to embark overseas to the U.S. time attack scene and shatter the existing record is drastically becoming a reality.