Discovered in the U.K., this Nissan 200SX on air suspension and Work wheels is giving the local stance and Euro communities something to worry about. 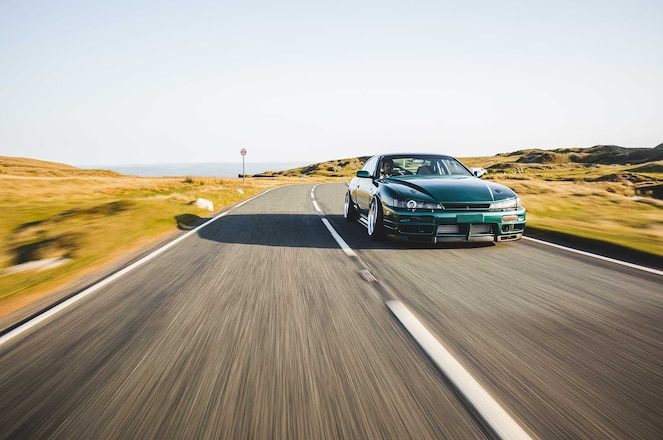 Kidderminster is a small town 17 miles southwest of Birmingham, England, smack dab in the middle of the island. In other words, the last place you'd think to find a gloriously modified Nissan S14. Americans know this body style as the 240SX and in Japan as the Silvia; however, for our friends across the pond, it's called the 200SX in certain territories. And unlike us stateside, the U.K. model receives a factory turbocharged 2.0-liter four-cylinder SR20DET (not the naturally aspirated KA), making it one of the cool kids among the local drift community; however, for owner Jay Pescaglini, he had other plans and that meant causing a stir in the country's healthy stance scene.

Like the majority of seasoned enthusiasts, Jay was raised in his household adoring cars at an early age, much thanks to his father, who buckled him into the passenger seat of a V12 Jaguar XJS and Datsun 240Z. Puberty happened, girlfriends came along; however, Jay's heart didn't truly start beating with a passion until he passed his driving test, saved up every penny, and picked up his first project car - a Vauxhall Corsa Sri. "This moment really kickstarted my passion. Ever since then, I have built up my tool arsenal and taught myself how to work on cars. It's a passion that will stay with me forever now." The Corsa was just one of many European project cars Jay would get his hands dirty with. His resume consists of three GSi models, one of which was a 300hp C20LET model. He's also owned a Saxo VTS and Seat Leon Cupra R, and currently sitting in his garage is a F80 BMW M3 that he daily drives. 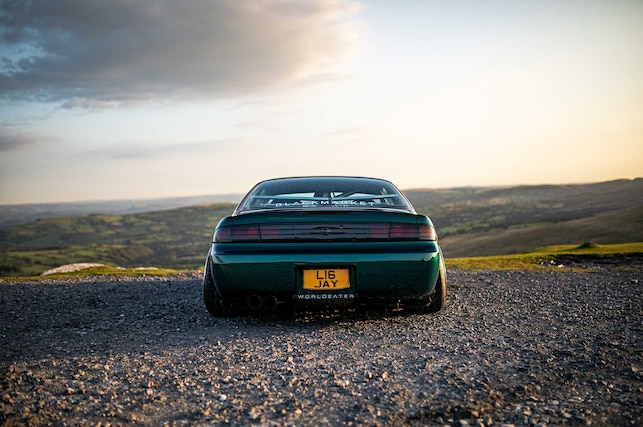 Discovering JDM, an Evo and the S-Chassis

"The JDM scene is pretty strong in the UK but I feel it's still clouded by the VAG scene [Volkswagen Auto Group]. Drifting takes up most of the JDM interest here but JDM show cars are starting to creep into show season more and more. I only started noticing the scene around 10 years ago when I started looking into buying an Evo, which eventually happened in 2011. But even before then, my friend had an S-chassis and I always loved the way it looked and how obnoxious it sounded! I really enjoyed helping him work on it and knew I had to get one myself eventually." Of course, the Evo VIII FQ340 MR was a great start as Jay carefully massaged the boosted 4G63 inline-four to 400+hp and tuned the suspension and chassis for road racing. This 1998 200SX came along four years later, and didn't start out as the perfect specimen, but instead, a laboring work in progress.

Chassis Restoration: From Rust to Riches

"I did the bulk of the work over the winter of 2017. It was a soul-destroying job! The car was all but dead with rust and rot throughout, but I knew I wanted to save her. I set about stripping and cutting the rot away and recruited a mate to do the welding. He put in 120+ man hours in welding alone! We did the whole job over six months with the car on stands in my garage. I pulled the engine and followed on to the front end over winter 2018, so the car is now completely rust free - very rare for an S-chassis here! It was the most rewarding, yet most challenging job I've ever done on a car and I won't be in a rush to do it again!" A rust to riches story, as we say here, which laid the groundwork for the respected show/street car you see today. 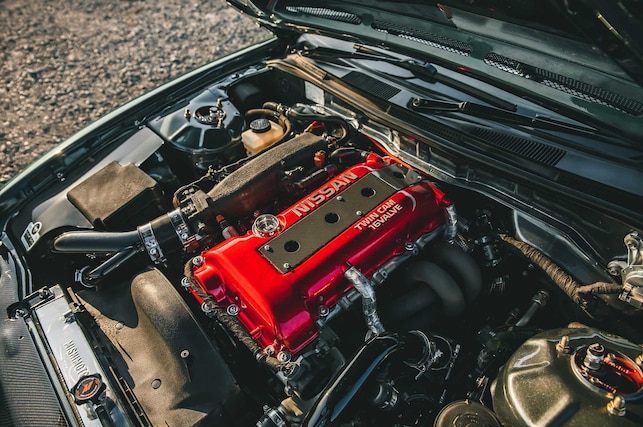 Under the hood, you'll find Nissan's standard issue SR20DET - a 2.0-liter turbocharged four-cylinder that didn't need much effort to get it to 300hp and 300 lb-ft of torque. The internals remain stock while a larger Garrett GT28R was shoved into place, along with accompanying upgrades such as the manifold, uprated fueling components, downpipe and exhaust. Other add-ons ensure the powertrain stays happy such as the front-mount intercooler, stiffer engine mounts, heatshield, catch can and ACT clutch.

Continuing underneath the car, Jay ensured all the suspension components were up to par. New toe arms, sway bars, camber arms, control arms, tie rods and bushings were installed from brands like Hardrace, Driftworks and Energy Suspension. Originally, Jay was dropped on coilovers but in order to maintain that extremely low look without the headaches, he looked into other options, which meant air. "I ran it very low static, but it was getting to the point where I was incapable of any spirited driving. I always wanted to focus on the stance direction for the build and the Air Lift 3P kit brings the performance back but also allows me to achieve my ideal stance for shows." We've been skeptical on the handling capabilities of air suspension over the years, but after hearing stories from countless air-equipped feature car owners like Cody Miles' time attack STI and Twiggy Giang's Scion FR-S from our Show Car Shootout, Air Lift Performance knows their shit and Jay is yet another successful case study that squashes this particular stereotype of the stance scene. 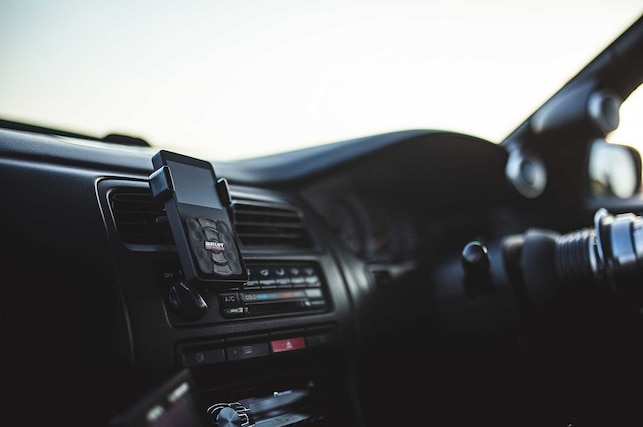 Now sometimes builds with air suspension are "too stance," with ridiculous body kits, ugly color schemes and terrible wheel choices. Jay's does it just right and sends a message to his local JDM community. "I went for a clean, neat stance build. The majority of Silvias over here are purposeful drift cars which tend to be dressed in battered up big body kits. I wanted to focus on a stock, OEM+ look but still very wide and very low! I have added lots of little custom touches too, which always get commented on."

No need for an aggressive face, the stock front bumper has been smoothed while the rest of the body features Ziax side skirts, JDM Zenki rear and retrofitted Z32 rear diffuser. There's also an Origin Labo hood, Chargespeed front wings and SRB rear over-fenders, which sound over-the-top at first, but when painted the factory Emerald green, everything just seems to flow nicely and give this S14 a soft touch as opposed to being sore to the eyes. And of course, Jay's wheel game is on point with wide 18x10" front, 18x12" rear Work Meister S1 wheels wrapped in Falken FK150 tires.

Inside the cockpit, the 200SX is mild and mature, not stripped of its creature comforts or abused like a drift car. Jay tells us the seats were probably the hardest part to find for the project. "I love Recaro recliners so trying to source a matching pair of SR3 or SR4 was very hard!" The half cage is the only other hint the interior is modified while the dash, door cards, carpet and headliner have all been retrimmed or upholstered to look fresh.

"I'd like for my car to be remembered as a proper, no BS, home-built Silvia. I am a fond believer in if you want to get into modifying cars, you must learn to work on them yourself. Even if you have no knowledge, get on YouTube, get a cheap tool set and start taking bits off. These cars are very easy to work on, and cool in every possible way. Nothing beats investing your own blood, sweat and tears into a car, then driving it to a show or a friend's house on a sunny day. My advice to anyone thinking of buying a Silvia is don't even look at the mods list of pretty pictures in the for-sale ad. Get a jack and get underneath it. The condition of the chassis is all that matters with these cars now. Trust me. Other than that, buy one and enjoy it as they're fantastic cars to own with a great community of people."

Well said from a brave man who took a rust bucket and developed it into a gem. You might not have heard of Kidderminster before but after today, you're sure as hell going to remember who Jay Pescaglini is along with his stunning Emerald green 200SX S14 on air.