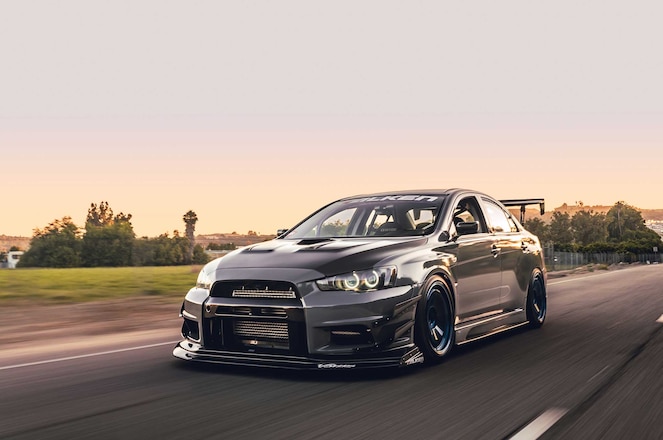 This 2013 Mitsubishi Evo X is one of the last of its kind. At the end of 2015, whatever fans Mitsubishi had left, began to dwindle away. Why? Because the powers-at-be made the executive decision to cease production of its iconic, rally-bred, all-wheel-drive high performance sedan known as the Lancer Evolution or what we commonly refer to as the "Evo". Mitsubishi messed up big time, and since then, enthusiasts who hold the three-diamond emblem in such high regard have either jumped ship or clung to every last Evo sold. Albert Abundis of Southern California is but one of a handful of loyal owners.

THE EVO X: AWESOME OUT OF THE BOX IF YOU'RE A SPORTS CAR GUY

After getting his hands dirty first with a Nissan S14 and two Infiniti G35 project cars, Albert picked up this GSR model brand new in December of 2013. "I was looking for a family car—four-doors, turbo and something fun to drive. It was either the STI or Evo X. I picked the Evo because it's more aggressive looking on the streets." At a sticker price of around $35K at the time, the Evo X came with a sophisticated all-wheel-drive, all-aluminum 4B11T 2.0-liter (1998cc) inline-four turbocharged engine that made 291hp and 300 lb-ft of torque. The top-of-the-line MR model received a six-speed manual, BBS wheels and Eibach/Bilstein suspension; however, for the GSR, a worthy five-speed was standard issue, along with 18-inch Enkei wheels, Brembo brakes, Recaro seats and a pronounced rear spoiler. It was a sporty sedan that was touted by most automotive journalists as an out of the box hero on the track and winding roads, handled 'n gripped in the head of its glass, but too loud and stiff for everyday driving, not to mention the interior wasn't the prettiest. Of course, for Albert, all he needed was a good foundation for what he had in store next: an aggressive street-tuned project car with a touch of JDM style and more than enough usable power to back it up. 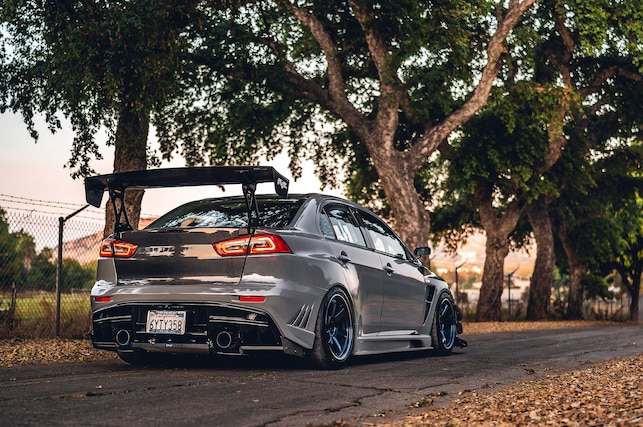 "There are many Evos out there that inspired me. I would go on YouTube and lookup videos of Varis Evo Xs, and from there I got hooked. I would check out Bulletproof Automotive and see all the Varis parts on their site. 'One day, I'll have my car like that. '" And sure enough, that's exactly what happened. Albert ordered up virtually the entire catalog which included the bumpers, V2 front fenders (8mm wider than stock), side skirts, diffusers, taillights, carbon hood, trunk, rear wing, and even the little titanium license plate brackets.

Now, if you've followed the car scene long enough, then you know the majority of Evo owners either slap Varis or Voltex parts on their car. To differentiate his Evo, Albert chose a color scheme which he claims is the first Evo X to do so. The Audi-derived Nardo Grey-like vinyl wrap, called Battleship Gray, was applied to the sedan. Next, he installed a set of 18x10.5-inch TE37RT wheels in Mag Blue. In our opinion, blue wheels don't work on most cars but in Albert's case, everything flows (those massive blue Endless brakes look sweet as well!).

We've seen Mitsubishi's 2.0-liter 4B11T four-cylinder make a ton of power from the get-go—sometimes 400-500hp without even touching the bottom end. We've also seen 1,000+hp examples at the track. Albert knew this all too well and reasoned on something in between 600-700hp—enough to embarrass every Evo and STI owner with bolt-ons, and reliable enough to withstand regular weekend torture. 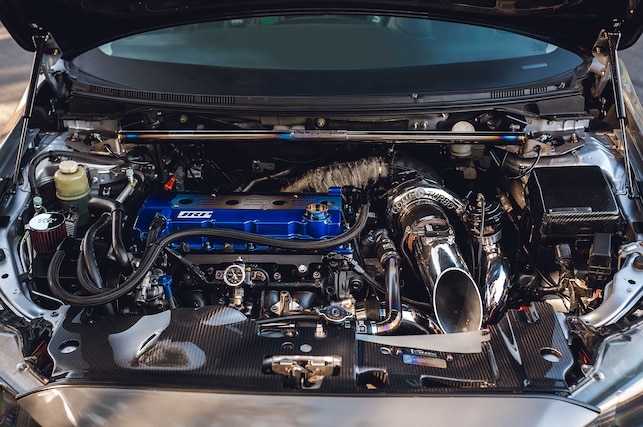 Once local JRP Performance built and sleeved the engine, Enticed Motorsports took over where they developed a sidewinder manifold setup, fabricated the open dump, rebuilt the engine harness and more. The new manifold relocates the turbo to the driver-side of the motor instead of behind it, which in theory takes the turbo away from an area that gets extremely hot and results in warmer temps and less power. We spoke with Jonathan Oregon of Enticed about its design: "I had done the manifold design a few years prior on another customer's car and basically took the concept from my experience with working with Honda K-Series engines. The Evo X engine is very similar to the K20 and both manifolds have a problem with heat due to its placement. The first few turbo manifolds we made were top-mount and bottom-mount; however, both locations still had the turbo sitting behind the engine next to the firewall. Although they made power, we noticed a significant loss after a few passes on the dyno and higher temps. So, the setup was only efficient for a few passes—more of a kit suited for drag cars, not to mention we started to see a few other people have problems catching fire."

After several months under the knife, Enticed also reworked the intercooler setup, its plumbing, added AN fittings, fuel upgrades, and relocated the ECU and power junction with a result being more than what Albert could've ever asked for—624hp and 513 lb.-ft of torque. "I run my car on E85 all the time," Albert continued. "The car drives amazing and the power is super responsive, especially with a triple ball-bearing turbo that's ready to spool. The sidewinder setup gives the car a different sound, a deeper tone, and when you punch it, the open dump screams!"

In case you haven't heard of Enticed Motorsports, don't miss their 1993 Mazda RX-7 that was featured in the recent JACKBOYS music video. 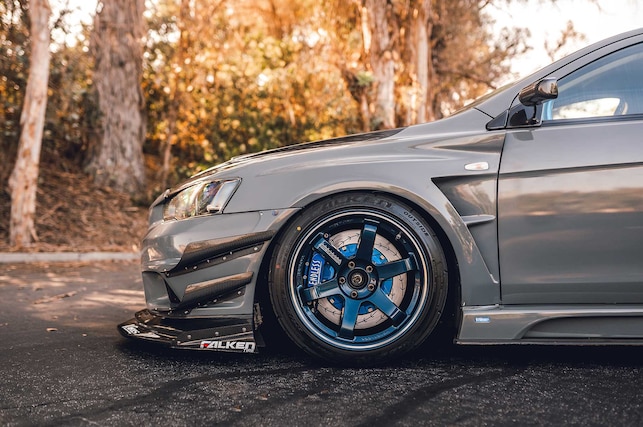 One final thing we'll touch on with Albert's car is the suspension. It's not air ride and it's not your traditional coilover system. It's comprised of Fortune Auto's advanced 24-way adjustable dampers controlled from inside the car and based on just the right stiffness from the springs and the air piston system. "The Fortune Autos are one of the best parts that I have gotten on the car. I'm super happy with them because they ride so smooth. The EDC system makes it even better as I can adjust from stiff to soft in seconds. Another reason I love this system is because when I'm driving a low car and I come across a driveway, the air pistons come in handy. With a touch of a button, my front end comes up and I'm able to go up or down the driveway without damaging the front lip or bumper. I've always been a static guy with all my cars and never was a fan of air bag systems. With this system, everything is better, and I get the best of both worlds."

In closing, we asked Albert what the rarest part on the car was. "I'd have to say the HKS oil cap because it's discontinued." That might be true for Albert, but it had us thinking that well-executed Evo projects are becoming a rare breed as we enter the show/track season of 2020. Mitsubishi has left us hanging for five years. Will they ever come back? Rumors of an Evo XI arose last year in Europe, but nothing is certain at all. For now, we'll have to appreciate the Evo enthusiasts still keeping it real, like Albert and his 624hp, Varis-clad Evo X.