Because explosions are cool. 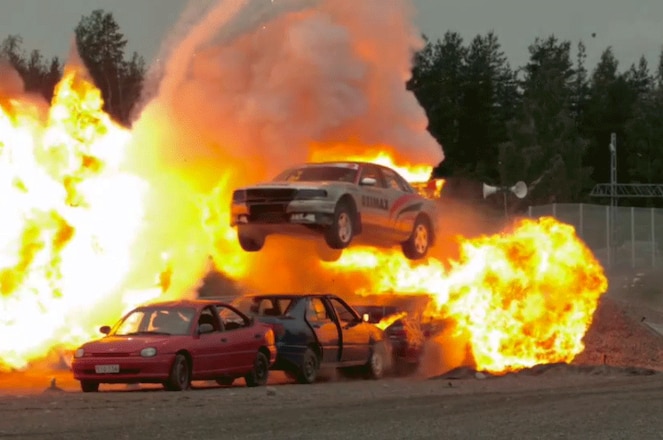 Many people slow down after retirement, but former hockey player Teemu Selnne is doing anything but. The ex-Anaheim Ducks right wing jumped a rally car over three exploding cars for an episode of "Posse," a show that airs on MTV3 in Finland.

When he was active in professional hockey, Selnne's nickname was "The Finnish Flash." But the Finn has also been involved in rallying for many years. Selnne contested the WRC's Rally Finland twice in the 1990s under the pseudonym "Teddy Flash." Now that he's retired from the NHL, Selnne has time to revisit his other passion in life. The vehicle of choice for this stunt is an Audi 80, the precursor to the A4. The car appears prepped for rally competition, with a rollcage, safety nets, and large aftermarket rear wing. The Audi gets a running start before launching off a dirt ramp. The pyrotechnics begin as soon as the car catches air, with the three junkers below exploding in sequence. It's a movie-grade stunt that looks even better in slow-mo. The landing is hard enough to deploy the passenger airbag, but the driver and navigator seem no worse for wear.

Check out the stunt in its entirety in the video below and rethink your post-retirement goals. Fast forward to the 2-minute mark for the start of the action.