Home  |  Features  |  What Is Time Attack?
Subscribe to the Free

Time Flies: A guide to Japanese-bred time trial competition in the USA 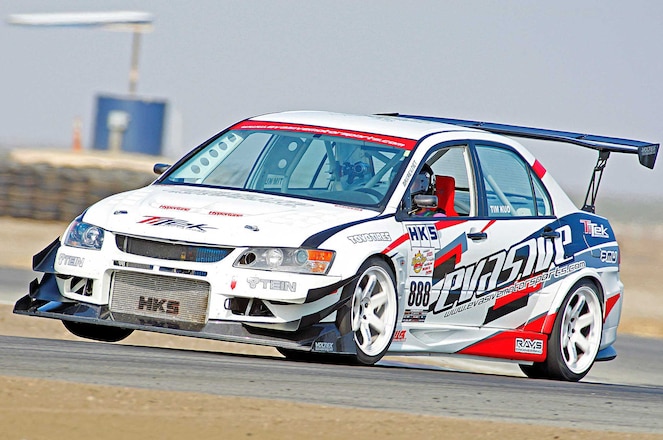 Nothing stops the true enthusiast from taking an otherwise average car and turning it into something extraordinary for the sole purpose of being able to claim they are the fastest. Like a lot of motorsport, this is the essence of Time Attack, a style of circuit competition with roots in Japan that today extend to the United States, Australia, and beyond.

Time Attack is a timed test of a driver's ability to push their car to the limits on an unimpeded road course to achieve the fastest lap against other competitors. The premise is that street car-based vehicles on "street" tires are attempting to turn the single best orbit around a given track. To win a Time Attack challenge, there's no half-assing most parts of the car; the drivetrain must be as well developed as the suspension, and an experienced hotshoe at the helm is also critical. There are no points for style in Time Attack; the discipline is judged solely on a person's ability to beat the clock.

Time Attack began in Japan in the 1960s, evolving into events where tuning companies and enthusiast media joined forces to put on competitions at places like the renowned Tsukuba Circuit. The scene gave rise to iconic cars like the HKS CT230R Mitsubishi Evo and Scorch Racing Nissan S15 Silvia and helped make drivers like Tarzan Yamada and Under Suzuki JDM superstars. In America, Time Attack has been around since 2004-ish (our forebears at the now defunct Sport Compact Car claim to have put on the first one) and is currently administered by one major sanctioning body, Global Time Attack (GTA), with a few smaller series and one-off events around the country, including Motovicity's Speed Ring and the comps run by Gridlife.

GTA also happens to operate probably the biggest single TA event in the US, Super Lap Battle at Buttonwillow Raceway Park in California each November, which is what that first event in 2004 ultimately grew to become. Prior to that, and even through today, club racing time trials (TT) have been sort of the proto-Time Attack in the States, the Sports Car Club of America (SCCA) and National Auto Sport Association (NASA) both devoting TT classes to street cars of all various degrees of modification.

There are also currently thriving Time Attack scenes in Australia, New Zealand, Europe, and elsewhere around the globe.

Time Attack vehicle classes are generally broken down by drivetrain layout—that is, which wheels drive the car (RWD, FWD or AWD) and/or where the engine and drive wheels are situated (FF, FR, MR, etc. )—and degree of vehicle modification, from entries with simple bolt-ons all the way up to Unlimited Class cars that have built engines, full rollcages and aero, and seriously meaty tires under the fenders. Events are staged at permanent tracks but can be adapted to suit most road course venues; Super Lap even once ran on the famous Long Beach Grand Prix street circuit in April 2008. Cars are spaced out on track in an attempt to help drivers race unobstructed, but often that doesn't prevent traffic, so in addition to beating the clock drivers also regularly have to take into account the slower guy in front and the fast-approaching guy in the rearview mirror.

While you can take any car to a Time Attack, there are certain platforms that are identifiably more popular because they tend to perform better on track, or at a minimum are easy to modify to do well in that environment. In the US, Mitsubishi Lancer Evo 8 and 9 and R35 Nissan GT-R are common AWD models, as are Subaru WRX (and not just STI, either); indeed, Super Lap Battle's current fastest ever is Richard Boake, who in 2018 drove the Can-Jam Motorsports Prestone STI to an overall event victory that rewrote the record lap at Buttonwillow to a 1:38.281. Of the top 10 fastest cars in Super Lap's Buttonwillow history, 8 are AWD.

Familiar front engine, RWD (FR) Time Attack platforms in America include Honda's S2000 roadster, BMW E36, E46, and E92 3-Series coupes, and of late Toyota 86/Scion FR-S numbers seem to be growing, too. Finally, there is no denying the pure dominance of Honda platforms when it comes to front-wheel drives; Integras and older Civics—in particular, often engine swapped 5th and 6th generation models—are typical go-to weapons of choice, but since the FK8 Civic Type R dropped in 2017 those have grown in popularity at Time Attacks as well.

And speaking of Honda Civics—one in particular sent waves reverberating across the US Time Attack universe in 2018 that are still being felt today. At a GTA Pro-Am, Canadian William Au-Yeung driving his highly developed Vibrant Performance PZTuning FG4 Si reset the Buttonwillow Time Attack record with a flying lap of 1:37.308, lopping more than 1.5 seconds off the existing high mark—and the compact was remarkably still FWD (see section above about AWD might in TA for perspective). As far as drivers and teams that are involved in the American Time Attack landscape, none has the pedigree or legacy of Evasive Motorsports in Santa Fe Springs, Calif.; they've been down since day one, and all of their Time Attack cars have gone on to some fame in enthusiast media.

Though Time Attack has not yet had many huge mainstream successes via media or spectator-heavy events, it has created a highly aggressive and tightly knit community of followers, attracting all levels of drivers and builders from around the world to go to TA events and compete. Even the style of Time Attack cars has struck a chord among modifiers, but the essence of the sport cares little for fashion. It's all about the function of your machine and being able to squeeze every last fraction of a second out of it. Looking good just comes with the territory.

What Is Time Attack?
Photo /