Updated June 2020 - From the Editors: This article by tech guru Mike Kojima from a dozen years ago is a strict look at shifting around weight—like your car's battery—for the purposes of improving vehicle handling. In the time since it was first published, battery relocation has become one of the first things you do when you're cleaning up the engine compartment of a build, especially if you're thinking about a wire tuck. Regardless of why you want to move that battery, this article is a wealth of useful information to begin with.

In setting up a car for handling, it's preferable to attempt to attain a 50/50 weight distribution so that all of the wheels share the load of getting a car around a corner as equally as possible. For drag racing, one strives to get as much weight as possible over the drive wheels to help traction. A car's heaviest end is often the opposite of what is ideal, such as a front-engine rear-drive car or a front-wheel drive car.

To try to improve weight distribution, race car builders have resorted to things like setting the engine back to get more weight where it can do good. This is fine for the serious racer but out of the question for the average enthusiast. But what if you found out about a mod where you could get the same change in weight distribution as setting the engine back 5 to 10 inches that took very little time and money to do? You'd probably jump all over this, right?

You can get all of the benefits of setting the engine back by simply relocating the battery from the front of the engine compartment to the trunk. This simple mod can change the weight distribution of a car from 1 to 2 percent. This is a big difference that can easily be felt by the driver in terms of less understeer and/or better traction. 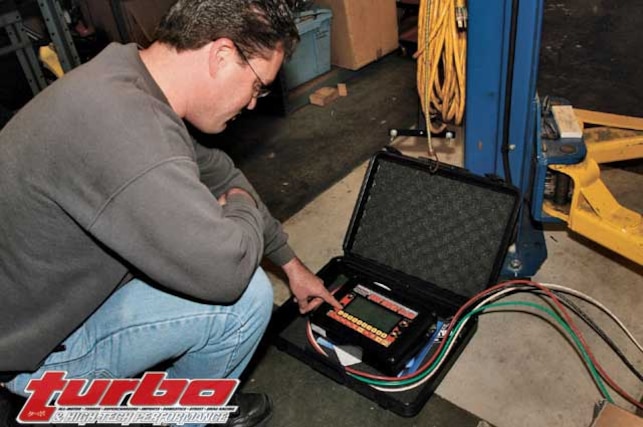 With the assistance of Steve Mitchell of M-Works, we took a drift modified AE86 Corolla and put it on corner scales with 200 pounds of weight to simulate a driver in the passenger seat to show the remarkable effects of a simple battery relocation project. We moved the battery around the inside cabin to showcase the differences in weight distribution by simply altering the battery mounting position.

Corner scales are electronic scales used to set up the chassis of a race car with adjustable coilovers. The spring heights of each corner are adjusted to get a 50 percent crossweight percentage with the driver's weight in the seat. When the crossweight percentage is 50 percent, the car will have an equal balance in left and right turns, regardless of the driver's offset weight in the car. The more balanced the better the weight distribution.

Here is how our experimental stock Hachiroku weighed at each corner. 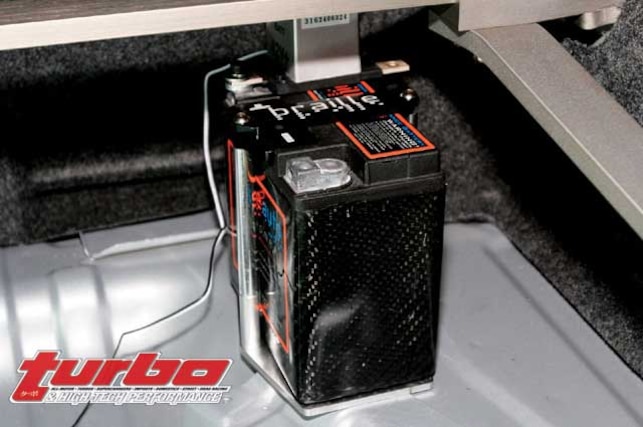 As you can see there is quite a bit of difference between the left and right weight of the car. The crossweight isn't bad considering that the car hasn't been corner balanced.

Now we moved the battery to the right side of the trunk. 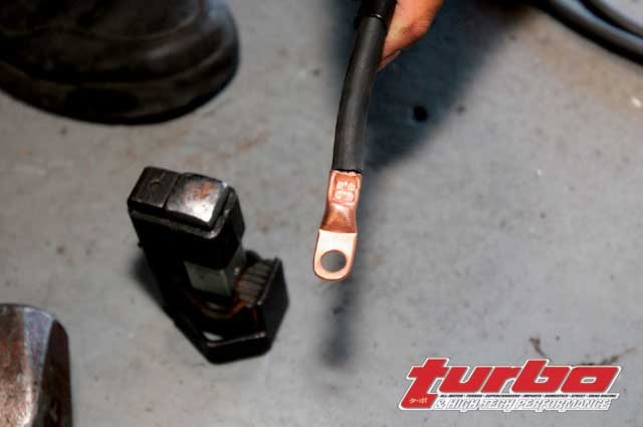 You can see the weight from the right side of the car to the left side is much more equal. Best of all, the front-to-rear weight percentage has improved by 2 percent, which puts the car pretty close to the ideal 50/50 weight distribution. This has the same effect as setting the engine back around 10 inches. A 2 percent difference in weight distribution is easy for a driver to feel.

Next, we moved the battery to the left side of the trunk to see what would happen.

Although the weight bias is more to the heavier left side of the car, it's still much better than stock. The crossweight percentage is even better but this can be deceiving, as it could easily be zeroed out with some slight adjustments of the coilovers. The right rear of the trunk is the best place for the battery.

Sometimes you can't fit the battery in the trunk, or you want to keep the car's polar moment of inertia low for quicker transitional handling. To visualize polar moment of inertia, imagine trying to twist a set of dumbbells back and forth from the handle. Sort of tough, right? Now imagine trying to twist the same weight in your hand if it was a compact sphere. This is much easier. A car, with its mass located closer to its center, will respond to steering input faster. So, if you want to reduce your polar moment of inertia more than improving your overall weight distribution, you'll want to place the battery within the car's wheelbase.

Let's see what happens when the battery is placed behind the passenger seat.

Placing the battery behind the driver seat resulted in these weights.

This method wasn't as good but it's still definitely way better than in the stock position. Now you can see that relocating the battery is as good as most expensive fabrication procedures. What's stopping you from doing it?

Many companies make and sell battery relocation kits. You can simply purchase and use one of these. There is a caveat though. Many kits, even those offered by famous and reputable companies, use flimsy stamped steel or thick-formed wire battery mounts and brittle plastic boxes for their kits. In an accident, the heavy battery can easily deform or break these mounts and bust out of a fragile battery box becoming a 40- to 50-pound missile filled with acid hurtling around the inside of the car. This sort of thinking can kill you instantly if it hits you in the wrong spot. A loose battery can strike you with melon-crushing force. We've seen this happen several times in racing accidents. 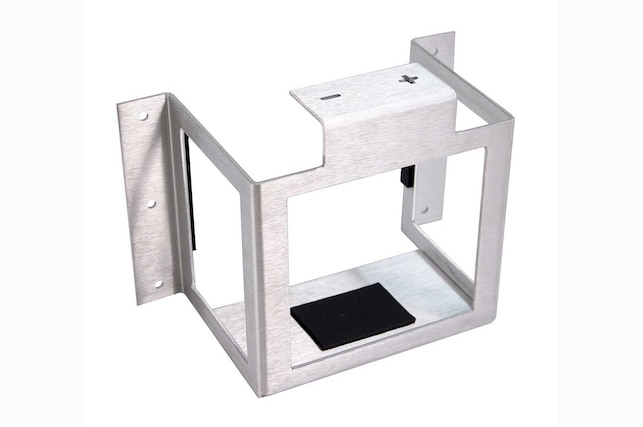 For this reason, we recommend heavy-duty billet-type mounts and the use of gel cell-type batteries or full metal enclosures bolted to the solid parts of the chassis with grade five bolts and large fender washers if the battery is anywhere near the driver's compartment. This precaution also goes for trucks if there isn't a solid welded-in bulkhead between the trunk and the driver's compartment. Remember a battery can generate a sledgehammer-like blow of hundreds of pounds of force in a crash and you have to keep this in mind when you choose or build mounts.

Also, check the rules of whatever racing sanctioning body you might run under before starting a battery relocation project. The NHRA requires metal battery boxes vented to the outside of the car unless a dry cell-type battery is being used. The NHRA also requires an external accessible rear-mounted remote battery shutoff switch for trunk-mounted batteries. Most road racing associations require metal boxes unless the battery is a sealed dry cell type and has externally mounted cutoff switches marked with a triangular-standardized label. 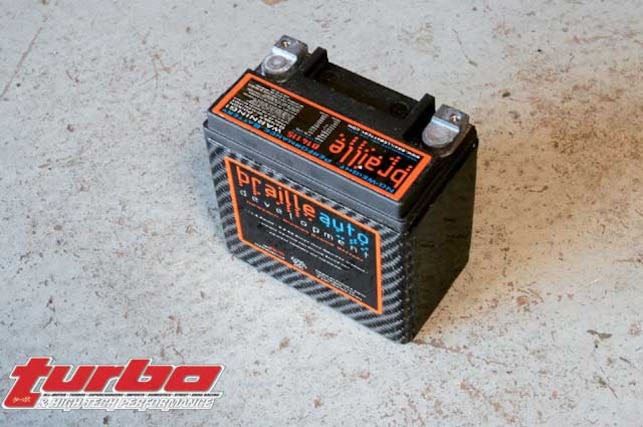 Because of the hazard issues with normal lead-acid batteries-how they tend to emit flammable hydrogen gas and spew sulfuric acid-it's a good idea to go with a sealed racing dry cell battery. This also makes it easier to comply with a racing sanctioning body's rules for venting. Dry cell batteries have a dry paste instead of liquid sulfuric acid electrolyte, which is less likely to splash, spill around and burn you up like the blood of the beast in Alien. Dry cells don't emit Hindenburg burning hydrogen gas either. Hawker Energy, Braille and Odyssey make lightweight compact dry cell batteries and Optima makes full-size dry cell batteries. Most of these companies make sturdy billet or sheet metal-type mounts suitable for proper mounting.

Lead-acid batteries are also very heavy. A typical stock battery for a four-cylinder compact weighs about 40 pounds and a battery that cranks over a large V-8 easily weighs about 50 pounds. A dry cell battery that can power your street car like an Odyssey 680 or a Braille B14115 weights only 11-15 pounds. Using one of these batteries is an easy way to instantly shave 30-40 pounds from your car as well as improve weight distribution. Smaller batteries like these aren't advisable if you're running a lot of lights, such as rally or night enduro racing or if you're into having large amounts of I.C.E. in your car. In this case the companies that sell dry cell racing batteries have units weighing about 20-25 pounds- half the weight of the stock batteries with superior power capability. 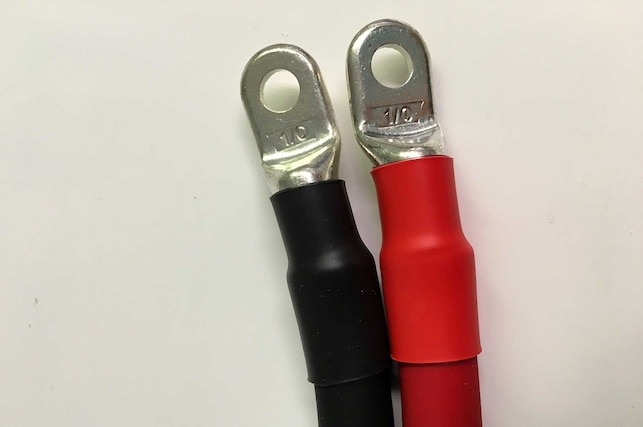 For cable, we recommend a copper conductor heavy-gauge wire since starter motors have the highest amperage draw of any electrical part in a car. We prefer welding cable as it has very low resistance. We use 0-gauge for trunk-mounted batteries due to its low resistance. If you have a tough-to-spin, big high-compression V-8 motor, you might opt for the thicker even lower resistance 00- gauge wire. You can look at aircraft supply or marine supply houses for terminal ends and crimpers to terminate your cables properly. Dry cell battery makers also usually sell these items as accessories.

It is important to route the wire correctly. Remember that if the wire's insulation wears or chafes, you'll have a major short circuit and the potential for a really nasty electrical fire. In most cases we prefer to route the main power wire through the interior of the car so it's less likely to be damaged. It's important to secure the wire in many places using captive zip ties and/or rubber-lined adel clamps so that it can't rub and flop around. Also, use a circuit breaker like the type found in car audio, marine and aircraft supply stores or heavy-duty marine slow-blowing fuses to reduce the damage if something does cause the wire to short.

Relocating the battery is a good way to spend an afternoon that will give you a big gain in handling and can reduce overall weight for very little money.

The Hows And Whys of Battery Relocation - Garage Tech
Photo /

What Is Rod Ratio?
SuperStreetOnline how to

2018 Honda Civic Si Project Car Gains 130 Horsepower and Over 120 lb.-ft. of Torque!
SuperStreetOnline how to 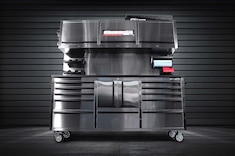