Home  |  How To  |  Additional Tech  |  Mitsubishi Mirage Project, Part 1
Subscribe to the Free

It's time we came clean. We've had a Mitsubishi Mirage on loan from the Mitsu folks for several months now. OK. So it's been more than several months. It's been more like six or seven. They loaned us the car so we could showcase the potential of the Triple-Diamond Civic-fighter. We, of course, welcomed the opportunity.

So what have we been doing all this time? Well, we may not have as many project cars as some other people, but we try to do a thorough job on the cars we do have. What that means is when we start a project, we like to run it as a concise series of stories that highlight the buildup (Our Super Neon, for example). So instead of running one story every nine or 10 months, we thought we'd sit on the stories until we had enough competed so we could run them in some semblance of order. When that didn't happen, we figured we'd better just get going and start running the stuff we had and take our chances with the frequency of the articles. After all, if we need to, we can just run 50 or 60 stories on the same project and call it exciting.

What can you expect from our Project Mirage? As always, we will start off doing the type of upgrades that most of you begin with. We'll show you how we dropped it and dressed it up with new wheels and skins. After a long search, we found our fair share of bolt-on performance parts to squeeze every last ounce of power we could out of the 1.8L powerplant. We've also done our fair share of aesthetic upgrades, too. We could tell you more, but what would be the point? For now, you'll have to take our word for it when we tell you that it turned out cool. So far. We're far from done. As long as Mitsu lets us keep the car, we'll be finding stuff to make it better.

And before you get those keyboards fired up to shoot off a few lines telling us how you don't want the Mirage to turn into another Super Neon, you'll have to believe us when we tell you that we're doing everything we can to make sure that doesn't happen. Hey, we've had the Mirage for more than six months, and we still know its location. For us, that's a pretty good start. Stop! Can’t stop? Front brakes not behaving the way they should? Then maybe it’s time to replace those stock rotors. And if you drive a Mirage like ours, Power Slot has

We now return to our regularly scheduled Project Mirage story. The last time we saw the Mirage, it had been given a nice low stance and a brand-new set of shoes

Meet Lance, our Project Mirage. He likes long walks in the forest, soft love songs, and blowing past unsuspecting bystanders on the street. But like any red-blooded stud of a car, 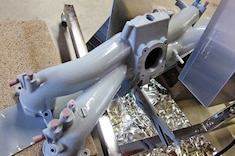 Do It Yourself Powder Coating - Tricks of the Trade