Got A Light?
I just want to start by saying, I love eurotuner, it’s better than chicken. My question is this: I just got a pair of Votex smoked long foglights and I’m just curious if you have any suggestions on how to mount them? I know how to (they just snap in like the reflectors they’re replacing), but I don’t want someone just snapping them out to steal them. What would you guys do?
Rich
Via the Internet

Well, you’re close but not entirely correct. They do snap right in, but it takes a bit of trimming on your bumper. They are made for Euro-spec cars. If you already have Euro bumpers you shouldn’t have to worry, otherwise you must trim a small section where the blank would normally go. As for your question on mounting them so they don’t get stolen: You could always use Crazy Glue—it did hold that guy in the commercial from an I-beam. It might make it hard to replace the bulbs, though. Or you could try parking it in a garage. I’m sure if someone really wants them, there is little you can do about it. If you have any more questions about the install, call Matt at Tuning Zubehör, he’ll be glad to help you. You can reach him at 805/526-9577, or check out www.tuningzubehor.com.

Boosted Ride?
I hope you can help me make a decision about my ’98 Jetta VR6. I can’t decide whether to go with the Z-Engineering supercharger kit, AMS supercharger kit, or an ATP turbo. I’m trying to get my car down into the 13s without sacrificing reliability. Is the Z- Engineering kit enough to do the trick? I have installed a 2.5-inch after-cat exhaust, 3-inch cat, P-Chip, and P-Flow intake. As for ATP, I’ve looked into its stage 3 turbo kits. Is it likely that it could destroy my engine due to the boost at 9 psi? Also, what about the AMS supercharger boost at 8.5 psi? Is that too much? I’m having a hard time making a decision. Of course, all three companies swear that their system is safe and will not harm the engine due to the compression increase. They also say that no permanent modification is needed. Is that true? What do you think is the best way to go?
Aaron
Via the Internet

Aaron, I can’t decide for you, but I can explain the differences. If you aren’t so much a hands-on guy but want the power, I would go with a supercharger. It’s not that a turbo is unreliable, it just requires more tuning. If you don’t like to wrench on your car a lot but want the added power, the supercharger is the way to go. On the other hand, the turbo setups are much more scalable. The supercharger, to some extent, will come with all the power you will ever get from it. The turbo will let you add boost as you see fit. Both will send you rocketing into the 13s if you can drive the car. As far as your question on blowing up the motor because of this, it is always a good bet to build the motor when doing forced-induction. None of the setups you listed will blow a motor at those boost levels. The VR6 is quite the beast; it can take a lot before it lets go. If you run more than 10 psi you will want to lower the compression, either with pistons or a head gasket. I could go on for days about this, but instead of making my hands sore I'll just give you a number. Call Tim at New Dimensions at 408/980-1691, or visit www.newdimensions.com. He deals with turbo and supercharged cars all the time.

Got Mods?
I am a converted European car fan ever since my eye caught this magazine. Everyone and their momma owns a Honda! I want to be a leader, not a follower. Now that I got that off my chest I have a couple questions on vehicle potential. I would love to get an Audi or VW 1.8T, but they seem to be out of my price range because I’m still in college. I have seen that the VW Golf GTI VR6 from ’95 and up seem to be selling within my budget. I was wondering what would be the car’s potential and if it is possible to add just bolt-on parts so I could reach my goal of mid-to-high 14 e.t. If you can help point me in the right direction, I would appreciate it.
Bobby Khounphaysane
Via the Internet

Let me start by saying this: If you really want to be a leader, I suggest throwing a big-block Chevy motor into a Yugo. I haven’t heard of anyone doing that. It technically qualifies as a European car. Imagine the sleeper possibilities. While you ponder that idea, I’ll answer your other questions. With a VR6 it is very easy to get into the mid-to-high 14s. Stock they can run anywhere from a 15.0 to 15.6. The real trick to tuning a VR6 cheaply is to let it breathe. For mods, I would look at a chip first then intake and exhaust, after that look at cams. Once you have reached that point, call Tom at Renner Motorsport at 310/673-8492 or on the Web at www.rennermotorsport.com. He can send you in the right direction for more in-depth mods to the motor. For some other ideas, take a look at our October issue with a 12-second all-motor VR6!

Knock? Knock?
I have a ’92 2.0L 16v with Motronic injection that I recently rebuilt. I have everything correctly assembled except that I couldn’t remember where one of the knock sensors was supposed to be bolted to the engine. I have one that I know is correct, on the top left of the block behind the alternator. Anyway, where does the other one go? I can’t find a picture or diagram anywhere (not even in my Bentley manual). I haven’t been able to find a good example here in town either. I hope someone there can help me with this. Thanks.
Brian D.
Via the Internet

Brian, you happen to be in luck! We have a 16v expert in the building—he’s gagged and bound in the supply closet and he gets a bagel every Friday. Enough about him though, let’s get to your problem. If you look over to the other side of the block in about the same location as the other knock sensor, you’ll see where it mounts. It is between cylinders 3 and 4. The plug is dark blue and is in close proximity of the distributor. If you have any more questions, give Ron at VW Specialties a call at 714/848-3766, or check out www.vwspecialties.com. He can help you with just about any question you have on your car. 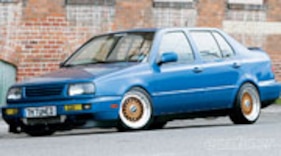 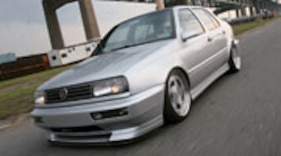 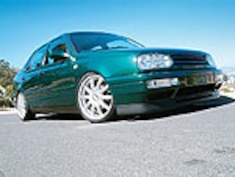 Proving that Euro enthusiasm is a global trend, we were contacted by 1998 Volkswagen Jetta 2.0 owner, Noor Abrahams of South Africa, and he tells his story here - Eurotuner Magazine