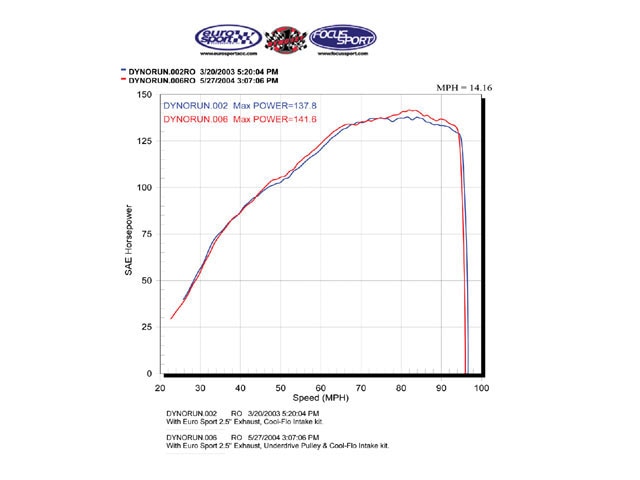 Bzz, Thanks For Playing
Q: I've just finished reading the Aug. '04 issue of eurotuner and was hoping to shed some light on the matter of tweaks to the magazine, but unfortunately, I'm new to the eurotuner "experience." If it's been changed over the past few months to the current format, then I have to agree with the modifications; I find the ink intensely enlightening and the pics, well, perfectly poignant.

I would like to offer a recommendation, but I don't want to spoil teatime in the process. I was reading Jason's article on the Euro Sport 1.8T Underdrive Pulley and noticed the dyno chart (p. 35, fig. 5) was mislabeled. I think Jason meant to put engine speed in rpm as the X axis, not mph. Also, the notion of linear power seems a gross assumption not supported by the chart. Doesn't a system with a rotating pulley (the power steering pump, AC compressor, or water pump) require more horsepower to rotate as the rpm increases? This would be recognized by the difference before and after. The pulley seems to have a negligible impact at the lower engine speeds, and a more significant one at higher engine speeds. My recommendation: Tell Jason to discontinue harassing the intern and spend more time polishing his articles instead of the car.
Andre Soto
Akron, OH

A: I'm glad you thought you got me. And under the assump-tion you made (that I mislabeled the chart) you would be somewhat correct. The real problem, though, is your assumption that the chart was wrong, because it wasn't. The mph reading wasn't a misprint; we had a problem getting the dyno software to display the rpm selected for that axis, so we used mph. This was the same reason we didn't have torque numbers for you. The car was at about 45 mph in third gear when the power separation between the two runs started. With the gear ratios as they are on VWs, that puts you at about 2,000 rpm. Sounds like linear power to me.

Led Astray
Q: Do you know any manufacturer that carries or is developing LED taillights for the Mk4 Jetta? These lights are beautiful but they seem to only be available for the Mk4 Golf. I currently have Hella smoked tails, but I would definitely upgrade if I knew LEDs were available. FK has them for the Golf, so why not the Jetta?
Alec Grant
Newport, VA

A: The problem you're going to have with the Mk4 Jetta is the same one Mk3 Jetta owners had to deal with - a lack of parts. The reason behind this is simple; Jettas are popular only in the USA. The rest of the world isn't fond of them. In fact, some countries don't even get them. Since most of the lighting products are brought in from Germany (Hella, FK, in.pro, and so on) they are only going to be made for what's popular in that market, and it isn't the Jetta. Sorry.

Young Gun
Q: I may be your youngest subscriber, but I have a question about Project EuroTrash. A '91 Jetta has very little power - somewhere around 70 hp, I think. So what mods will you do to the engine to make it faster?
Sam, age 13
via e-mail

A: Shouldn't you be playing with GI Joes or riding your bike? Cars are toys for us older boys... In any case, there are a few things you can do with a 1.8 8v to increase the performance, but we aren't going that route. Our plan is to swap it for a 2.0 8v crossflow motor, which has a better head. This and the 195mm rods make it smoother running with increased airflow potential. Not to mention the Motronic engine management is miles better than what the Digifant units had. After we swap out the electronics and motor, we're going to bolt on a turbo system. If that doesn't make us happy, we may get into custom modifications to the turbo and head to squeeze more performance out of them. This will all coincide with the diet we're putting the car on to drop as much weight as possible. The goal is to hit a 10:1 power-to-weight ratio. Wish us luck; we have our work cut out for us since EuroTrash puts out 73 whp and 92 lb-ft of torque.