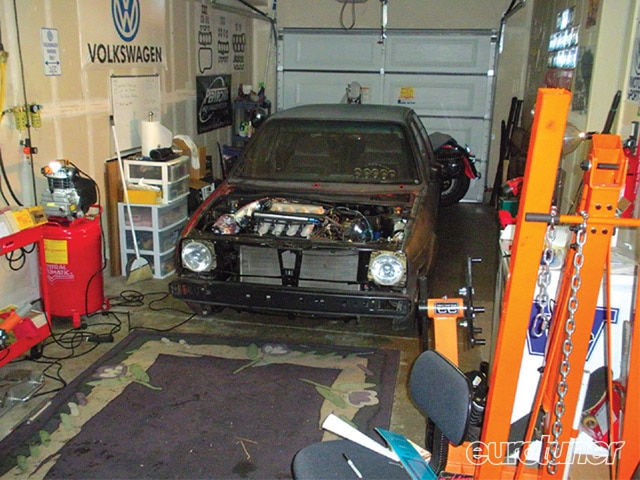 Dow 16v GTI
Three years ago, Robert Dow could barely drive three blocks without coating the road in coolant with his '92 VW GTI. It was battered, had a cracked heater core and blown hoses, but had potential in Robert's eye.

Enrolled in automotive classes at the time, he began restoring his GTI as a school assignment, which was also his first intensive project.

Robert started with the wheel bearings, shift bushings and instrument cluster. Then the engine took a dump after a windage plate broke, frying the head gasket and motor. Near the same time, Robert's other car, a Mk3 Jetta VR6, was stolen, so his Mk2 was all that was left standing. He used the insurance money to rebuild the 1.8L motor to driveable status. 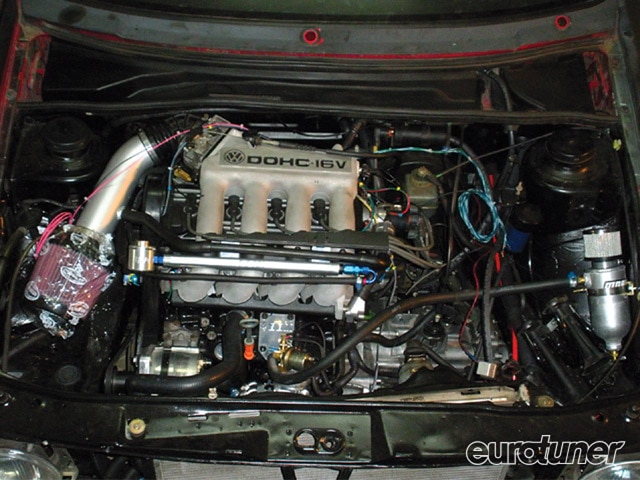 After a year of commuting in his Mk2, Robert craved more power. He sourced a used block from a '95 Golf and located a head from an '87 ABA 16v. The intake manifold was match-ported and the internals received ABF 10.5:1 pistons, Total Seal piston rings and ARP bolts. Robert also upgraded the 2.0 16v with Techtonics cams, adjustable cam gear, valve springs and exhaust, plus an ABD intake, 16v throttle body and crank gear.

"It took about a year to get all the parts put together. It's still not done though, as I'm routing the plumbing and building brackets for an oil cooler and catch can," he explained. The car needs to be tuned but Robert's guessing it should around 200whp.

What's impressive about this build is Robert started it as an automotive student and he has since labored in his tiny garage in Mukilteo, WA. Like most of us, he's not a millionaire, so most parts were bought from wrecking yards.

As an interesting tidbit, if you play Forza 2 on the Xbox, Robert's car was recorded for Microsoft's video game. Before Robert started his motor swap, his original 1.8L with a few bolt-ons was taken to a dyno and the sound was used for five different cars in the game! 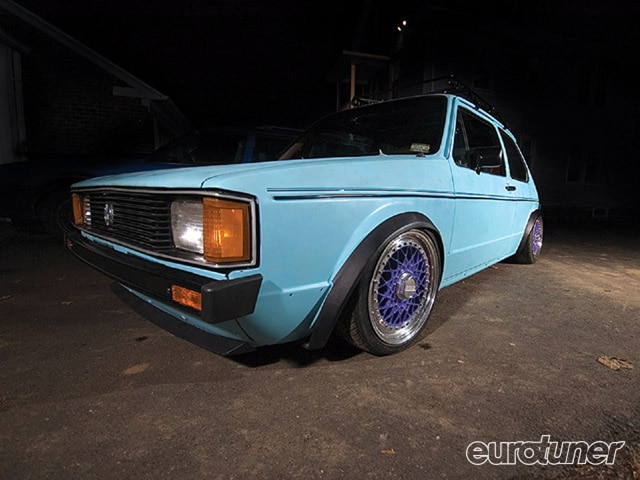 Easter Bunny
Jamie Otfinoski from Connecticut knew what he wanted when he started looking for a Mk1. He wasn't going to build a fully-restored show car, but wanted something unique, driveable and border-line unacceptable to the Mk1 community. And for him, that was dropping a Mk1 on the pavement!

"It's hard to find a Mk1 shell that's not all rusted out or has the floor completely rotten in New England," Jamie explained. "I found this on Craig's List for $400, but it had a smashed front-end and fenders. The body wasn't perfect at all." 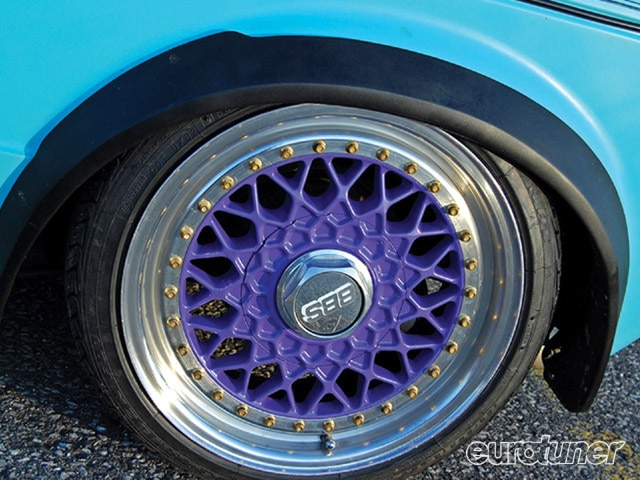 Then "mission slammed" came into operation and Jamie went balls-out, notching the subframe, raising the control arms and cutting the rear fenders. He then pieced together a custom air-ride kit from Air Assisted Customs, using Vmaxx universal front air bags and Chapman rear bags. "We had to weld the stock bushings to get it down to the height it's at now."

Some new rims were recently mounted, which were also discovered on Craig's List. The 15x7" BBS RS were battered but Jamie polished and re-drilled the lips, painted the centers and bought custom adapters to fit the 4x108 bolt pattern. Finally, 165/45-15 Federal tires stretched around the purple goodness.

From the photos, this Rabbit looks low enough, but Jamie isn't finished. He contacted Bagyard Air Ride in Austria. The company is making a custom kit to lower it at least one more inch. And Jamie is raising the strut towers to give it more lowering ability. He even plans to fabricate a new bracket to lower the frame further still!

Turbo Tom
There hasn't been much progress on Tom Thongprasert's '04 VW GTI VR6, but the timing issues have been resolved and the R32 cylinder head is finally bolted down using custom head studs. But Tom did send us better photos of the engine and Precision T61 dual ball-bearing turbo.

If you're just joining us, Tom's on a mission to surpass 500whp in his GTI with the help of Schimmel Performance, C2 Motorsports and Dubsquared. Not just trying to build an all-out track car, the team of tuners is working to keep the car daily-driveable. The 24v six cylinder currently features JE pistons bored to 82.5mm along with SP Forged 4340 rods and larger ARP bolts. As mentioned earlier, the cylinder head comes from an R32, which will help airflow and take advantage of the 2.8 liter's thicker cylinder walls. Tom says he's on track to have the motor finalized in the next two months, so we'll keep you informed.

TDI Hart
About a year ago (et 2/08), we had the pleasure of showcasing Frank Hart's '92 Corrado SLC. Instead of a VR6, he transplanted a torquey and fuel-efficient TDI into it. The Corrado was a one-of-a-kind creation, but Frank recently parted ways with it in order to provide for the adoption of a new baby. It meant the two-door coupe wouldn't worked as a family car, so he needed something more appropriate.

Meet the new grocery-getting, baby-seat carrying, family sedan - a '99 Passat 20v. It was a steal at only $600, but it had some issues such as oil starvation problems. "My plan is to go through all the routine maintenance: engine, brakes, suspension, wheels and tires. It's not an all-out project car but I expect to spend roughly $3000 and sort the whole thing out in time for the baby."

Already in the works is a new AEB large-port 20v crate-motor, which will save time going through the old piston rings, bearings, bolts and more.

And to cure Frank's diesel addiction, he's started another TDI swap for a close friend's '98 Golf. It already had a VR6 swap but it was nothing but problems, so Frank found a TDI motor from a '98 Jetta. The goal is to swap the motor and legally smog it as well. Then Frank will tear into the engine, upgrading the intake manifold, turbo, downpipe, injectors and software. We'll have updates on both of Frank's projects next month.

Porsche 350
While 17-year old Anthony Begins is studying for his SATs and finishing high school, he's also working on a Frankenstein project; this '84 Porsche 944. Since acquiring the car, the student tried to return it to stock but the wiring harness was fried, injectors faulty and clutch burnt. The engine also had very high mileage, so Anthony and his dad brainstormed options. "We decided it would be best to turn it into a street-legal drag car," he explained.

So Anthony sourced a Chevy 350 small-block with GM transmission and rear-end to build to the Porsche chassis. "I know it isn't exactly Euro, but the car will be good ol' American-fast when I'm done with it!"

The father and son team have already fabricated a custom four-link rear suspension with subframe connectors and trackbar locater. Custom motor mounts were built to secure the 5.7 liter small-block V8 engine, plus headers and Edelbrock carburetors were installed.

We'll bring you the updates on the interior and exterior changes, plus dyno and quarter-mile results once Anthony gets the car down the strip.

Read more about this 1992 Volkswagen Golf GTI at www.eurotuner.com, the official website of EuroTuner Magazine.