Some exciting projects under construction 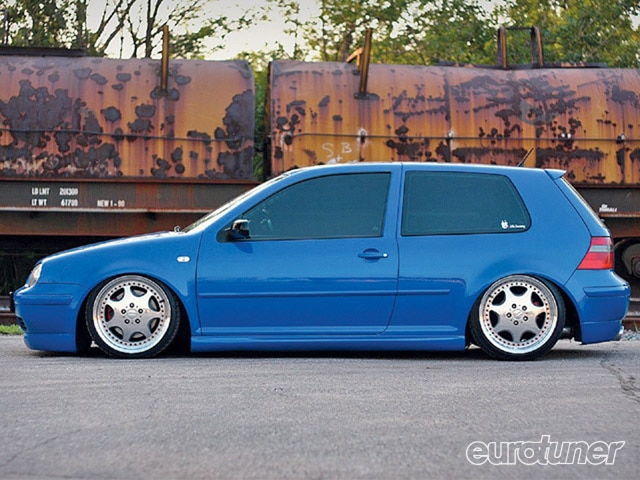 Nichol Bagged
Bagged 'n blue, John Nichol is here to set the record straight for the Mk4 VW community. Seen here is his Jazz blue 20AE GTI from last year. It has air-ride consiting of Bagyard front struts and an AAC rear, 18" Zauber wheels and molded bumpers. With an impressive exterior, more work is underway as he prepares the car for the '09 season.

"So far it's halfway through the rebuild stage," John told us. "The engine bay is scheduled for a matte finish on the Audi Aviator grey. After the base color is laid, I plan to go over the bay with airbrush, giving details to the bay resembling a fighter jet - darkened plug welds to resemble rivets, stenciled block lettering for various items, etc." 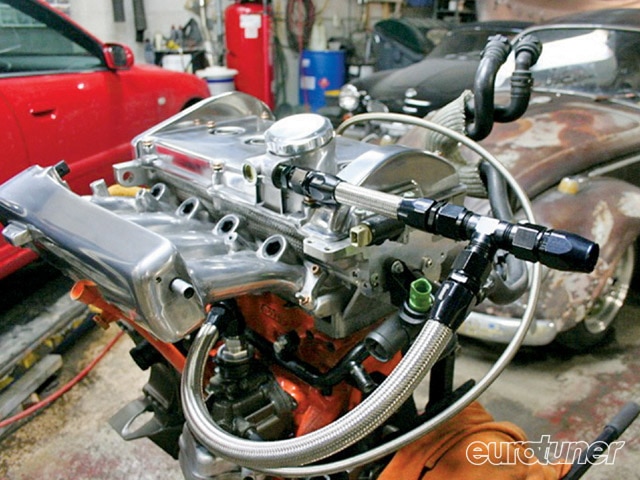 Once the bay is cleaned and painted, the new motor goes in, which John spent weeks building. A larger 034Motorsport intake manifold was polished along with the valve cover. Because the manifold is ported, John had to port the head by hand so they mated.

Not just about looks, the 1.8T was strengthened by Integrated Engineering rods and upgraded with a Garrett GT28RS turbo, larger fuel pump and injectors, new exhaust manifold and downpipe. Water/methanol injection will also see its way into the motor.

Non-motor updates are just as intensive, with the interior under molestation. An Auto Power six-point rollcage has been powdercoated orange to match the engine bay. Sparco seats and steering wheel give the Mk4 a motorsport look. There's also more bodywork and brake upgrades on the agenda, but we'll wait until next month to see the rest. 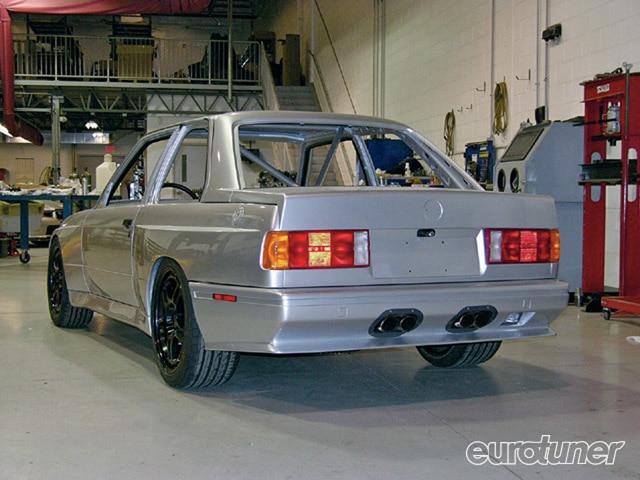 Piper E30 V10
Frankenstein's eyes have opened... If you don't remember this Garage Project, Piper Motorsports of Sterling, VA took a bare BMW E30 M3 shell and transplanted a 5.0 liter V10 motor from the E60 M5. Already rated over 500hp from the factory, Piper massaged the engine to obtain more muscle with a custom exhaust and other goodies. Fitting the M5 engine and drivetrain wasn't en easy job - an E90 subrame was modified to donate its shock towers and firewall. 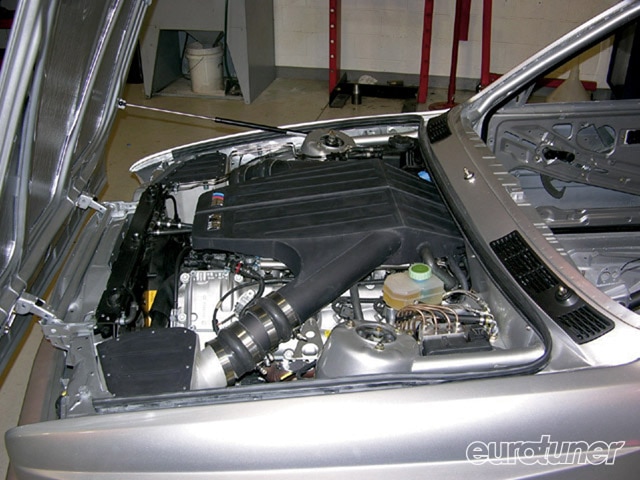 Of course, putting the power to the ground would entail more than just a tranny swap, so Piper modified the body with a custom widebody conversion to maximize the vehicle's grip. Weight was also adjusted to maximize performance as it was dialed down at 2514 lb and an almost 50/50 distribution.

"The car is now mechanically sound and in terrific driving condition," explained Robbie Clements of Piper. "It will be shipped to AI Designs in New York for the interior installation. It will then make one more trip to the bodyshop to have the panels realigned and the paint buffed 'n polished."

Perhaps when you check back next month, this Frankenstein E30 will finally be awake! 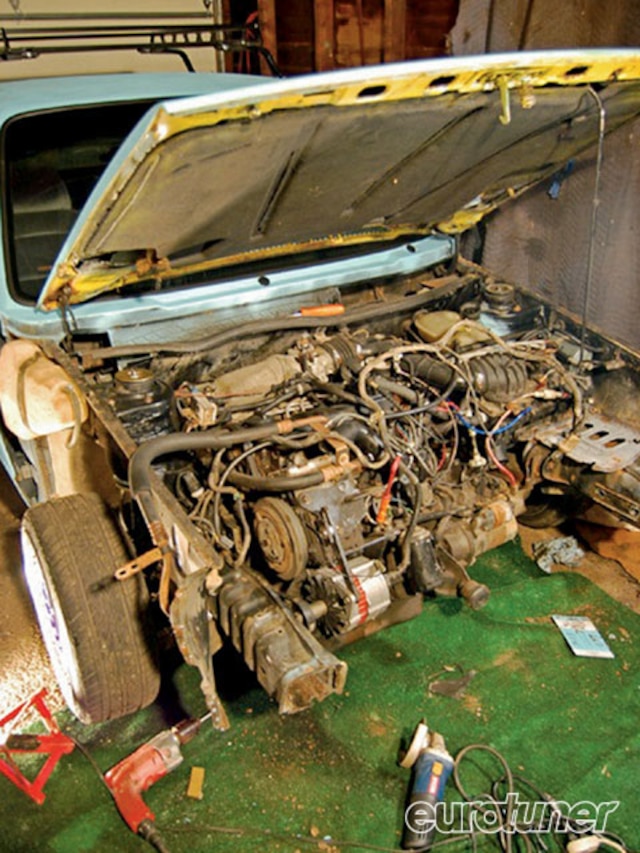 Easter Bunny
In et 4/09, Jamie Otfinoski's '84 Rabbit GTI created sparks as he fabricated drag blocks under the rear beam of his super-slammed Mk1. The baby blue Bunny has come a long way from a bone-stock find on Craigslist, but Jamie is happy to report updates for the show season.

Swapping out the Vmaxx front and Chapman rear airbag system, Jamie finally received his Bagyard kit from Austria. "The ride is much smoother and they go significantly higher than the coilover bags. The quality is amazing on these things!" he said with a smile. 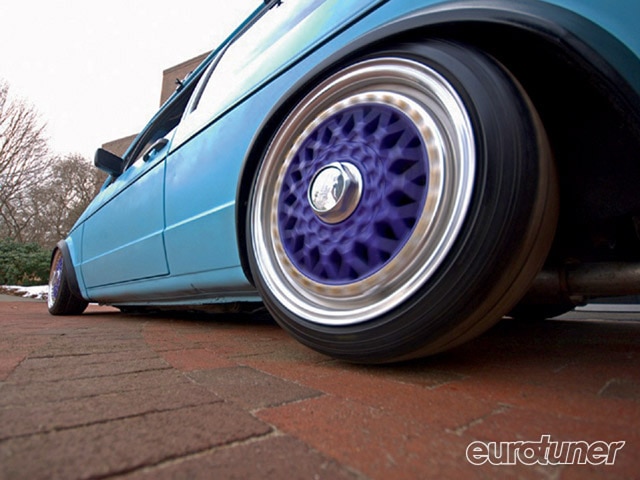 While installing the new air-ride, Jamie hid all the valves and grounds; then made a false floor out of Astroturf for the trunk, so only the tank and compressor were visible.

The interior is almost finished on the Bunny. Recaro seats were installed, along with a black dash and wooden Momo steering wheel from Japan. To everybody's surprise, instead of a regular shift knob, Jamie now changes gears with a full size bowling pin!

To clean the body, Jamie shaved all the holes in the fenders, rocker trim and antenna. The Rabbit will be in the paint booth in the coming weeks, so we'll have another update next month.

Stehly Racer
Young SCCA racer, Aaron Stehly is kicking things up a notch. After winning the IT Triple Crown Championship for the ITB Car National class in his '94 VW GTI 2.0, Aaron picked up a '06 GTI 2.0T last winter. Having driven in SCCA for eight years, he enjoys racing in restricted classes where skill is more important than power. The Minnesota native is building his next racecar for SCCA's Touring 3 class.

Aaron's Mk5 GTI is allowed minimal mods. He's working with APR Motorsport and the local dealership Westside VW to bring the car to race-spec without jumping outside the boundaries of class restrictions. What he's allowed to do is tune the ECU, run DOT-approved racing slicks, install a cat-back exhaust, stainless brake lines and different pads, limited-slip diff, plus strip the interior. Suspension tuning is also limited and he can't adjust the height of the car. The strut and sway bar package are awaiting approval from SCCA, which have been developed by APR Motorsport and Koni.

Seen here is the extensive rollcage constructed by D&E Specialty Cars. It uses over 110ft of 1.75" DOM tubing and is similar to the Koni Challenge racecars campaigned by APR. Once the car is complete, the decals will go on and he'll be ready for the first race in May at Blackhawk Farms, IL.

Briere Rado
We've been following Allen Briere's Corrado build for over a year but hadn't heard from him recently. However, he decided to promote his new company, 53 Motorsports, by trying to get into the mid-13s with a naturally-aspirated high-compression 8v engine.

He plans to use a 2.0 16v 9A block, pistons, crank and rods matched with a 2.0 ABA Crossflow head. To lower the compression he's installing a C2 ABA head spacer, while the head will be ported and polished and get a Techtonics 288? cam. It will use Digi 1 tuned in-house but may get individual throttle bodies or just an SRI. There will also be a Bosal header and a side-exit exhaust.

As for the chassis, he's removed plenty of weight and is making fiberglass fenders while hunting for a cheap CF hood. Most of the wiring has been removed, except for the tail lights and ECU. The fuse box remains but was relocated 3" higher. The ABS, PAS and A/C was deleted and the brakes will be down-sized to 9.4" from a Rabbit. The hatch was been stripped and plexiglass will be used throughout. However, the rear spoiler remains, although it too has been lightened.

Once the Koni coilovers are installed, Allen hopes to have fun drag racing his ever-evolving project car and is sure it'll be fast enough.