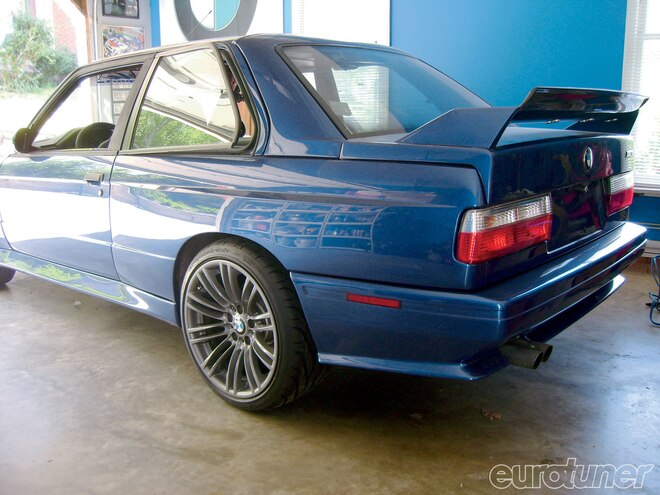 Contact: to be included on this page, email details of your vehicle to:
eurotuner@sorc.com

Castillo E30
Richard Castillo has been involved in the Euro scene for about 18 years. As a parts adviser at Hendrick BMW in Chralotte, NC, he finally saved enough to start an E30 M3 project.

Married with kids, he's been building the car in his spare time at home for about two years. The body received Evo fenders and a rear spoiler with carbon lip. The front Evo valance was molded to a carbon bumper. The reflectors were shaved and the bumper modified to house a front-mount intercooler. Once the exterior was cleaned up, Richard had the red body sprayed E90 BMW Montego blue metallic. As for performance, the original 2.3 S14 motor's been rebuilt along with the differential, and Richard plans to turbocharge the four-cylinder soon.

Avdic Mk1
Bowling Green, KY resident Fikret Avdic started a new project last year and it's now coming together. His '83 VW Rabbit GTI features a custom steel widebody stretched 3'' each side. Other additions include a badgeless grille and Euro lights. For the motor, Fikret sourced a 2.0 16v from a '92 Jetta. Fitted with Autotech cams, Techtonics software and exhaust, it should give the Rabbit more pep. Fikret is also swapping in a new Eurospec tranny with Peloquin LSD for traction. As for suspension, Koni adjustable dampers will be matched to Neuspeed springs.

Phantom Caddy
After a big debut at last year's Waterfest with its immaculate '91 VW GTI VR6 (et 10/09), Phantom Autowerke from New York is back with this insane '81 Caddy project. Started in December, major progress has taken place from the box fender flares to stripping out the interior and old motor. Phantom plans to update with a plethora of Mk4 parts for the interior, floor, drivetrain and motor. Expect this Caddy to sport a big-turbo 1.8T and six-speed manual. Best of all, Phantom claims the Caddy will weigh less than 2000 lb.

GMP Rabbit
In the '70s and '80s, GMP Performance autocrossed this Mk1 Rabbit and raced in SCCA events. Since then, it's collected dust in their North Carolina warehouse. But now they've decided to bring the car out of hibernation and give it a much needed restoration.

Set to debut at their Thawout Open House this month (see calendar), the Mk1 will be kept mostly original with some minor additions. Updates include a strengthened body and chassis, fresh paint, rebuilt carb'd engine, restored wheels and new decals. Still weighing a lightweight 1500 lb, the car should still rip around the track.