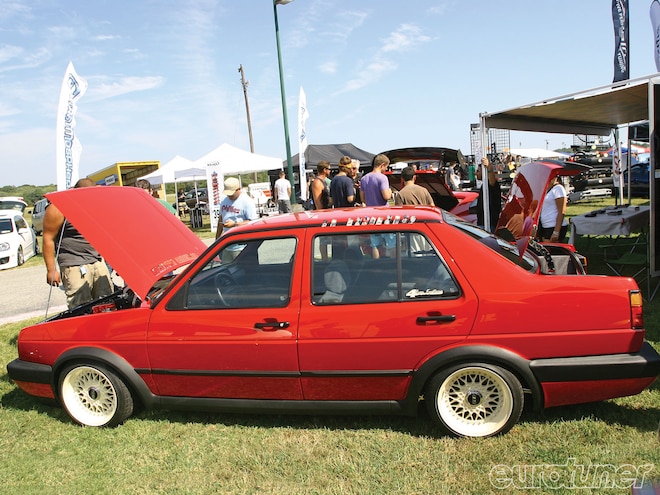 Baker Returns
More than two years ago, we brought you the first look at Derek Baker's '91 Jetta (et 1/08). With a turbocharged VR6, classic Borbet wheels and OEM+ styling, it was a timeless Mk2. Fast forward to '09 and Derek revamped the entire car by shaving the bay, polishing and chroming a 2.9 liter VR6, added individual throttle bodies and fitted an 02A tranny. The car deservedly won Top Dawg at H2O International two years in a row, but now Derek is taking it apart again with new ambitions. "I'm basically turning it back into a semi-show, semi-daily driver. I missed a year of driving the car and now it's time to get back into it. My vision is an extremely clean and OEM-styled car," explained Derek.

Since H2Oi, Derek pulled the motor and sold the ITB setup. The bay will lose its beige for a red color-match. The stand-alone engine management is also being tossed for a lengthened OBD2 harness for easier drivability. And speaking of the motor, it's been rebuilt because Derek had persistent problems with it. More visual changes will include a powdercoated intake manifold in Harley Davidson Warlock grey.

Finally, the exterior will see updates including the mirrors and rebuilt wheels with grey centers and chrome lips.

"My goal is to have the car done by February so I can bring my new baby boy home from the hospital," he smiled. "I want his first ride to be in this car!"

Fox Racer
Two months ago, we introduced you to Joseph Machado's '88 Fox Wagon. It's his first VW project car and he's been rejuvenating it in an OEM+ style.

The Florida resident shaved the side lights and antenna, adding Mk3 handles, smoked tail lights and then repainted the car black. A set of custom coilovers along with 16" TSW wheels finished the chassis.

Since our last update, the Fox now runs with a 2.slow turbo setup. The ABA 8v received new internals with Ross Racing pistons lowering the compression to 8:1. A forged crank and rods were also installed.

A Kinetic manifold allows a Garrett GT35R turbo to mate to the block. Compensating for the extra airflow is a Walbro fuel pump and uprated injectors. Joseph is happy to report the car made 460hp at his local dyno.

Hoke Pokey
In et 4/09, Jordan Hoke surprised us with a handsome '98 VW Passat 1.8T. Repainted Audi TT Aviator grey with BBS RS and clean Euro styling, it was one of the most unique B5s we've come across.

Since then, he's made adjustments to the sedan, giving it more show appeal. The RS wheels were ditched for body-matched 18" Abt wheels. A rare Abt grille was installed as well. Inside, Recaro A8 seats look heavenly, while the headliner and pillars were reupholstered in black along with a 20AE sunroof console and window visors.

For the '11 season, Jordan plans to go big with new paint, wheels and a right-hand drive conversion. He's already sourced new Carline CM6 billet wheels along with parts from the UK for the right-hand drive swap.

As for the paint, he's aiming to respray the car in BMW Individual Atlantis blue, as seen on our 10/10 cover car. Jordan is even thinking of more power with a motor swap, although a blueprint for the 1.8T is still in the works. 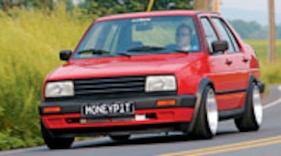 Check out Derek Baker's '91 Jetta it's no half-baked project; it's a 290WHP VR6 turbo! - Eurotuner Magazine