Helping Fix What You Broke 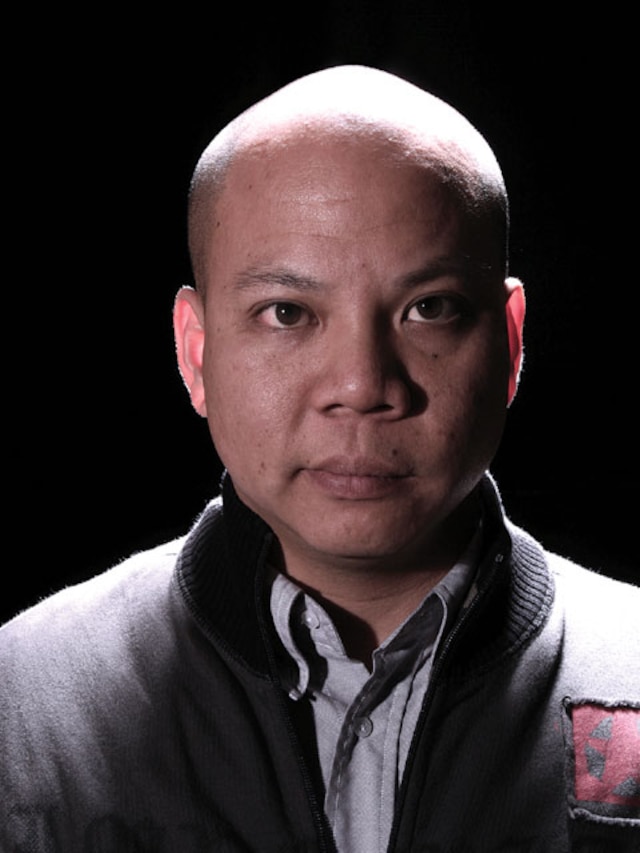 Toyota's N'at
I'm a first-year automotive apprentice, so my knowledge is limited. I recently bought an '88 Toyota Celica GTS, that I plan to practice rebuilds with; removing the head and crank, replacing bearings and valve seals and so on...I have been told the car's 3SGE engine is as strong as its turbocharged brother, the 3SGTE, and I was wondering if it wouldn't be a complete waste of time for me to look into adding forced induction to it after the fresh, factory-spec rebuild is complete. As a student, money is limited-so no aftermarket big power builds for this one. Just wondering what the limits of the 3SGE are, and if it can be made to handle boost. Or, if I should/can build it to 3SGTE specs instead. Looking for some insight.
-Bryce, via e-mail

Up until 1995, Toyota made even their non-turbo engines fit for a Sherman tank. Your 3S falls into this category, but the compression isn't low enough for big boost with pump gas. The low-buck way to lower your compression is to get yourself an HKS or A'PEXi 3mm head gasket for the 3SGTE-it will effectively lower your compression about 1.2 points. As I recall, the 3SGTE exhaust flange on the head is the same as the 3SGE, so search the junkyards (eBay) for a used OEM Celica All-Trac turbo and exhaust manifold assembly to get started. I love old cars because they're so damn easy to make power with.

Bloodthirsty Noob
I'm new to the tuner scene and recently purchased a '94 Civic Si. I was stoked on buying the car at such a low price ($3,000), but upon driving it to school for the first time, my friends promptly informed me that it couldn't stand up to the performance of their cars-Eclipse GTs, Integras, GTIs, and a 300ZX TT. Is my car really that bad? Please give me some good news; tell me that I can make these punk "friends" of mine eat their words (and my dust) in a few easy steps. I figure the 300ZX is the fastest car out of the group; how do I have to mod my EG to take that thing out?
--Gabriel Kent, via e-mail

The '94 Civic Si with the D16 engine isn't that bad, especially after adding forced induction, but the weak point in the stock engine is the connecting rods. If I remember correctly (it's been a while....), the D-series engine starts breaking connecting rods at about 240 whp, at best. Bolt-on turbo kits from companies like Edelbrock or Full Race aren't usually advertised for high power gains, but with some pistons, rods, and good tuning, you can end up with an easy 300+ whp by bolting one on. That should be plenty to piss off your buddies with the Eclipses and GTIs (...especially the GTIs). Your Civic is the lightest car out of the bunch, so even 240 whp would smoke most of those guys, except the 300ZX. Think of that car as your older brother; he's bigger than you are, and just like in real life, you might not want to f*ck with him.

Diamond Star Drift_R
A friend and I were watching some Options videos the other day, when I noticed a few EVOs, STIs, and GT-Rs drifting against the usual Silvias, Corollas, and RX-7s. I always thought converting all-wheel drive to rear-wheel drive was a complicated, custom process, but apparently these guys are doing it all the time. Generally, what is involved with the conversion in most cases? Would I be able to do it to my first-generation Eclipse? What would I need?
--Anonymous, via e-mail

Converting an all-wheel-drive car to a rear-wheel-drive generally involves installing a solid center differential and removing the front axles. After doing this your car will effectively be rear-wheel drive. The problem is since you are now putting 100 percent of the engine's power to a drivetrain that was only designed to handle 50 percent of the power at most, you end with a lot of broken parts; this can be solved by installing stronger driveline components, but it's generally an expensive learning process. Unless you have plenty of time and big bucks, I don't recommend it. If you already got big bucks invested in that Eclipse, then go for it, but if not just buy a proper rear-wheel-drive car in addition to your current all-wheel-drive car and have twice the fun.

To K Or Not To K
I'm thinking of swapping my '93 Prelude with a K20 or K24. Is this possible and is it a good idea, or should I just keep my JDM H22 VTEC and put more money in to that?
--Steven, Highland, Calif.

The H22 is a perfectly good engine. While the K20/24 is capable of making more power and torque (you can't mess with technology and evolution sometimes...), the H22 can still make a ton of power. All the hassle and money the swap would require is not worth it in my book. You will be much happier putting your time and money into the H22 in the end. Trust me.

Sergeant Smoke 'Em
My name is Alex; I'm an Army Sergeant stationed overseas. I have about three more months until I return home, and have been wondering what the best swap to do in my '97 Civic would be. Engine included, I'd like to spend only $5,000 altogether, doing most of the work myself. I don't want to have the fastest car on the street, but I do want to be able to smoke a stock EVO. Thanks; I look forward to your response,
--SGT Alexis Montanez, location unknown, Iraq

Now, here's a good place for a K swap. I would go with a K20 or K24 with the Type S head, a Hondata ECU, good header, good intake, and a good mount kit (stay away from no named eBay crap). In a '97 Civic with good tires and suspension, you'll be smoking stock EVOs without breaking a sweat-at least from a roll. All-wheel drive is a powerful thing when it comes to launching. 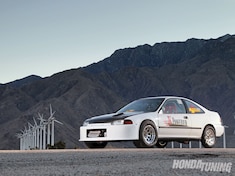 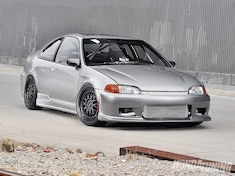 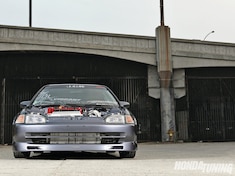 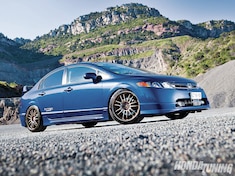 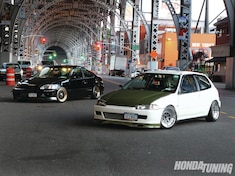