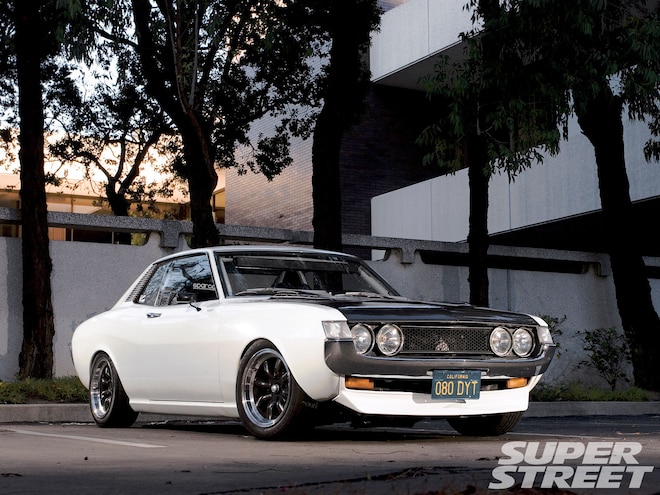 Here's where we act like we know something technical about cars. Feel free to ask us about your technical troubles. Write us at tech@superstreetonline.com or Super Street c/o Tech Support, 831 S. Douglas St. El Segundo, CA 90245. Feel free to include a picture of your project or tech problem. All photos submitted become ours, ours, ours... so don't send us something that doesn't belong to you in the first place. 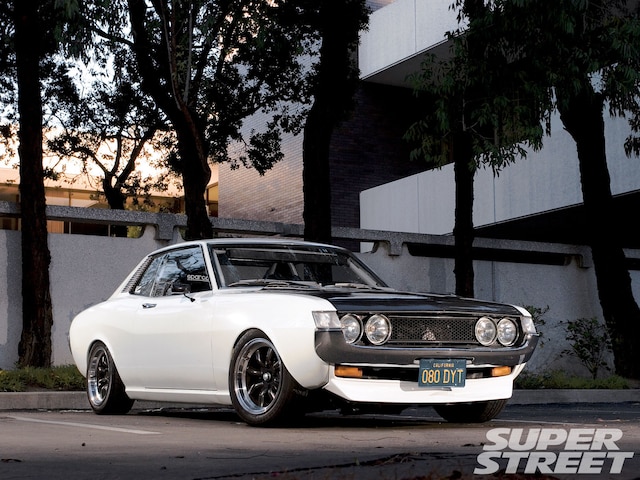 Q: Hey guys how's it hangin'? I just got my first car, a 1976 Toyota Celica GT! It's pretty beat up but I have big dreams for it. I had a question for you guys: what motor should I pop in there? I've seen a lot of the old school Datsuns with their big brother Nissan engines in 'em so I was wondering what kind of engine I could put in my GT? Would a 2JZ even fit in there? But then again I'm only 16 so I don't exactly have all the money. What's the more affordable engine that I could put in there? Any help on my engine, body mods or interior would be greatly appreciated.
Gabe Bedolla

A: What an awesome first car! The 2JZ would fit, where there's a will, there's a way - but it's not going to be simple or cheap. The motor we would recommend for your car would be the 18RG, which was only sold in Japan. Although it's an older motor they aren't exactly cheap or easy to track down, they usually sell for around $1000 for a longblock.

Q: What's the difference between a B-Series Type-R (B18C) engine and a K-Series Type-R (K20A)? I'm doing an engine swap in a '98 Acura Integra (DC4) and looking for an "Official" Type-R engine. Also which engine would you recommend?
Jeramie Haynes

A: A lot. If you want to get technical and count every last bolt there are thousands of differences between the motors. If you're talking horsepower, it's a difference of roughly 20hp in favor of the K-Series. Both are "official" Type-R motors; they just came in different chassis. The B18C was originally installed in DC2 and DB8 Integra Type-Rs while the K20A Type-R has more variations and came in the EP3 and FD2 Civic Type-Rs and DC5 Integra Type-R.

Q: First off I would like to say I am in love with all of you sexy mofos. I have been a subscriber for about a year and I grit my teeth every month waiting for my next issue. But other than me fantasizing about you, I need advice with a swap. I drive a 1990 Nissan 240SX hatchback. I really want to do a swap but I don't know what engine. I really wanted to swap the all-popular SR20 but I want my 240 to be different from everybody else. I was considering a 1JZ/2JZ; I have also thought about a RB or the CA18. But I am also a college student on a pretty small budget. I don't want to have to do too much modification to the engine bay if possible. So if you could tell me what my best choice would be for the most horsepower and easiest to swap with a lot of choices for parts, and of course, keeping in mind my pathetic budget, that would be great. Thanks so much for the advice.
Vern Churgeson

A: Sometimes being different isn't necessarily good. The SR20 is a popular swap for the exact reasons you're asking for - it's a relatively inexpensive and simple swap, and there is a vast amount of aftermarket support. On top of that, the SR20 is capable of making plenty of power. If you do decide to do something else and want bang-for-the-buck we'd recommend looking into a Chevy LS engine swap. As much as some people hate the idea of an American motor in a Japanese car, the performance gain for the money is undeniable. Another option that is fairly popular is going KA-T and adding a turbo to your existing motor. The choices can seem overbearing but those are our suggestions for a low budget setup.

Q: Please help. I have a '08 Mugen with a couple mods, an AEM cold-air intake and Megan header. But last week I blew a hole in the block. Didn't think that was gonna happen any time soon. The car's obviously only a year old, but the first Honda dealer I took it to said, "Nope, the intake voids warranty." So I took it off and put my stock one on but need a cool dealer to take it to. Curious if you already had an article on a Mugen yet or something that will help out their decision on hooking up the car? Thanks a bunch.
Vincent Duran

A: If you were able to find a way to punch a hole in the block of a brand-new NA motor, you should probably fix it yourself. If you do decide to repair the car and continue to modify it, you can look to our past issues - we've featured plenty of FD2 Civics (including the Mugen RR Advanced) that you can draw inspiration from.

Q: I just want to start off by saying that I love your mag. I have been a fan since '02 and I haven't found another mag like yours. I have a 1993 Acura Integra LS, the problem is that my crank is totaled. I have done almost a full rebuild with a new head, pistons, piston rings, rods and rod bearings. I was thinking of cutting my crank but I went to the machine shop and the guy said I have to cut to 1.00mm, which I think is too much. I'm wondering if you can 7help with my problem if I should cut it or just get a new one? Also where can I find a new one? I am on a budget. Thanks for all your help; the mag is the best.
Gustavo Romero

A: In retrospect, at this point, it probably would have been cheaper to just go to the junkyard and pull another running motor to swap into the car. But since you've already invested time and money into the motor you have, you might as well finish it. We'd recommend either picking up a used crank from a junkyard or try to find a motor with a blown headgasket that you can pick up for cheap (LS should be less than $100 for a longblock that isn't running). If you have to buy new, the only option would be buying from the dealer, but the cost is going to be high.

Q: How hard is it to do a trans swap (auto to manual) on an '08 Impreza?
Jesse Kapsten