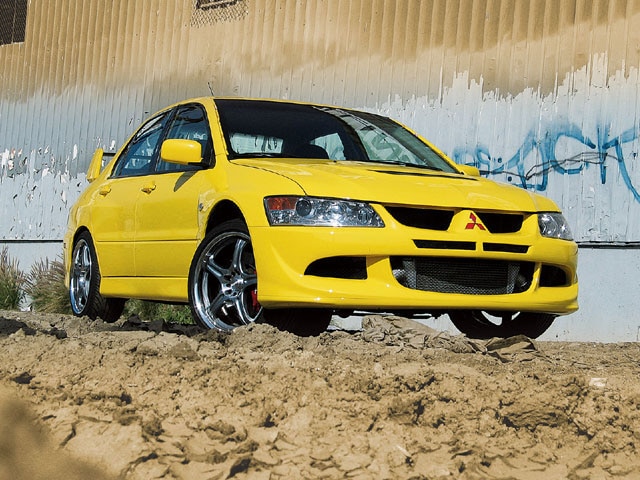 I don't claim to be philosophical or even possess enough knowledge to have an educated conversation regarding Darwin's theories. But I do know Darwin's theory of evolution is highly regarded in the scientific community stating that all things descend from a common ancestor. From the birds to the bees and from fish to human beings, we are all have. Over generations, says Darwin, single-cell amoeba can change genetically to aide in its survival. Over millions of years that amoeba would eventually develop into a more complex creature, a fish or a spider, for example.

This leads to Darwin's theory of natural selection, which in layman's terms is how, over time, a species adapts and develops functional advantages over other members of the species, i.e. larger fins on a fish to escape from predators or eyesight more keen to better detect prey. Eventually the members of the species who do not have these advantages will be weeded out through "natural selection."

This leads us to the Mitsubishi Evolution VIII. The current generation Evolution came from humble beginnings back in October 1992 when the Evolution line of vehicles by Mitsubishi was first released. Mitsubishi might have adopted Darwin's theory of natural selection and developed the Evolution I by using and adapting engineering feats learned on the Galant VR-4, campaigned during the 1988-'90 World Rally Championship seasons.

The Evolution I was 20 percent stiffer in torsional rigidity than the Galant. This was made possible with additional reinforcements and welds but yet only weighed 2,575 pounds through the use of aluminum panels. The powerplant used was the already potent 4G63 engine pumping out 250 ps (247 horsepower). The car was a beast on the road. Over the next decade Evolution models grew in size (track and width) for better overall handling and in power (from 247 horsepower Evolution I to 276 horsepower Evolution VIII). The Evolution VIII is a true predator, always looking to evolve further making it better and faster.

Instead of waiting for Mitsubishi to come out with the Evolution IX we thought it would be cool to aide in the Evolution progression ourselves with some hop-up modifications to our Evo VIII. Our fly yellow Evolution came to us with barely 3,000 miles on the odometer. The car was as stock as they come with the exception of 18-inch gunmetal SSR D5R wheels wrapped in 255/35 Falken FK-451 rubber. On XS Engineering's 4WD DTS dyno the Evo laid down 248.0 horsepower.

Having tested Evolution VIIIs in the past we knew how finicky the ECU is and wanted to avoid any before-and-after testing problems we may face with performance parts we plan on installing. So our first modification was an AEM EMS plug-and-play computer. The EMS system completely replaces the factory ECU and allows the user/tuner to adjust fuel, ignition, start-up, boost maps, etc.

Another key component to the EMS the capability to data log each run, whether it is at the drag strip or the dyno facility. This allows the tuner to access all the engine vitals such as boost, 02 voltage, TPS voltage, MAP and other parameters. Being able to data log is crucial in maintaining optimum performance and to prevent damage from occurring to your engine.

Our first bolt-on was the GReddy Racing Ti exhaust system. The system is a beautiful piece with robotic tig welds and mandrel bent three-inch titanium piping. The stock exhaust system tipped the scales at 33.0 pounds while the GReddy Ti system weighed in at a feathery 13.5 pounds. Considering a weight loss of nearly 20 pounds the car should already be faster from the lighter weight. With the engine running, the new exhaust system emits a nice deep tone, but with the silencer installed the car is fairly muffled.

With the system installed, peak power was pushed to 264.4 horsepower. The free-flowing exhaust system really helped in the lower rpm ranges allowing the turbocharger to breathe easier enabling the turbo to spool faster.

With the turbocharger exhaling easier it was time to increase its inhalation. An AEM intake was put in charge of that. The five-inch cone filter helps promotes airflow into the turbocharger while a heat shield prevents the engine from breathing in hot air from the radiator fan. The intake is 50-state legal so the po-po's should leave you alone also. Extra flow means extra horsepower. Back on the dyno, peak power rose to 269.5 horsepower, a gain of 5.1 horses.

Our final modification for this installment was addition of a DC Sports competition downpipe. The reason it is a competition affair is because the downpipe deletes the factory catalytic converter. So unless you are a brave soul or live in a state where the cops don't care we don't recommend using the downpipe on the street.

The downpipe features CNC mandrel bends, CNC-machined flanges and is constructed from 100 percent stainless steel. I guess competition also means more horsepower as the downpipe pegged the dyno at 292.4 horsepower to the wheels, an increase of 22.9 horsepower over stock.

With four simple bolt-on mods we were able to generate 44.4 more horsepower to the wheels. And did we mention we are running less boost pressure than the factory ECU. Our next installment will definitely include larger injectors and a fuel pump since the factory 440cc injectors are running at 95 percent duty cycle. We are also looking to add an upgraded front-mount intercooler, DC Sports turbo manifold, AEM cam gears, upgraded turbo, larger camshafts and much more.

Stay tuned as we pump up this Evo to be at the top of the food chain.

We feel the AEM EMS plug-and-play system was the key element in our Evolution VIII generating the type of power it did with the three other bolt-ons. We have tested Evolutions in the past and found it hard to generate power using the stock computer due to the ECU backing off the timing or limiting the boost pressure. You might get one great run and the next the car feels slower than stock.

More importantly, the system is fully sequential and not batch fire, even with larger injectors the engine still idles like stock. The software is Windows-based making saving programs and tuning much easier.