Home  |  How To  |  Aftermarket Parts  |  Jackson Racing's Eighth-Gen Civic 1.8L Supercharger Kit - Runt Of The Litter No More
Subscribe to the Free

The non-Si Civic, powered by Honda's 1.8L R18 mill has long been the forgotten stepchild of the enthusiast market. While the Si's potent K20 has been blessed with a number of aftermarket options, if you happen to be an R18 Civic owner, you've probably already realized that aftermarket performance parts are about as rare as an honest politician. Most of the Honda performance companies that offer cams, headers, throttle bodies, etc., for the B-, D-, H-, and K-series families have simply skipped right over the R-series and left it for dead.

The guys at Jackson Racing have a knack for finding the good in what others view as not so good, and the unloved R18 is no different. They saw the R18 as a wonderful, fuel-efficient engine that, given the right calibrations and boost, could make its big brother Si pale in comparison. Additionally, the Civic R18 can be purchased with an Automatic transmission; something that the Civic Si cannot. Before you shake your head, keep in mind that in some urban settings, an automatic just makes sense.

If you look inside the cramped engine compartment of the R18 Civic, you probably don't see too many areas to fit a supercharger. Fortunately, the compact size of the Rotrex C30-74 supercharger is able to fit nicely under the hood and as you can see by the accompanying dyno numbers, achieves some amazing results. As is normal for the guys at Jackson Racing, they've designed several key features that set their standard of supercharger design well above everyone else in the industry. As an example of a simple, yet very important feature overlooked by most aftermarket companies, Jackson Racing managed to figure out how to put the Mass Air Flow sensor (MAF) in the path of the boosted air so that the ECU can actually measure the proper air flow. Even more important is the fact that the air temperature coming from the supercharger is also properly measured for a perfectly calibrated engine in all weather and driving conditions. Most aftermarket kits put the MAF on the inlet side of the supercharger or turbo because it's easy and inexpensive to build. The problem with that lies in the fact that boosted air exiting the supercharger is much hotter than the incoming air. If the ECU only sees the temperature of the incoming air, and doesn't get a proper air temperature reading, the engine calibrations can never be correct. This seemingly small feature is what was needed to pass the very stringent California Air Resources Board (C.A.R.B.) emissions standard; and yes, Jackson Racing's Civic R18 "Factory Tuned" and "Flashpro Tuner" systems with 7 psi are legal for use in California (C.A.R.B. EO #D-700-1). Most aftermarket companies leave you, the consumer; to do your own tuning and leave you with the responsibility to find a way to emissions test your car once it's been modified. That's not the standard at Jackson Racing.

As the name implies, Jackson is a racing company and thus they not only built and developed a C.A.R.B. legal supercharger system, but they also sell a version dubbed the Track Pack for those weekends when you plan on turning laps at your favorite race track. In the Track Pack version, Jackson Racing has packaged larger injectors and a precision calibration to go along with 10 psi of boost for trouble free track days.

So how does the Jackson Racing supercharged R18 stack up to its big brother, the 2.0L Si in terms of torque? Well, take a look:

When looking at peak horsepower numbers:

If you're anything like us, you're wondering if there's more. There is. The Track Pack version hits the Si even harder as the revs continue to grow. At 7,000 rpm, when the K20 is taking full advantage of its amazing iVTEC engine, the dyno shows 185 hp while the Track Pack equipped R18 is making 243 hp! Regardless of how much higher the Si can rev, you simply can't give up 58 hp at 7000 rpm and hope to be first at the finish line.

Jackson Racing's impeccable resume should account for any disbelief. Oscar Jackson Sr. has more experience with Honda engines, both inside and out, than any person I've ever met in my entire life, and that should be more than enough to make me a believer. The numbers listed in this article should be more than enough to have me singing the praises of the R18 supercharger kit. "Should" being the operative word here. However, I'm as stubborn as they come, and I took Oscar Sr. up on his offer to experience the Jackson Racing R18 kit for myself. The vehicle he had on hand was an 8th gen Civic coupe equipped with the factory automatic transmission. When he saw my expression in regards to the auto trans, he smiled and quipped, "Just try it, you'll see." I jumped inside the driver's seat with Jackson Sr. sitting shotgun, fired it up, and... *crickets churping*. With a completely stock exhaust and factory catalytic convertor, nothing out of the norm happened. I threw the slushbox into drive and made my way through the business park. On the street at cruising speed, I would never know that anything was touched under the hood of the coupe, as it felt completely stock. I stabbed the gas a bit more as I headed onto a main street, and immediately, the car came to life. Even with an auto trans, the car picked up incredibly quickly. Sr. pointed toward an onramp that went uphill and joined a somewhat populated stretch of freeway. At full throttle the R18 made quick work of the hill and as I made my way onto the almost always aggressive flow of SoCal traffic, I matched, and out accelerated the cars that had a running start as I merged into traffic. Massaging my way through a herd of smartphone zombies, I found an open stretch and got all the way into the throttle. Once again, the car instantly lurched forward without any hesitation and the deceptive whisper of the Rotrex unit forced me to glance at the speedometer. Well above the posted speed limit, and with Sr. giving me an elbow nudge that was as much "hey dude, take it easy" as it was "whaddya' think?!," I eased off and exited the freeway.

As an Si owner, I'll be the very first to tell you that I would never, ever, have the urge to experience an automatic R18 Civic. But I'll also be the first to tell you that the Jackson Racing R18 supercharger kit is for real, and it means business! The acceleration and torque outshine a stock, or even mildly modified Si. R18 owners have been waiting a long, long time for something real, something that would be worth their hard-earned money. Many have avoided modifications altogether, noting their lack of "bang for the buck," and instead kept their cars C.A.R.B. legal. The wait is over, they now have something street legal, extremely effective, and they're no longer the runts of the liter. 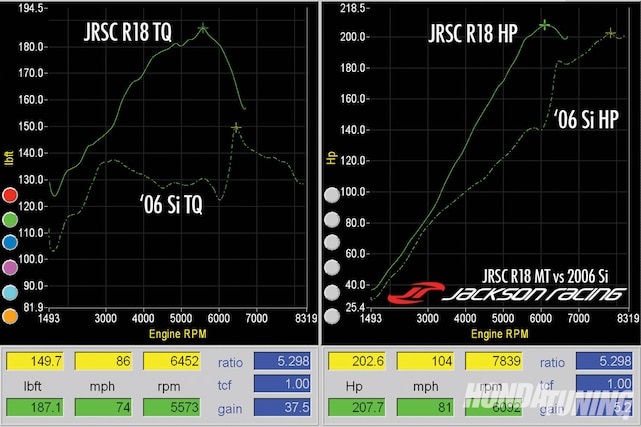