The Latest G Unit from Garrett 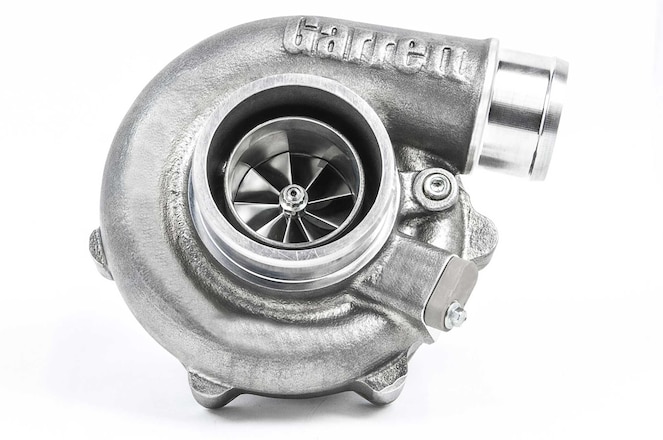 In the world of forced induction, there always seems to be a compromise. If you supercharge your car, expect to suffer from parasitic drag on the engine in exchange for nearly instantaneous boost (in the case of positive displacement blowers) or linear boost (with centrifugal superchargers). For turbocharged vehicles, the trade-off has always been high response with a lower peak output versus lagging response with a higher output. Thankfully, technology has given way to a new turbocharger that aims to bridge that gap better than its predecessors—Garrett's G-Series.

Producing Boost for More than 81 Years

John Garrett founded his engineering company in 1936. Since the '80s, Garrett's time-tested GT Series turbochargers have powered numerous machines to the front of the pack, the top of the hill, and into the winner's circle in a variety of racing genres. It has also been a mainstay in the sport compact industry, delivering boost pressure to a number of high-profile builds dating back to the mid-'90s. In late 2009, Garrett introduced its GTX Series, which took the proven GT turbocharger design and stepped up the output potential with improved compressor wheel designs CNC manufactured from forged billets of aluminum. At the '17 SEMA Show, Garrett introduced its new flagship turbocharger family, the G-Series. These new snails aim to change the game, boasting the highest output from the smallest package.

Honeywell Garrett engineers designed the G-Series turbos from a clean sheet. Unencumbered by materials and designs of the past, these new turbochargers incorporate cutting-edge technologies and manufacturing techniques. The entire turbocharger, from its center housing rotating assembly (CHRA) out to its stainless-steel turbine housing and aluminum compressor housing, is new. There are no shared components with previous turbocharger designs. The best way to appreciate the innovations of the G-Series turbochargers is to examine one from the inside out. 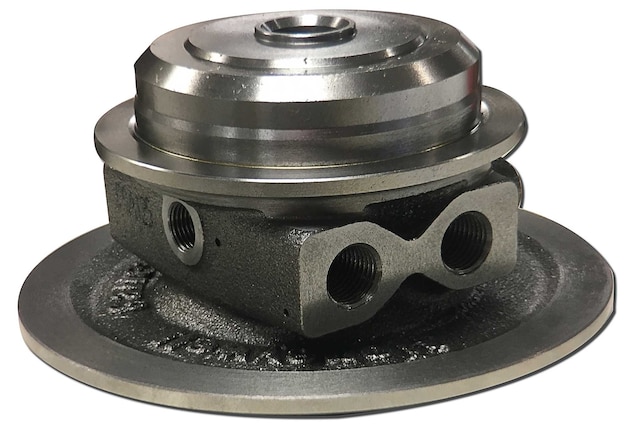 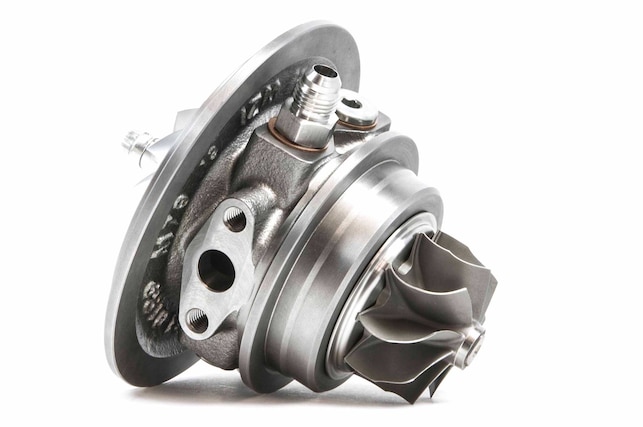 Photo 3/13   |   The G Series CHRA features an integral compressor backplate and dual water ports in and out.

The core of the G-Series turbocharger revolves around its new CHRA design. This housing incorporates an 8mm, dual ceramic ball-bearing cartridge for reduced friction, quicker spool up, and increased longevity. The compressor backplate is now cast as part of the CHRA to reduce overall weight and size. Subsequently, the CHRA's profile is narrower than previous designs, making the overall package smaller and more compact. This is especially beneficial for applications with limited space or tight engine compartments. Garrett incorporated dual water ports on each side of the CHRA to give installers more installation flexibility. Water port fittings and an oil restrictor are also included with the turbocharger kit. 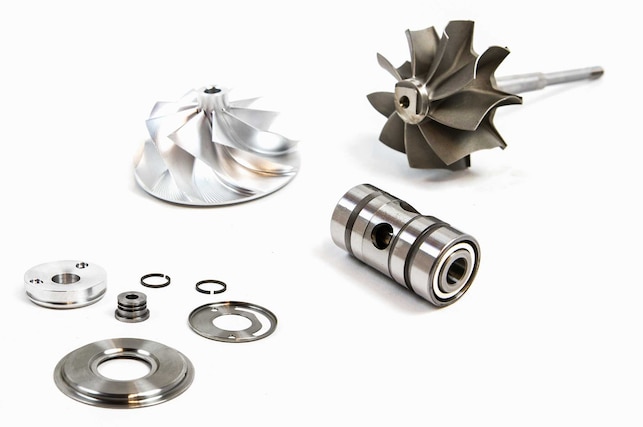 Photo 4/13   |   The G Series CHRA components are specific to this new turbocharger family. 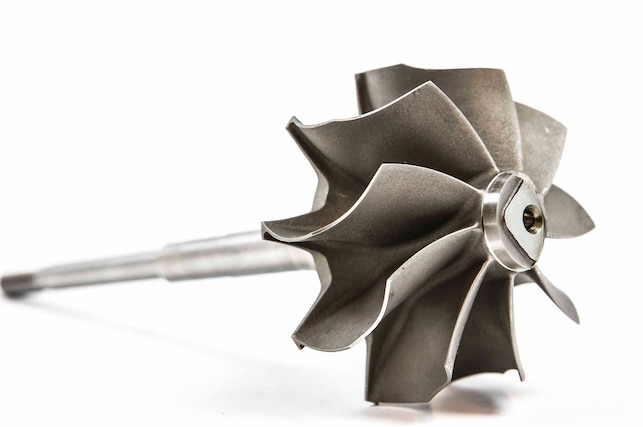 The ceramic ball bearings support the steel shaft that the turbine and compressor wheels mount to. On the hot side, the G-Series turbos feature turbine wheels manufactured from Mar-M alloy instead of Inconel. Garrett upgraded to Mar-M alloy due to its greater resistance to heat. With a rating of up to 1,922 degrees Fahrenheit (1,050 degrees Celsius), a heat range that motorsports turbochargers typically endure, more aggressive tuning can be implemented for greater performance. By comparison, the venerable Inconel alloy that has served reliably for many years is typically rated to 1,800 degrees Fahrenheit (980 degrees Celsius). Garrett also designed the Mar-M turbine wheel with improved aerodynamics and reduced mass. This enables the turbine wheel to harness the high enthalpy exhaust gases more efficiently, which lends to improved response. 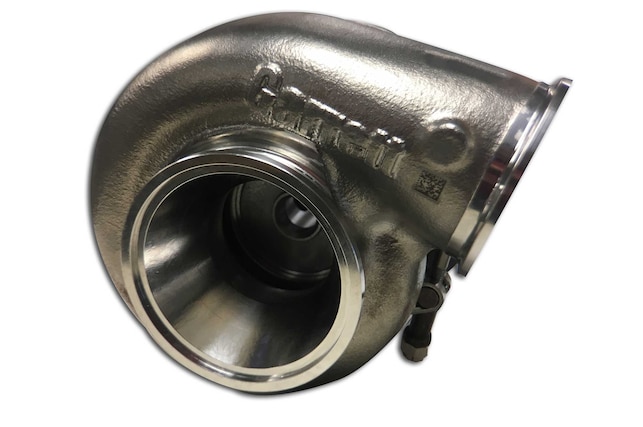 Garrett designed stainless-steel turbine housings to complement the new turbine wheel aerodynamics. The G25 turbine housings feature a 54mm inducer with a 49mm exducer. This is a comparable dimension to the GTX2860R, which has a 54mm inducer and a 47mm exducer. However, the 2mm larger exducer gives the G25 a greater exhaust flow capacity. Garrett offers these turbine housings with an integral, internal wastegate (wastegate actuator available separately) as well as without, for external wastegate applications. The housings mount to the CHRA, inducer, and exducer by way of V-band clamps. 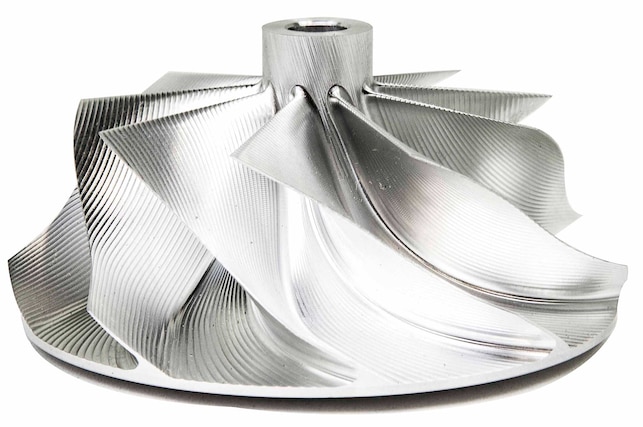 On the cool side of the turbocharger, the compressor design also benefits from advances in R&D. The GT Series relied on cast aluminum compressor wheels that, at the time, delivered boost effectively. The GTX Series evolved and improved on the cast compressor wheels thanks to blade profiles created using CAD software and manufactured using Computer Numerical Control (CNC) machining. For the G-Series, engineers employed computational fluid dynamics (CFD) to achieve superior airflow, quicker response, and improved performance with its latest compressor wheel design. Cut from a forged billet of aluminum using state-of-the-art, five-axis CNC machines, the new compressor aerodynamics work in conjunction with new aluminum compressor housings to provide enough airflow to support (a manufacturer claimed) output in excess of 550 hp (G2560R). For comparison, the comparably sized GTX2860R turbocharger supports a maximum of 450 hp. 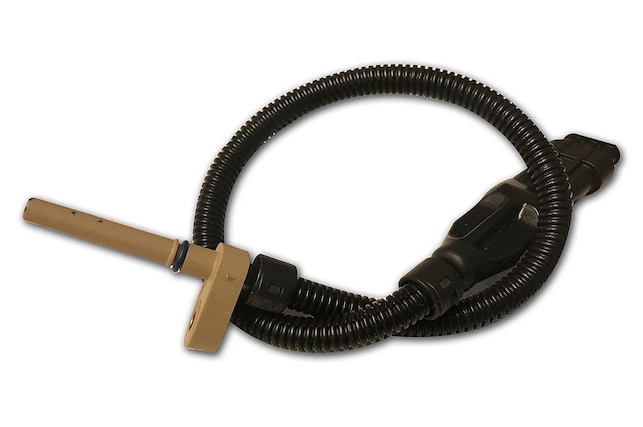 One limitation of a turbocharger is that it can only spin so fast before parts begin to fail. Typically, when this happens the blades of the turbine and the compressor begin to break away from their hub, resulting in what is known as "burst." Naturally, all of Garrett consumer turbos are burst containment tested to ensure that if such a failure occurred, the turbine and compressor housings would contain the broken wheel pieces. One way to ensure that your engine management calibrations stay within the optimal operating range is to install the optional G-Series shaft speed sensor. The compressor housing comes with a machined speed sensor port preset to the proper height. By monitoring and logging this sensor, the engine management system can be optimized within the turbocharger's operating parameters. 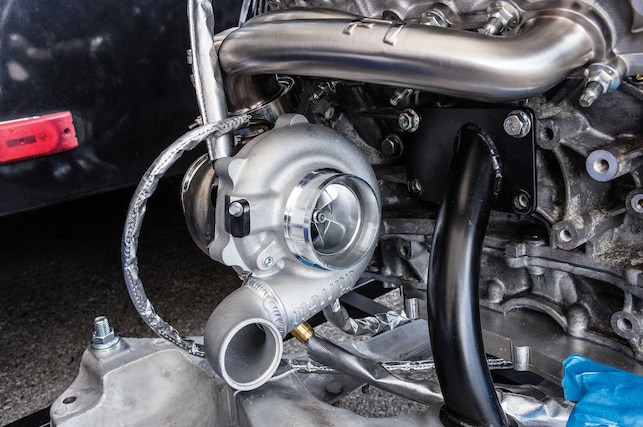 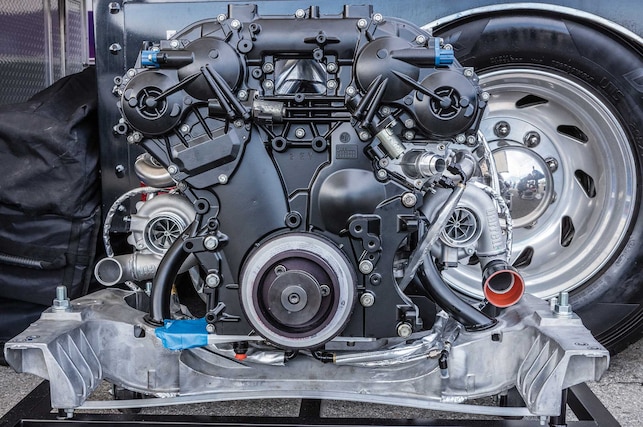 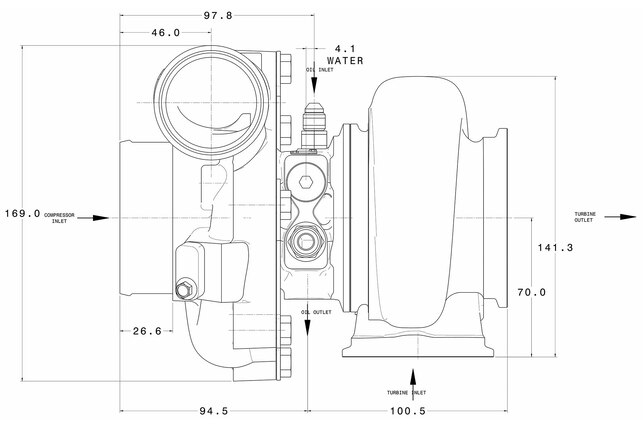 Garrett's initial release of the G-Series starts with two sizes, the G25-550 (G2560R) and G25-660 (G2567R). As you might guess, the "G" represents the turbo family, "25" is the frame size of the turbocharger, and the "-550 or -660" indicates the peak horsepower output that the turbochargers are rated to support. Garrett adds versatility and flexibility by also offering the G25-550 and G25-660 in reverse rotation configurations. These options make the G25 turbochargers ideal for V-engine applications when space is limited. The Reverse Rotation options also make the G-Series turbochargers ideal for V-engine configurations that could benefit from forced induction in a compact package. 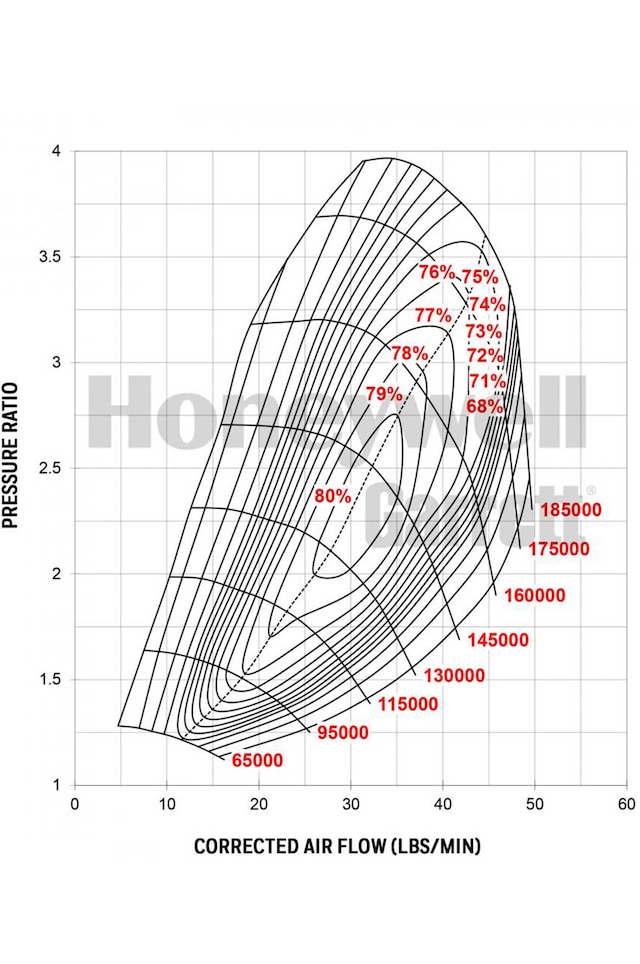 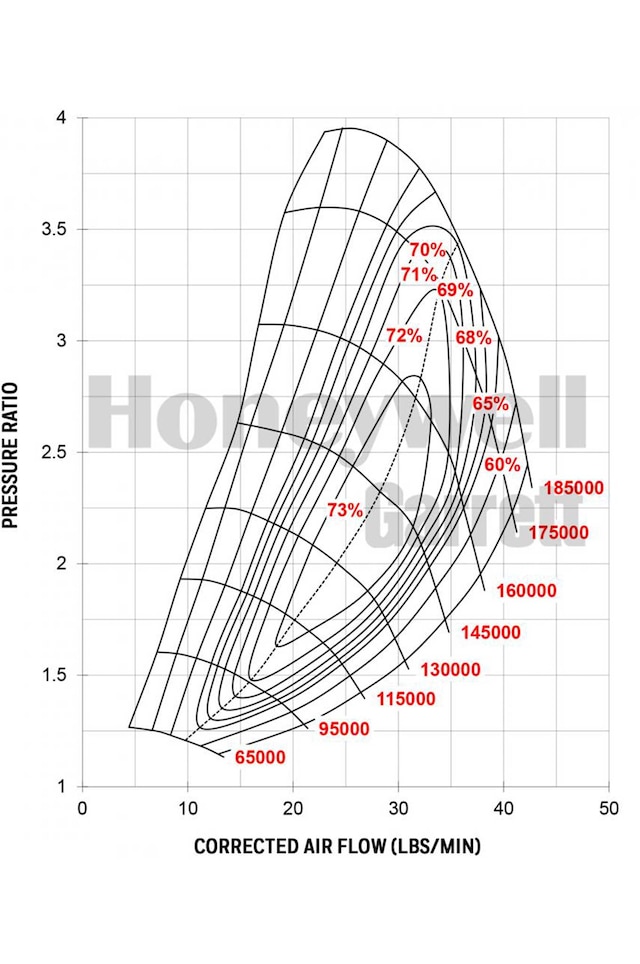 Garrett's diminutive yet seemingly capable turbochargers could deliver that "no compromise" balance of response-to-output performance that forced induction fanatics have been longing for. With a more compact profile, quicker response, and greater airflow capacity to support lofty horsepower targets, Garrett touts the G-Series to be the most powerful small-framed turbochargers on the market today. Whether you're building a single or twin turbo setup, these cutting-edge turbos could put you ahead of the curve and the competition. 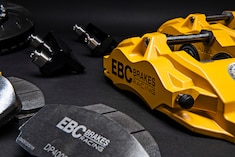 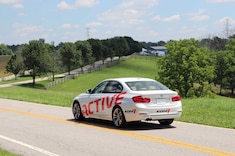