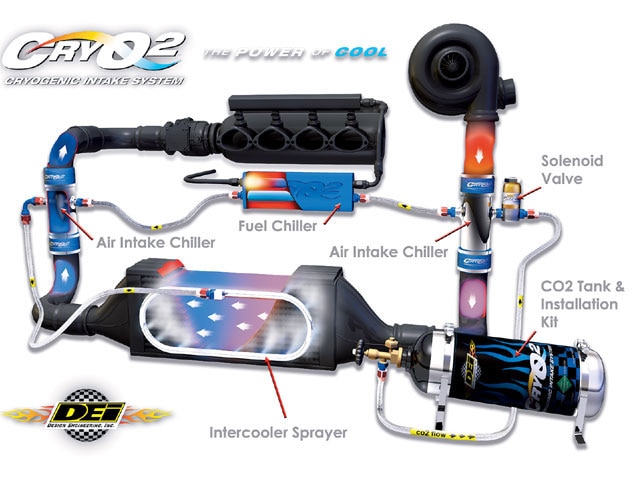 Over a decade ago I was sitting in the far back corner of my high school chemistry class trying to keep my eyes open after a night at the street races. What can I say, I was young. My teacher was going on and on about how when oxygen molecules heat up they become excited and bounce against each other trying to stay apart from each other. However, on the flip side, when oxygen molecules are cooled they move slower and bounce off each other at a slower rate causing them to become more compacted. Even though I got an "A" in the class I didn't really understand the significance of heated oxygen molecules vs. cooled oxygen molecules when I installed my first turbo kit on my Integra a couple years later, as a college student.

Any keen driver will notice their car generally performs better at night than during the day. Why is that you ask? Well, going back to my chemistry class, with cooler temperatures at night the oxygen molecules are less excited resulting in them sticking closer together than during the heat of the day. With the air being more densely packed with oxygen for the engine to consume the more power the engine is capable of making. As we all know it takes oxygen and fuel to make horsepower.

Some might argue the reason the car performs better is because the engine is running cooler. Yes, but only to a degree. The vehicle's cooling system generally does not vary the engine temperature dramatically. Case in point, if you were in a controlled environment (i.e. engine dyno) and you could control the temperature of the engine and the temperature of the air being consumed by the engine. By performing two dyno runs, one with the engine consuming 100 degree Fahrenheit air and one consuming 70 degree Fahrenheit air the dyno run with the colder intake air will make more power. As a general rule of thumb with each 11-degree drop of air intake temperature you can roughly expect a one percent increase in horsepower.

With that being said, DEI has recognized the importance of thermal cooling and has built its business around cooling products. The company's flagship product is their CryO2 intake system. The CryO2 system is designed to reduce air and fuel temperatures. In return, the engine is capable of generating more power. By utilizing liquid carbon dioxide (CO2), well known for its cryogenic properties, the CryO2 system is able to cool both the charge air through the use of a Cryogenic Air Intake and Cryogenic Intercooler Sprayer as well as fuel temperatures through the use of a Fuel Bar. Other companies have used the cryogenic properties of nitrous oxide to cool the intercooler. However, nitrous is considerably more expensive than CO2 when it comes to refilling the bottle.

We decided to put the CryO2 system to the test on our Project Celica and see what resulted on the dyno. Our Blitz-supercharged Celica generates roughly 200 horsepower to the wheels.

Since DEI designed the CryO2 system as a modular system the user is able to install one, two, or three Air Intakes in the system or have two Intercooler Sprayers and so forth.

For our CryO2 system we installed one Air Intake and one Intercooler Sprayer. By data logging the air and water temperatures using our OBD-Rx (for a more in-depth article of the OBD-Rx, see page 48) we are able to get a record of the air intake temperatures from the beginning of the run to the end.

The Blitz intercooler does an impressive job reducing the charge temperatures on its own. We noticed the intake temperatures staying pretty constant from the beginning to the end of the run. Granted, we were only running the engine in third gear from 2000 rpm to redline so the Blitz front-mount intercooler was not even close to getting heat soaked during such a short run.

To show the importance of cooler air intake temperatures we performed five back-to-back runs. The intake temperature rose from 80 degrees after the first run to 109 degrees by the end of the fifth. We also saw our horsepower drop from 196.9 to 192.0 over those same runs.

After a six-second burst from the CryO2 system we performed a dyno run immediately after the last of the five runs and noticed air intake temperatures dropped instantly to 72 degrees. The Celica's horsepower jumped up to 198.9, an increase of 7.9 over the heat-soaked hot run. We should also note that peak power was better than the first cold run by 2.0 horsepower.

We wouldn't be surprised if the intake temperatures would have dropped even further if we used two Air Intakes, one before and one after the intercooler. We should also mention another side benefits of the CryO2 system. With cooler charge air the engine is less prone to detonation, increasing engine reliability.

DEI has proven the importance and benefits of having cooler charge air with their CryO2 system. Our testing of the CryO2 system was performed on a cool 70-degree day. We can only imagine the bigger difference it will make on a 90-plus degree day. For vehicles like the WRX and FC RX-7s with a top-mount intercooler, not to mention naturally aspirated or non-intercooled supercharged cars, the CryO2 system would most likely be greatly beneficial.