November 30th Update! Performance Appraisal now complete. Scroll down to the bottom of the page for more.

We're back. The GT-S looks a whole lot nicer now that it's been lowered. But we're even more impressed at the way the car handles with the Sportline springs. The rates work surprisingly well with the stock shocks. In fact, they work so well that we've decided not to upgrade them just yet.

After Sportlines were installed, Josh from Eibach put the GT-S on their alignment rack to measure the change in camber, caster, and toe. Since some of the stock Toyota components were not adjustable, a set of alignment kits needed to be installed in the rear. Not a problem--Eibach makes those, as well. The Pro-Alignment kits give you 1.75 degrees to work with. Since the car sits lower, the tires have a tendency to move inward in relation to the roofline. Dialing in one degree of positive camber solves this problem. If you don't install the rear alignment kit, you'll wear through your tires fast. Excessive negative camber in the rear will also make your car skittish at high speeds.

We wouldn't really recommend installing these yourself though. If you insist on wrenching on your own GT-S, get a couple buddies to help you out. The hardest part will be removing the front crossmember (they weigh a ton). In addition, you gotta jack the car high enough to comfortably get the anti-roll bar in. Access to lift is almost a prerequisite.

We have a budget to work with, and each piece we plug into the puzzle has to yield noticeable results. Michelle has even gone so far as to put that Louis Vitton bag purchase on hold. Our next round of modifications for the GT-S consists of front and rear Eibach anti-roll bars, measuring 23mm and 22mm, respectively. Eibach uses different materials for their components depending on application, but for the GT-S kit, high-grade spring steel was used for maximum rigidity due to the complex shape of the bars. This minimizes the thickness needed to manufacture the bar while also producing a more accurate and consistent rate throughout the suspension stroke.

We know Eibach products are high-quality, but the attention to detail for the hardware kit itself impressed us. More notably, the kit featured polyurethane bushings with cavities molded into the bushing to hold the sticky lube in place, thereby eliminating squeaking found with non-lubed poly bushings. The even cooler part was that the bushing cases featured Zerk fittings, aka, grease fittings. Zerk sounds so much cooler because most people don't know what you're talking about, and you can look a whole lot smarter when they ask you what they are. (Not that we do that in public or anything). This makes lubing the bushings simple and quick. All you need is a grease gun and a cartridge of marine grease both of which can be found at any auto parts store. 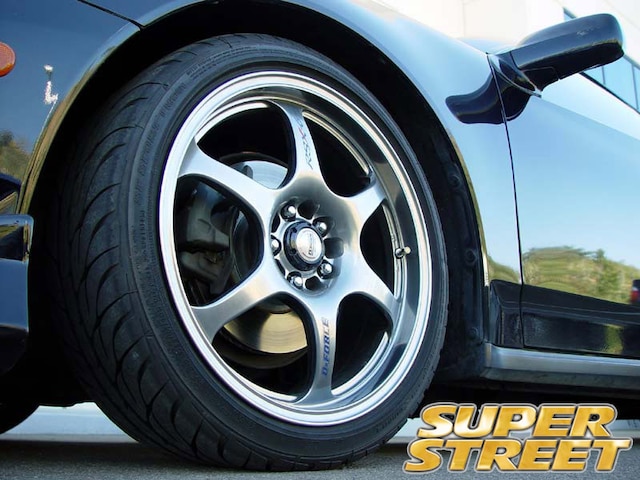 While we were at it, we convinced Michelle to spring for some bigger and blingier wheels and tires to help the car handle even better. Besides, the Falken Azenis Sports were starting to lose the battle with the crispity-crunchy California asphalt. The wheels of choice are 5Zigen RX-6 wheels, measuring 17x7 shod with the some of the stickiest icky: Dunlop SP Sport FM901's. We've driven cars equipped with the FM901's before and were impressed, especially since the tires are so affordable. Don't let the price fool you. These tires stick pretty damn good for street use and seem to be available in every size. It hardly rains in California, so the verdicts on wet-weather handling and water evacuation are still out. But a thorough three-dimensional view from Lens Crafters finest reassured us: the circumferential grooves are connected with the lateral grooves, pretty much allowing water to escape effectively. Of equal importance is the fact that the lateral grooves match the depth of the rest of the tire, meaning more liquid can be evacuated at a faster rate, keeping the tire in contact with the ground.

After standing back and admiring the Celica's new stance, we walked up to the side of the rear quarter panel and checked out the drop. The fender well gap was gone, but the rear wheels looked to be the wrong offset. Two solutions are available in an instance such as this: 1) Replace the wheels with the proper offset or 2) Use wheel spacers. We opted for option 2 since the tires were already mounted. Eibach seemed to have every base covered, because the offered up a set of their Pro-Spacers, which come in a bunch of different sizes, all the way up to 40mm wide. The Pro-Spacers come complete with new studs. Eibach recommended the 5mm versions, which fit perfectly, and fixed our offset problem. Now we know a lot of you may wonder about tire shake at high speeds, but Eibach's Pro-Spacers are hub-centric, and meet ISO9001 Standards which quelled our initial worries. We took the GT-S onto the freeway and hit 100mph with no sign of tire shake or shimmy...

Eibach Sportline Springs
...but straight-line stability, though important, was not our goal with the Eibach tag-team. We just wanted the GT-S to handle better for street usage. The car gets driven every single day, so we did not want to slap on $1500 coilovers and corner weight them each time the car got aligned.

After initially installing the Sportline springs, we were impressed. The GT-S not only looked great with it's more aggressive stance, but stayed planted really well in turns. The car felt more confidence-inspiring during normal driving through Los Angeles. We hit quite a few potholes and railroad tracks, but the car maintained its composure and never missed a beat. Obviously, trimming the bump stops helped, but Eibach's superb research and development was the primary reason that these springs worked well--it's all in the spring rates.

Eibach Anti-Roll Bar Kit
Just when we thought life was good, after the Eibach Anti-Roll Kit (ARK) install, the difference was even more evident. Don't get us wrong--the performance coils did help out. But turn for turn, the ARK gave our teeth the most exposure. The car flat out sticks now. Turns we normally took at 35-40mph could now be handled confidently at double the speed. The car lost some of its inherent understeer while staying securely planted to the asphalt through the long sweepers of L.A.'s freeways.

After looking back on the 2-week project, we were more than satisfied with the performance benefits attributed to the installation of the Eibach components. It felt really good to just install springs and anti-roll bars on car in a staged setting instead of doing everything at once. We learned that it's better to upgrade components one at a time so you can feel the difference and grow with the car's limits. Too often, enthusiasts throw $1600 on coilovers only to never push them to their limits or adjust them like they were intended to be adjusted. Sometimes it's best to keep it simple and upgrade what's really needed instead of what's wanted. So much so that we have just picked up a box-stock 1993 Acura Integra to build up with budget modifications. Come back to SuperStreetOnline on December 9th for the introduction, complete with pictures and plans.