Before you start digging through your past issues, trying to dig up Part I and Part II of Project RSX, we gotta warn you that you're not going to find them. Save your angry e-mails, we did do those stories, we just didn't specify them as Part I or II. We don't really have a good reason for our lack of continuity--you'll just have to accept the fact that we're inept.

Anyhow, we got tired of looking at Nadsy's stock doo-doo brown RSX everyday. The thing is putting down 230+hp to the wheels and is quite the sleeper. But lets get real, he's the editor-in-queef of Super Street magazine. Him driving a stock-looking car is about as socially awkward as seeing anyone from the Sport Compact Car staff at a party. In any event, it was time for a change. Since we've already cracked into his K20 motor with Toda goods, we decided that we should go back to the beginning with wheels, tires, and suspension. You know, the stuff that normal people start off with. Volk Racing wheels were at the top of Nadsy's mind, so we called up our good friend at Mackin Industries, Eddie Lee, to check sizing and offset we should go with on the forged CE28N wheels. Falken makes rubbers that aren't used for prophylactics and we decided to go with the RT-615 because Nads plans to hit the track once we're done with the car.

As for the suspension, we just dusted off the HKS Hipermax RS coilovers...

For the rest of the story, along with technical specifications, photos, and more, pick up the March 2006 issue of Super Street Magazine, on news stands now! 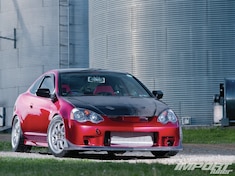