Our rally-hungry, Rocket Bunny, supercharged FR-S gets a suspension makeover

Don't act like you've never bolted anything onto your project car without really knowing what good it'll do. Almost everybody's guilty of it. Especially when it comes to the black art of suspension mods. Do you really know what turning those knobs on top of your shocks will do for you? Read on and find out what we've done to Scion FR-S and why.

Coilovers
Even with a relatively new chassis like the FR-S, coilover options aren't few. It's a consumer base ripe for American-based Taiwanese trading companies and their one-size-fits-all shocks, but it's also one that's attracted the attention of real-deal suspension makers like Eibach. With a retail price of more than $3,600, the company's Multi-Pro-R2 system wasn't designed for Craigslist-haggling pikers, but that's okay. Like any coilover designed and built by a company that isn't in the business of picking a color and then waiting for a Chinese freightliner to dump off a boatload of pallets, Eibach's mono-tube coilovers are based on corrosion-resistant, stainless steel bodies, all of which was designed and tested in the same place they're made.

Besides tires, shocks are the single most important suspension upgrade you'll ever make. When you plow over a bump, your suspensions's springs compress and decompress, absorb vibrations and transfer energy into the shocks. The right shocks won't just soak up all of that energy and dampen any vibrations; they'll also eliminate rocking, pitching, dipping, and wheel spinning. The degree to which all of this happens depends on the shock's internals, though. 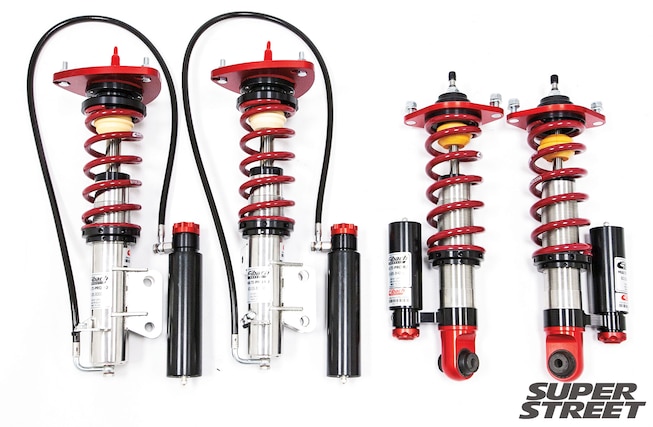 Inside Eibach's Multi-Pro-R2 shocks are large, 46mm pistons whose job is to push high-pressure fluid throughout the shocks' valves. All of this determines how the shocks counteract against spring movement. The mono-tube design allows the pistons to displace more fluid than twin-tube shocks can, which means cooler operation, more consistent damping forces, and higher sensitivity at slower shaft speeds. The Multi-Pro-R2 shocks' external reservoirs allow even more fluid to be moved around for even better performance. Here, hydraulic fluid's stored inside of the shocks' tubes and pistons, just like in any other application, but also in remote reservoirs connected by flexible, high-pressure lines. All this means there's more fluid to soak up any heat and to exert pressure onto the shocks' internals, thus everything a shock's supposed to do can be done better.

Like any good coilover, Eibach's Multi-Pro-R2 features adjustable damping. Dialing in a shock's damping capabilities will generally yield small results; don't expect dramatic improvements if you're still rolling on Costco tires and shot bushings. Turn the knob on an otherwise dialed-in suspension and further improvements can be found, though, especially with coilovers like these, where compression and rebound damping can be tinkered with independently. Why adjust both? In simple terms, compression controls how fast weight is applied toward the tires while rebound controls how fast weight moves away.

Anti-Sway Bars
Nowadays, most cars are sold with some sort of anti-roll bar. In most cases, they're a compromise between something that'll help keep the tires planted and something that won't make plowing over bumps any more jarring than without one. Get it right and you'll end up with a set of bars that'll stop the car's body from excessively leaning to the side when turning. The anti-sway bar acts as a lever underneath the chassis to do all of this. Here, the bar links a car's left and right sides together, forcing the side that'd normally be raised when turning to follow the other's lead. The results help keep the body level and the tires planted. 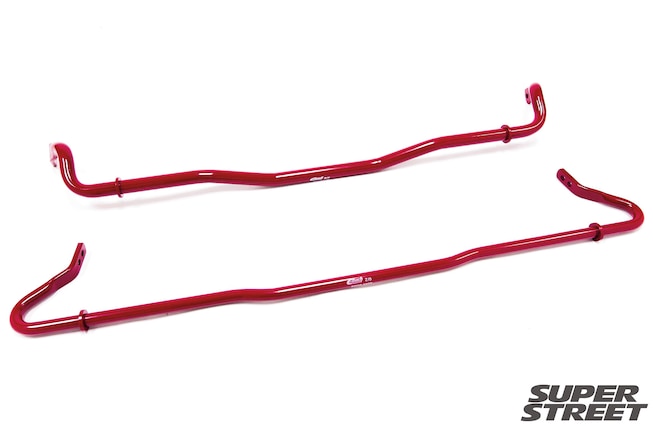 Like most anti-roll bars, Eibach's front and rear system is made up of powdercoated steel tubing, measuring 25mm diameter in the front and 19mm in the back, and includes stiffer mounting bushings. Both bars also feature two positions of adjustment, which, like bar thickness, can increase or decrease their effectiveness through all sorts of complicated geometry.

Rear Toe Arms
Toe represents, in degrees, the direction a tire's pointed when viewed from above. Any time a car's ride height and, incidentally, its camber has been changed, toe is also affected. Improper toe will kill a perfectly good set of tires faster than anything. It'll also destroy an otherwise thorough suspension. Fine-tuning all of this can mean big improvements. Slightly point the front tires out and make turning into corners easier and with better steering response. Do the opposite to the rear and get out of those same turns sooner and faster. 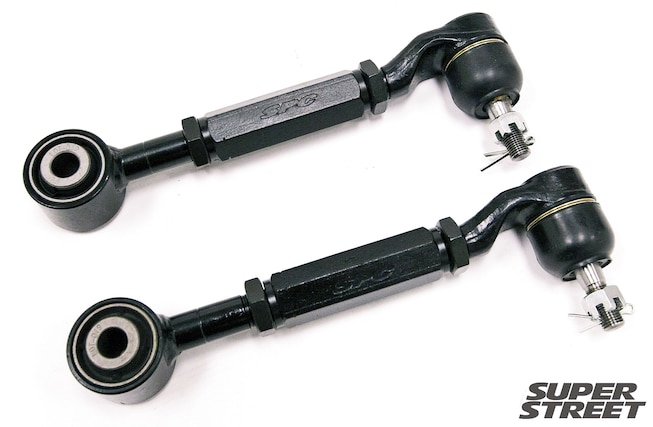 SPC's Rear Toe EZ Arms provide three degrees (plus or minus) of toe adjustment, which is more than enough for you to muck things up or dial in everything as planned. The turnbuckle design makes adjusting things easy, and a factory-style ball joint means maintenance is minimal.

Rear Camber Arms
Lower your ride height and plan on camber not remaining where Toyota says it should be. An adjustable camber kit can fix all of this, which, when properly set, can increase the tires' contact patch while cornering. (The front solution is easier and is made up of a series of eccentric-shaped bolts.) 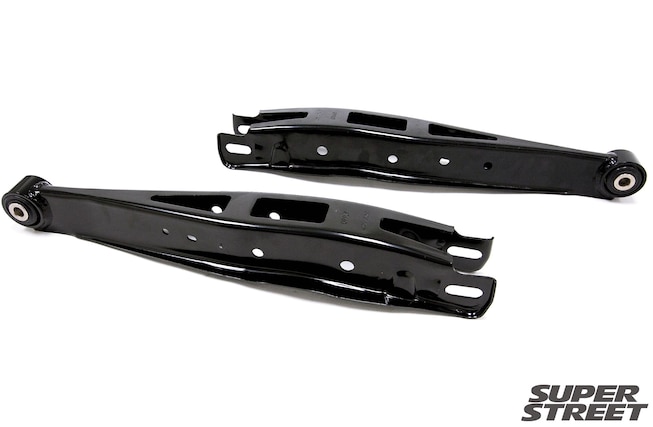 SPC's rear camber arms are made of stamped steel and allow for two degrees (plus or minus) of adjustment. A cam adjuster on the outboard side makes pushing or pulling the wheel assembly in or out a quick job. For street driving, a minimal amount of negative camber (less than a degree, stance people) can result in better handling, but all of this is dependent on other important things like tires and shocks and can often be much less.

The Verdict
I can't express how amazed I am with how our FR-S handles now. After the new suspension was installed and dialed in by Eibach engineers, I could instantly feel how balanced and controlled the car felt the moment I left Eibach. The steering input needed to maneuver the car was effortless—it literally felt like driving a go-kart. But to put the new setup on a true test, I entered Targa Trophy (p. 24), where I pushed our FR-S (and my driving skills) to the limit. While our supercharged FR-S might look like a rocket, it's not the quickest car, especially in a straight line. And driving alongside more powerful cars like M3s and GT-Rs, I was worried about keeping up. But once I hit the canyons of Angeles Crest, to my surprise and to the surprise of others, our little Scion could hang. I've never pushed a car so hard and thrown it so fast around corners in my life—but never did I feel I was driving at dangerous speeds or beyond the car's ability. There's virtually no body roll and the FR-S would simply go where I aimed the steering wheel. Even the guys at Eibach were shocked I was keeping up with them since I was driving an underpowered car and had less driving experience than them. But I have to hand it to their suspension—they know what they're doing, and putting our FR-S through Targa Trophy proved it. - SD 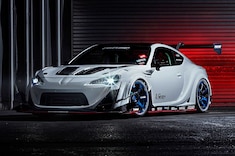