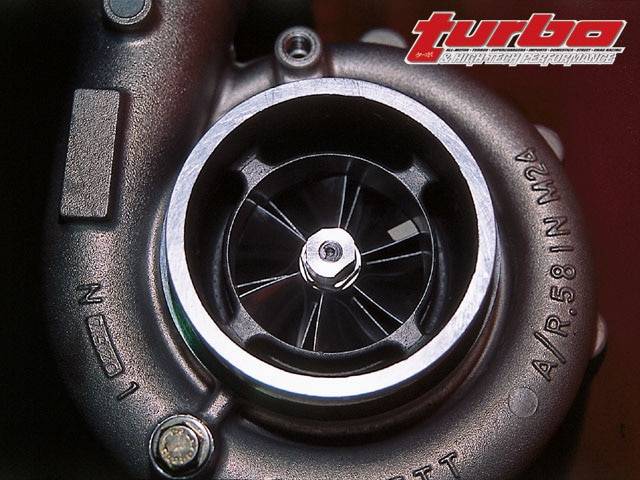 We attended the Garrett Turbocharging Symposium for one reason-to see what new stuff the turbo maker has in the pipeline.

Hearing rumblings that Garrett planned to enhance wheel aerodynamics of its GT-series turbos, we're surprised to learn Garrett Performance Products is going beyond the wheel and expanding its GT series with new GT35R and GT40R turbos that fill some gaps in the GT line-up.

The GT40R is positioned between the GT37 and GT42 and can support from 400 to 700 hp. The GT40R features a divided turbine housing and a trick ported shroud at the inlet. The aerodynamic impact of the ported shroud design is realized at the surge line. The ported shroud extends the surge line on a compressor map at the knee where it jogs to the right, enabling the turbo to handle continuous full load operation.

Garrett has also reworked its existing GT-series compressor wheels and created an all-new design to maximize efficiency and spool-up characteristics. The BCI-18 has been the mainstay of the GT-series ball-bearing turbos. This "go-to" wheel has been enhanced aerodynamically for 2003. Garrett has also developed the C117 wheel and says it will usher in a "new generation of compressor performance." These two wheels join the BCI-5, a GT compressor wheel designed specifically for extreme high-boost applications.

Efficiency is the key to turbocharger performance-both of which were well-illustrated points at the symposium. The GT-series ball-bearing turbos are all about efficiency. The full ball-bearing cartridge (also called dual ball bearing) provides 15 percent quicker spool-up, requires less oil for lubrication and is much more efficient than traditional journal-bearing turbos. When efficiency is increased, other factors down the line are favorably impacted.

The lower compressor discharge temperatures produced by a more efficient compressor means the charge air is more dense and has more power-generating potential. This lower temperature in turn puts less load on the intercooler.

Also, the turbine side does not have to work as hard to drive the compressor effectively. This opens the option of bumping up the size of the turbine housing. In some applications, a bigger A/R on the turbine side can reduce backpressure and pumping losses, improving the overall efficiency of the engine.

On the turbine side there are methods of upping efficiency. First and foremost is the use of modern designs as far as wheels and housings go; ball-bearing center sections are also key. Beyond that, light porting of the turbine inlet will eliminate any casting bumps and smooth airflow. Using a conical diffuser on the turbine outlet also helps flow.

There are also procedures that, although well intended, hurt turbine efficiency. They include use of an older design, a too small turbine, clipped turbine wheels, on-center housings and bored-out housings to accommodate an oversized wheel.

We hounded the PR types for access to charts and materials used by Garrett engineers at the symposium. As a result, we're able to bring you data that was highly confidential and proprietary less than a year ago.