Dip into the intricate world of internal engine geometry and look closely at something you know very little about: rod/stroke ratios. (C'mon, admit it!) Editor Bob demystifies.

If there's any commonality among many small-displacement OEM high-performance engines, it's that they like to scream. And enthusiasts like to make them scream. In some cases (we're looking at you, Honda), the numbers on the tach reach so high, engine developers practically offer the license: Go ahead. Make it sing. It's good at it. So long as you don't miss a shift, all is bliss.

Understanding rod ratio, or the amount that a rod deviates from an imaginary straight line extending from the center of the crankshaft journal to the center of the piston, is key to knowing how these machines deliver power at high rpm.

Lightweight components, stronger materials and shorter strokes enable modern engines to spin very fast yet last longer than ever. A tremendous amount of science goes into engineering and creating these high-spinning machines, most of it rooted in elementary principles of physics and geometry fundamentals anyone planning to build an engine should know.

To figure out an engine's rod ratio (aka rod-to-stroke ratio), divide connecting rod length (that is, the distance from the center of the big and small ends, aka center to center or c-c) by stroke (that is, the distance within the cylinder the piston travels). A Honda B18C1 inline-4, for example, combines 138mm rods with an 87.2mm stroke for a 1.58:1 ratio. 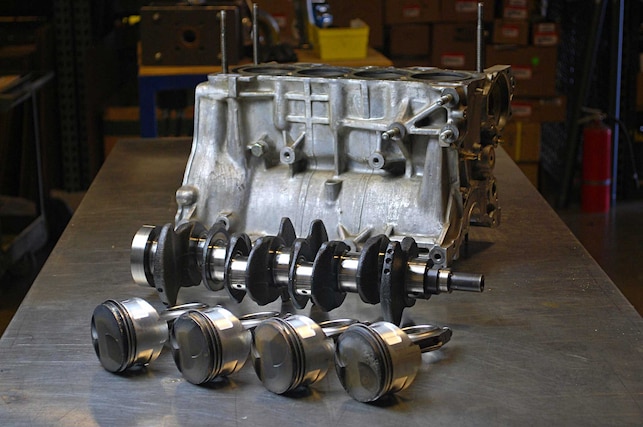 We hear a lot of engine builders shoot for a ratio between 1.5:1 and 1.8:1 on a street motor, with 1.75:1 considered ideal, regardless of application. The most highly developed four-stroke engines in the world - Formula 1 and motorcycle engines - have rod ratios of more than 2:1.

Generally, a lower ratio means a high rod angle, creating greater potential for accelerated wear to cylinder walls, piston skirts and rings; the increase in friction can also raise coolant temps. A low ratio can also lead to higher levels of engine vibration. A low enough ratio, due to the severity of its rod angle, can drive a piston right into the cylinder wall.

Higher ratio engines, on the other hand, don't have the same friction concerns, but compromise in other areas. Air does not fill the intake ports with the same velocity, and there is less demand for the ports to flow as well since there is more time to fill and scavenge the cylinder (we discuss this phenomenon later). This typically means stagnant airflow at low revs and weaker torque. Hey, you can't have it all.

As the chart at the bottom of this story indicates, many Honda ratios—designed for economy - fall on the low side. Honda produces compact, short four-cylinder engine blocks that don't require long rods. Most Honda blocks also feature a small bore. When coupled with a short stroke, the rod angle is still harsh, though not as bad as if the piston were larger in diameter. 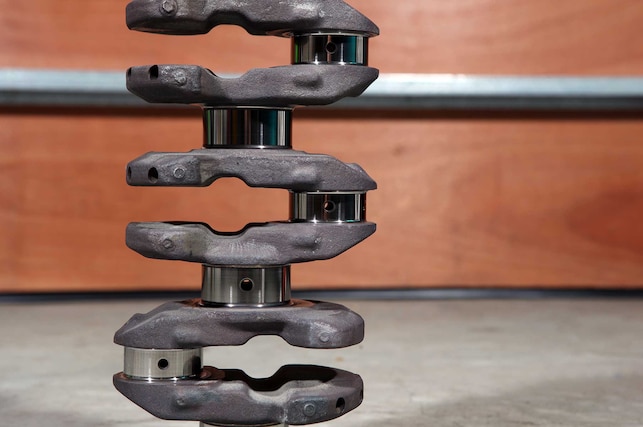 Some tuners take the geometry into their own hands with longer rods. A longer rod makes more torque with the same piston force, and since it's less angular than a shorter rod, reduces sidewall loading and decreases friction. All of this adds up to more power.

Longer rods also give the pistons more "dwell," the brief periods of time the piston is at top dead center and bottom dead center. A longer dwell allows for better flow of intake and exhaust gases since the piston moves slower between up- and downstrokes.

Longer dwell also offers more time to fill the cylinders during the intake stroke and more time to scavenge during overlap. And since the piston hangs out at or near TDC longer, the combustion stroke has more time to deliver a thorough release of energy on to the piston.

In a stroked motor, the piston ultimately reaches greater speeds to cover the additional stroke. The speed makes intake, compression and exhaust strokes more turbulent and, consequently, more powerful. It also comes with its price in component wear, something to consider when looking into parts that increase stroke.

With a short stroke and a long rod, however, the piston accelerates more gently from TDC. It picks up its greatest speed further down the bore, at the point where the crank pin relative to the rod angle reaches 90 degrees. Since the pistons move from TDC slower, the entire bottom end absorbs less mechanical stress.

Advancing Toward A Thin Line

Even the short-stroke/long-rod combo has its limits. To accommodate extra rod length, some builders will move the piston pin higher into the slug or opt for a deck plate. Either method requires an experienced wrench with access to a lot of custom parts. 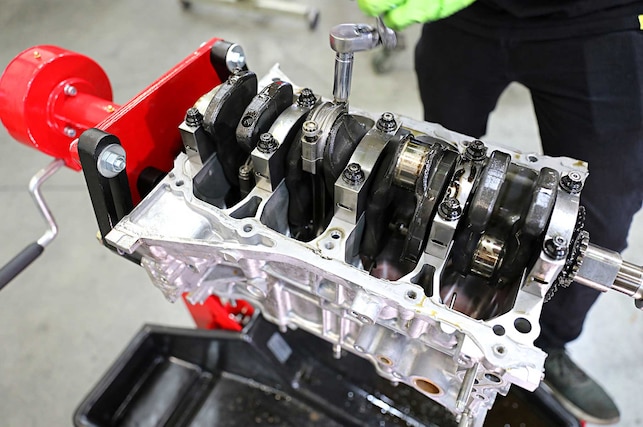 Longer rods in a stroked engine can act to offset any increase in rod angle, but also requires a shorter piston. The deeper you dig into a piston to shorten it, the greater your odds of cutting into the oil ring groove and wreaking havoc with oil consumption. Most piston companies in the sport compact market engineer pistons with tighter ring packs and bridge rings to help avoid this problem.

Regardless of whether you take the stroker route or just run longer rods, you reach a point where you can no longer shorten a piston any further without compromising dependability.

Most engine builders believe longer rods are better, but some enthusiasts still dig the low-rpm torque that shorter rods can make. We advise builders who want a ratio of less than 1.6:1 to use the strongest aftermarket rods they can find, given the angle. We also recommend aftermarket sleeves to better fend off the lateral stress created by the rod angle.

Here's one last nugget to impress your friends with: a formula for calculating piston speed in feet or meters per second. The equation illustrates the point that the longer the stroke, the faster the piston travels at the same rpm.

What Is Rod Ratio?
Photo /

20 Coolest Old-School Wheels Ever Created
Honda Tuning how to