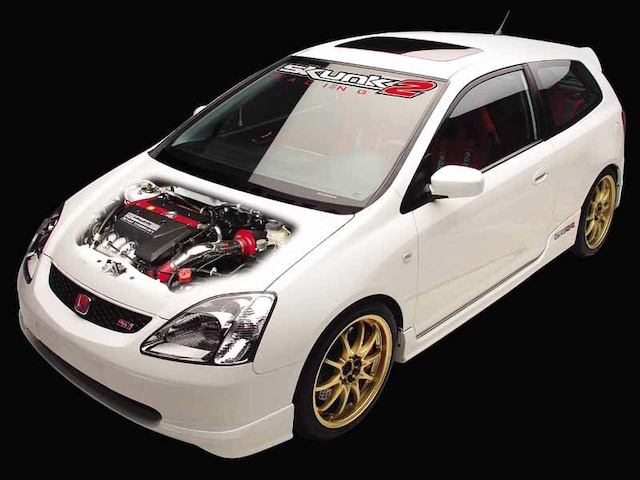 We've been talking about having Skunk2 put a K24 motor into the Civic RR for quite some time, but now comes the moment of truth. Shame on those of you who assumed that we forgot about our promise. We weren't planning on getting you all hyped up on the engine swap and then just leaving you hanging. In fact, we would never do something that wrong. Well, almost never. If we do mess up, it's not our fault. You can blame Chimpy for anything we do wrong because he screws everything up. So remember to punch him in the stomach if you ever see him at an event. Anyhow, back to the Civic RR. The quiet months where you haven't read anything about the RR were for good reason. While we sat around thinking of more reasons to make fun of Jonny, the techs at Skunk2 were working overtime to make the RR even faster than it already was. The last time we checked, the RR was putting 210 hp down to the wheels. Let's see what it can do now.

Making more power isn't as easy at it seems. There are a lot of factors to consider, like an increase of heat. Even though this engine is normally aspirated, it's still going to be pushed to the limits on the track. The task of keeping the engine cool was easily tackled with an aluminum radiator from C&R Racing. We were told that the thicker radiator core should increase cooling by as much as 30 percent. That's going to help the engine's output efficiency and prolong the life span of the motor.

This is what you've all been waiting for. From what we're told, the K24 block is almost a perfect fit in the EP chassis Civic. Using the same top end as the previous K20 setup, horsepower was increased to 216 hp. That really doesn't seem like that much, does it? Well, there are a couple factors to consider. The real magic comes into play when you compare the K20 and K24 dyno charts. Obviously, torque is increased drastically with the K24, but the lines on the dyno graph show solid increases in both power and torque all the way through the powerband.

That's exactly the type of power needed for this car when it's on the track. Also, with the larger displacement of this motor, the intake and exhaust need to be opened up even more so it can breathe. Once a less restrictive intake and exhaust setup is put on the car, there should be gains of near 20 hp. With a little more tweaking of the Hondata computer, the final result should be in the mid 200hp range. So far, Nads is the only one on the Super Street staff who's driven the car, but from what we're told, it's a much more intense drive now than ever before--and it's only about 80 percent finished. We can't wait to see and drive the RR when it's done.