Among Honda's many technologies, none ranks as synonymous with the brand as VTEC. The company's unique, dynamically adjustable valvetrain is, in large part, what helped make '90s-era Civics and Integras cooler than Ford Aspires and Daewoo Lanoses. VTEC--short for Variable Valve Timing and Lift Electronic Control--is more complex than Internet memes about it "kicking in, yo" would have you believe, and has gone through a number of revisions since its introduction in the 1989 Integra XSi and RSi's B16A in Japan. Even today, VTEC remains one of the most important solutions to balancing low emissions and high performance since the internal combustion engine was created more than 100 years ago.

The VTEC story begins much earlier than you think it does--sometime during the early 1980s--and has almost nothing to do with your K-swapped Civic, but instead Honda's motorcycle division where the company developed what was known among its engineers as REV or HYPER VTEC to everyone else. REV allowed for a single intake or exhaust valve for each cylinder to remain idle until more power was needed. In 1984, Honda launched its NCE (New Concept Engine) project, which further convinced the company that developing some sort of multi-cam profile for its automobile engines was a good idea.

Photo 2/6   |
Once VTEC is triggered, oil pressure forces a series of pins into place, forming what is essentially a single rocker arm, which reacts against the camshaft’s larger, center lobe, resulting in a higher-lift, longer-duration valve event.

America was first exposed to VTEC under the guise of the NSX, but it wasn't fully appreciated by average Honda fans until the introduction of the 1992 Acura Integra GS-R. Honda released its SOHC VTEC D-series engine concurrently, but nothing quite altered the small-car performance landscape like the company's twin-cam VTEC engines did. By the mid-1990s, Honda had the sport compact segment by its gonads following the addition of its del Sol B16A3, Integra B18C1 and Prelude H22A1 VTEC trio. It would take years before other manufacturers followed, offering some sort of variable valve timing technology across their own lineups.

The principles of VTEC haven't changed much. Simple, elegant and almost entirely mechanical, VTEC allows an engine to alternate between two different camshaft profiles. In twin-cam configurations, each camshaft features three lobes per cylinder--its two primary lobes and its larger, longer-duration secondary lobe--which correspond to three respective rocker arms. Under normal conditions, the center rocker arm, which is paired to the camshaft's larger, center VTEC lobe, does little more than ride on what Honda calls its Lost Motion Assembly. All of that changes once VTEC engages, though. At a predetermined engine speed based upon the ECU, a 12V signal is sent to the engine's VTEC solenoid, which activates the process. Here, oil pressure forces a series of pins into place, engaging the center rocker arm, which reacts against the camshafts' larger, center lobes, forcing both valves to operate under the VTEC lobe's higher-lift, longer-duration profile. The results allow more air and fuel into the combustion chambers, which means more power. Once engine speed is reduced and the VTEC signal is terminated, the pins retract, disengaging the middle rocker arm, allowing the engine to operate normally.

Photo 3/6   |
One of the first cars to come equipped with VTEC technology was the JDM Integra XSi.

In terms of i-VTEC engines, there's more, and it's called Variable Timing Control (VTC). Here, a specialized camshaft gear allows for continuously variable intake camshaft phasing throughout the RPM range. Based upon all sorts of things that you don't have to worry about, like camshaft position, ignition timing, exhaust oxygen content and throttle position, a 50-degree range of camshaft phasing is possible (25-degree range on K24A2). Much like VTEC, the camshaft gear is electronically controlled and hydraulically driven, resulting in reduced timing at idle and advanced timing at higher engine speeds, which increases valve overlap and power. Fittingly, the "i" in i-VTEC stands for "intelligent" and, together, VTEC and VTC offer an unprecedented balance between performance and emissions. All of this is very good news for everybody except aftermarket cam gear makers.

Honda first offered two types of i-VTEC configurations, unofficially referred to as performance i-VTEC and economy i-VTEC. Performance i-VTEC engines work much like any other VTEC engine but with the addition of VTC. Economy i-VTEC engines are the oddballs, though. Much like Honda's emissions-conscious VTEC-E of the mid-1990s that you don't care about, impressive power figures were not the primary concern during development. Most notably, their exhaust camshafts are stripped of VTEC and their intake camshafts feature only two lobes and two rocker arms per cylinder instead of three. Prior to VTEC engagement, economy-i-VTEC engines make use of only a single intake valve per cylinder, even though they do indeed feature 16-valve cylinder heads. The remaining intake valve cracks open slightly--just enough to prevent unburnt fuel from puddling up behind itself. Also known as valve idling, the process allows the engine to sip fuel at lower engine speeds with improved power up top when both valves open and close normally. Even VTC is tuned differently, with low emissions in mind. As a result, a unique swirl develops inside of the combustion chambers as well as an extremely lean air/fuel mixture, resulting in impressive combustion and fuel efficiency but not a whole lot of power. At 2,200 rpm, the secondary intake valve opens, at which time the valvetrain operates as you'd expect. Unfortunately, overall lift and duration doesn't increase like with traditional VTEC engines. To the disappointment of Honda fans everywhere, as of the 2012 model year, only economy i-VTEC engines are offered.

In recent years, Honda's filed patents for numerous technologies, one of which is a-VTEC, that, if developed, would be the logical variable valve timing successor. Here, camshaft lift will be continuously variable, not just occurring at a specific engine speed that the ECU says it should. Combine that with VTC and you've got the makings for the most dynamic valvetrain to date, resulting in an unprecedented balance of performance, fuel efficiency and low emissions. The design isn't a whole lot different from what pneumatic or electric valvetrains might offer, resulting in valves that can open or close at any time and remain open for as long as they want. For now, it appears as though a-VTEC--or advanced-VTEC as it's called--has been put on hold, but with an all-new NSX looming, now seems like a pretty good time for Honda history to repeat itself. 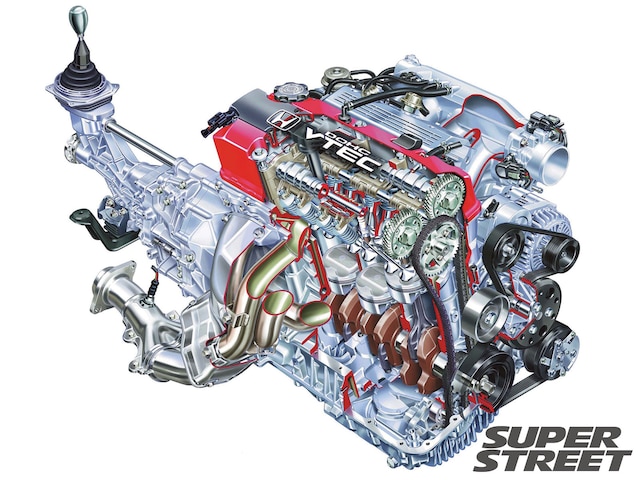 Photo 5/6   |
The S2000’s F-series is an interesting cross between classic VTEC and i-VTEC. Although it doesn’t feature VTC, the F-series does have a K-series-like roller-rocker valvetrain.

If you're thinking of picking up your first Honda project or are ready to pull the trigger on a swap and can't decide which engine is going to be right for you, then check out this quick, basic guide to some of the best options available.

Origin: 2000-2005 S2000
Horsepower/Torque: 240 hp/153lb-ft
But why?: Considered by many to be Honda's most impressive four-cylinder to date, the F20C1 features amazing RPM capabilities without sacrificing mid-range power.