That's mostly because of the folks at Jackson Racing and their Rotrex-based supercharger system, which was designed specifically for '06-'11 Civics that feature what many consider the lampoon of modern Civic engines-the single-cam R18A-and is exactly what gives Honda's less-fashionable coupe and sedan the 100hp promotion they so desperately pine for.

The all-new Civic supercharger system isn't based on the Roots-style blowers of the '90s that are partly what made Jackson Racing a household name among Honda followers. Instead, a centrifugal-based, C30-74 Rotrex compressor is now the heart of the Jackson Racing system. Rotrex superchargers don't work like other superchargers do. They're compact, have higher efficiencies, and are quiet. Inside they feature a traction-drive system that makes power through frictional forces developed through a series of rolling elements. All that means to you is that torque's on tap all the time, all the way to redline. 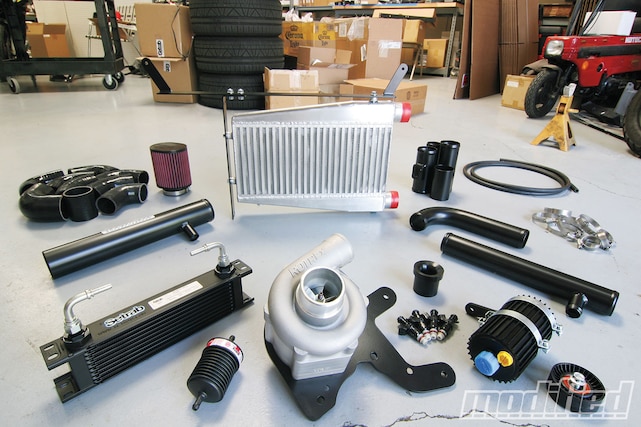 Stuffing 100 extra horsepower of air into an otherwise untouched Civic engine may seem like a playbook for a connecting rod ending up in your lap, but Honda's 1.8L SOHC i-VTEC engine is different and is arguably the company's most able-bodied single-cam mill to date. Jackson Racing's supercharger system and the Rotrex's means of power delivery are different, too. The supercharger's linear power curve gradually introduces torque without the typical force-fed surge you're used to. The results are a more manageable ride but also longer engine life, reduced cylinder pressures, spared rod bearings, and your sanity intact. Your tires will thank you, too.

Jackson Racing's latest Honda kit is also easy to install. The supercharger's oiling system is self-contained, which means any sort of nonsense involving tapping into the engine's oil pressure source or drilling and welding its oil pan are history. The system's intercooler and piping were also eloquently planned, spanning from the throttle-body to the supercharger to the intercooler without so much as rubbing a hose, resulting in a straightforward installation. If you've so much as installed an accessory belt or changed a valve cover gasket, the likelihood of you being able to install this kit without bungling something up is favorable.

Photo 4/6   |   At the heart of the kit is a beltdriven Rotrex C30-74 compressor that produces a healthy 10 psi of boost. Its oiling system is self-contained, which means there are no maintenance issues to fuss with.

Driving the Jackson Racing-equipped Civic feels, sounds, and drives more like a naturally aspirated Civic than one persuaded by boost. However, the 100-whp increase in power provides some serious entertainment behind the wheel, and all of a sudden your Civic has gone from a sedate commuter to a rather quick street machine.

In typical Jackson Racing form, the company's R18A Civic kit is available in multiple configurations, each modular with one another, in both five-speed and automatic versions. The kit's upper-crust, track-only version is what we're driving, though, which browbeats the Civic Si power mark at just over 242 whp at 10 psi as measured on Church Automotive Testing's Dynapack. But don't let the company's Track Pack appellation fool you. Despite the extra 100 whp, Jackson Racing's test mule is every bit as streetable as any other Civic, and if it weren't for its recommended cat-delete, CARB, and a room full of lawyers, they likely would've named it something else. Aside from the track-only option and entry-level Tune it Yourself Kit, the company's remaining R18A kits are in fact CARB and emissions legal thanks to a slight boost restriction, which means California drivers can install one, pounce on Civic Sis, and not burst into flustering frenzies come time for emissions testing.

Also responsible for you not blowing up your Civic's engine is either a Hondata ECU reflash or a pretuned Hondata FlashPro system that works in collaboration with higher-flowing OEM (standard kits) or DeatschWerks (Track Pack kit) fuel injectors. Almost counterintuitively, the system also reportedly preserves Honda's exceptional fuel mileage.

According to Jackson Racing, its engineers spent more than a year developing its latest Civic supercharger system, logging more than 20,000 miles on it and testing it in all sorts of weather, even driving it back and forth from the company's Southern California headquarters, exposing it to Colorado's low temperatures and high altitudes, all in an effort to ensure that flying drive belts and detonation don't happen to you. The results are straight-line performance that'll shellac any Si. The Civic DX was never supposed to be this fast. But now it is.

Photo 5/6   |   With reliable and worry-free performance, not to mention CARB legality in California, Jackson Racing’s supercharger kit is one of best modifications available for eighth-gen Civics.

Photo 6/6   |   With reliable and worry-free performance, not to mention CARB legality in California, Jackson Racing’s supercharger kit is one of best modifications available for eighth-gen Civics.
View Photo Gallery (6) Photos