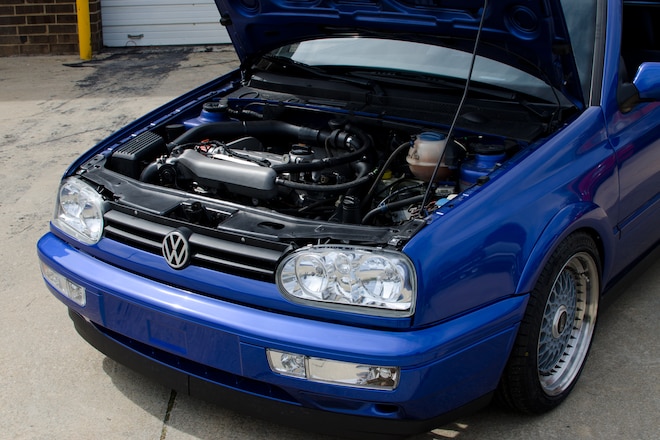 After many months of R&D, Black Forest Industries, a company that specializes in Volkswagen/Audi aftermarket parts, developed an Mk3 1.8T Drop-In Conversion Kit ($799). The company’s test mule was a clean 1998 Volkswagen GTI 2.0 ABA with 107000 miles on the clock.

Many power-lusting Mk3 owners watched the project unfold on the vwvortex.com forum that chronicled the build, with eager anticipation of the kit’s release. Forum member Hurt had this to say about the build, “If this works, I will be buying one.” The build was set up in three stages, with a core concentration on the powerplant.

Stage 1 involved the basic drop in kit utilizing the K03 turbo, which included C2 Motorsports’ custom software, BFI custom machined and modified distributor, and additional custom hardware items such as: ignition plug wire, charge plumbing, and downpipe. Stage 2 offered a K04 turbo upgrade, with an upgrade to a 02A transmission if necessary. Stage 3 featured a 02A conversion if the 020 had not already been popped.

In the end, the build was successful and the kit, which works with all 96-99 MK3 VW OBDII 2.0 ABA (Golf- Jetta), was released to the public. A few changes were made prior to the release, which included the addition of a 3.5 bar fuel pressure regulator, as well as some tweaking to the original distributor design. The company also put together an installation guide, which can be viewed here.