Helping the 1.4L turbocharged four churn out some more ponies.

When it comes to engine performance, especially a turbocharged one, there are no better modifications than ones that improve the breathing capacity of the motor.

Walker Morgan of Morgan Performance Fabrication is a man who focuses on such performance-oriented items for the Chevy Sonic platform. That’s not to say he doesn’t build some amazing parts for other cars. We have actually featured his beautiful Mitsubishi Evolution, and our November ’13 RX7 cover car had its turbo setup custom-built by Walker himself. High-quality fabrication is what MPFab does best, and it just so happens that when this Sonic project came up, Walker and I got to chatting and he mentioned that he actually owned a Sonic and was going to be producing performance parts for the car. Naturally, I was keen to work with him for Project Sonic Boom’s go-fast goodies.

Photo 2/24   |   The stock intake box is made more for durability and noise reduction than performance.

Factory intakes have come a long way and flow well, but they need to meet certain criteria like noise levels, filtering percentage, durability, etc., so there are still power gains to be had in an intake system that is designed with performance in mind.

Aside from the spot-on fitment and perfect aluminum welds, MPFab’s intake uses a heat shield to protect the air filter from ingesting the engine’s hot underhood air temperatures. While this may seem trivial, it’s actually very important and helps a great deal when it comes to maximizing power out. The cooler and denser the air, the better.

Photo 4/24   |
MPFab’s intake system includes a velocity stack on a high-flow filter for optimal performance gains. Plus, a heat shield ensures only fresh, cold air is delivered to the intake.

That’s why I decided to add a ram-air setup by way of eliminating the front high beam headlight and creating a duct through it that would feed the air intake.

This required a bit of Dremel work to the headlight but proved to be a simple DIY task. The result is an intake system that has a constant flow of fresh air.

Creating a ram-air induction setup through the high-beam light requires a bit of Dremel work and a metal, mesh scrim to keep large pieces of debris out.

You don’t have to actually do this to feed fresh air to the MPFab intake; the factory tubing has a cold-air draw (a restrictive one though) from the fender. The headlight duct improves on that and happens to look very aggressive as well.

Photo 11/24   |
There’s no shortage of fresh air being delivered to the intake.

With an ECU tune coming in the near future, boost pressure was inevitably going to increase, and while the Sonic comes with a factory front mount intercooler, its effectiveness to cool the intake charge after repeated full-throttle runs is lacking. Heat soak is the enemy, and an upgraded intercooler will help tremendously.

Working with Garrett, an efficient, properly sized intercooler core was selected, and ATP Turbo welded some of its cast-aluminum end tanks to it. Once again, MPFab came to the rescue, figuring out how to properly fit the kit to the Sonic and fabricating intercooler piping to aid in flow and reduce the overall length and bends over the stock setup. MPFab dyno-tested its complete intercooler upgrade versus the OEM and was able to actually show increased power gains in the midrange of 15 whp and 25 ft-lb from the cooler charge temps. An equally important piece of the puzzle is a free-flowing exhaust system. It can help tremendously in power production, especially when you combine it with other mods.

Since the Chevy Sonic RS has a unique rear bumper valence with exhaust tip exit, there are very few companies that produce an exhaust system that fits. Luckily, MPFab was able to build a system that fit perfectly. Its signature 3-inch Anaconda downpipe/midpipe combo gets rid of the restrictive factory primary catalytic converter altogether while replacing the secondary cat with a 100-cell MPFab unit. The result is a turbo that now has very little restriction and can be pushed harder and faster.

Photo 16/24   |
Handcrafted for perfect fitment and quality, MPFab’s turbo-back exhaust system not only looks good but sounds great as well.

Photo 18/24   |
The full 3-inch Anaconda downpipe replaces the primary factory catalytic converter, freeing up the turbo for optimal flow, while the 100-cell count high-flow cat in the midpipe makes sure to keep emissions in check.

MPFab offers a 3-inch after-cat exhaust, but since this Sonic will see lots of street driving, a 2.5-inch system was selected because it’ll significantly quiet the exhaust note but won’t restrict power in any manner. Remember, this is a 1.4L engine; there’s only a certain amount it can flow. And even with the mods we have planned, it won’t outflow the 2.5-inch piping.

Photo 20/24   |
Measuring 2.5 inches in diameter, the MPFab after-cat portion of the exhaust system fits like a glove and has zero annoying drone thanks in part to the resonator and proper muffler.

There’s a finite amount of power that can be made just with bolt-on power mods. To help squeeze every last ounce of go-fast juice from the engine, a water/methanol injection system from Snow Performance was installed.

Photo 21/24   |
For a serious shot of power, Snow Performance’s Stage 2 Boost Cooler water/methanol injection kit is the way to go.

If you don’t already know, water/methanol injection is a great way to reduce detonation. In simple terms, it’s similar to adding high-octane race gas to your pump gas, therefore allowing for more boost and timing to be added, resulting in big power gains.

Photo 23/24   |
Thanks to the guys over at Cyrious Garage, the installation of the kit looks trim and tidy while taking up very little trunk space.

Just how much? That remains to be seen. Our trusty Sonic has yet to see a dyno or receive a tune, so we haven’t set up the Snow Performance system yet, but you can bet it’s coming very soon. All the right engine mods are now in place to take the Sonic RS from its stock 138 hp to more than 200 hp. 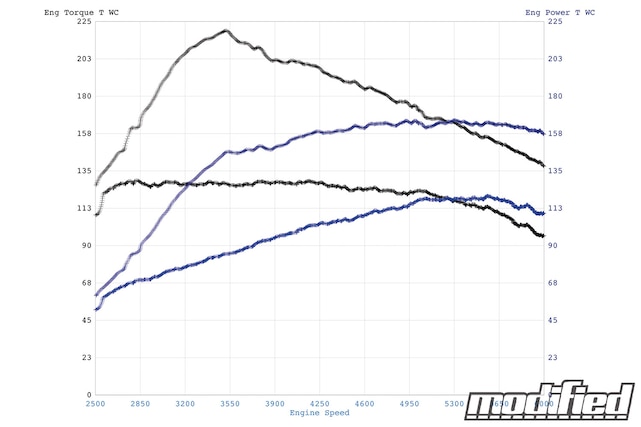