A guide to Nissan's most desirable power units

Few Japanese automakers have consistently churned out as many performance-oriented engines as Nissan. For decades, the company has continually offered at least one engine that people who care about going fast can relate to. Here, all sorts of horsepower—or at least the potential thereof—is preceded by no official form: four cylinder, inline-six, V6, standardized valvetrain or variable, turbocharged or naturally aspirated.

Updated May 2020: More than 6 years after this story first ran and we're living in an age growing VR38 V6 viability; when built right, the R35 GT-R mill is capable of some insane numbers, like the 1,200hp OCD Works-built engine in pro drifter Chris Forsberg's Formula D 370Z, or Alpha Logic's own 3,400hp drag-racing beast. We're not throwing shade at any other motivator on this list—especially since RB and SR motors will always be cool—but the potential of the VR is just bonkers. The following are Nissan's top eight performance engines, in no particular order. 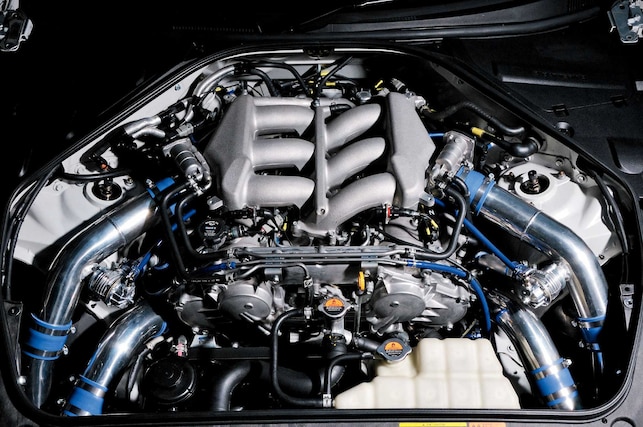 Why You Want One: It's the king of all Nissan engines. Never has a more powerful mass-produced Nissan mill been available. The all-aluminum V6 features two cams per head with CVTCS on the intake side. A number of precautions were taken to ensure optimal power, control, and its 50-state LEV2/ULEV status, like highly dynamic air/fuel controls that are based on engine load, a thermostat-controlled lubrication system, and turbocharger-integrated exhaust manifolds that help reduce weight. All of these details and more are carried out in a dedicated clean room at Nissan's Yokohama plant by dedicated technicians.

Power Potential: For an easy 500whp, update the entire exhaust system post-turbochargers with something better flowing, fit a more efficient intercooler and higher-flowing intakes into place, and have the ECU reworked. Larger turbos and simple fuel system upgrades, like the injectors, pump, and mass airflow sensor, will get you another 150whp. For significantly more power, forged internals must also be added. 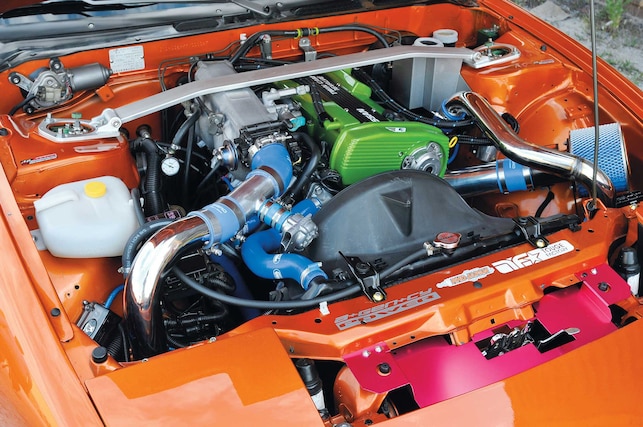 Why You Want One: Last but best iteration of the Nissan long-lived CA platform, the factory turbocharged and intercooled CA18DET defines entry-level boost. A low-cost alternative to the more expensive SR20DET, complete 1.8L engines can be found for about as much money as a couple of SR20DET bolt-ons, making any boost-related mistake a whole lot less painful should something go awry.

Power Potential: Upward of 300whp is possible by means of a larger turbocharger, more efficient intercooling, and supporting fuel and ECU tuning modifications. Even more power can be had but the CA18DET's cost-effectiveness must be questioned at this point as SR and RB alternatives make more sense economically when venturing into the 400whp range.

Dive Deeper into Nissan's Best Power Plants
Know the Ledge with the SR20DET, Nissan's Most Popular 4 Banger
Nissan RB26DETT vs. Toyota 2JZ-GTE - Which Straight-6 is Sexier? 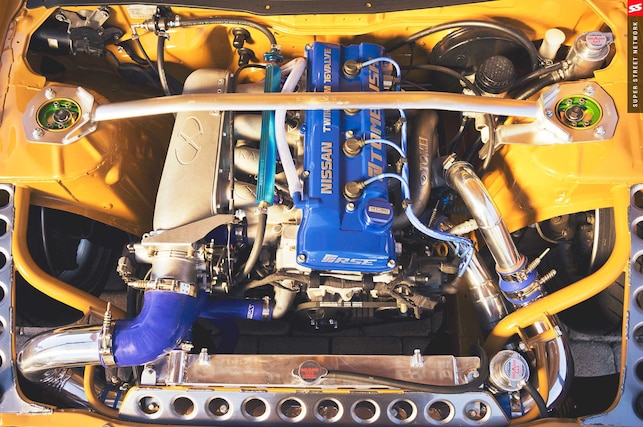 Why You Want One: It isn't boosted, it doesn't feature any sort of variable valve timing, and most of them are made in Mexico, but none of that means the 2.4L truck engine isn't one of Nissan's best. The KA24DE is big. And strong! That much displacement can't be had from any SR engine, and because of the KA's girth, sleeving the cylinders isn't necessary—even if power goals are lofty. Finally, unlike the SR20DET's rocker arms that can be points of failure at high engine speeds, the KA's antiquated shim-over-bucket design eliminates that risk.

Power Potential: The process of generating more than 350whp from the KA24DE is no secret and, not surprisingly, involves turbocharging. The biggest problem isn't fitting a turbo system into place but rather its fuel system and mass airflow sensor that weren't designed to accommodate a whole lot more than 200whp. A high-volume fuel pump, higher-capacity fuel injectors, and some sort of ECU tuning solution must all be addressed when turbocharging the KA engine. 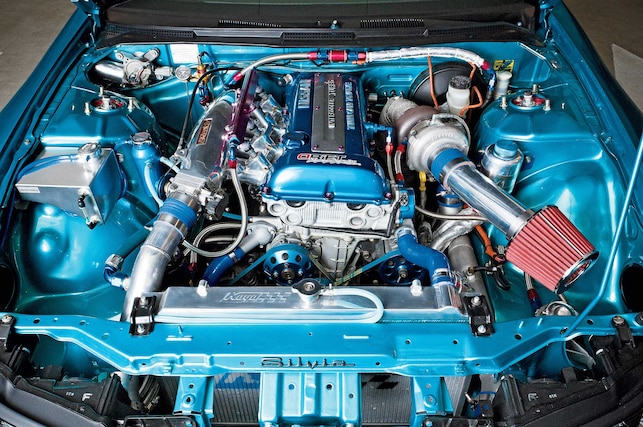 Why You Want One: The SR20DET's square geometry lends itself well to the ideal balance between high-RPM shenanigans and respectable low-end torque. The factory issued T25 or T28 turbo also helps. Variable cam timing and available individual throttle bodies on select variants make this one of the most impressive, well-appointed four-cylinder engines ever.

Power Potential: 350whp is easier to come by here than with any other Nissan four-cylinder mill. Swap turbochargers, give it more fuel, address the tune, and you're done. For even more power, for example beyond the 450whp mark, a more durable head gasket and head studs must be used along with forged internals. Aggressive cams may also be needed but require solid lifters and matching, high-performance valve springs to ward off valve float. 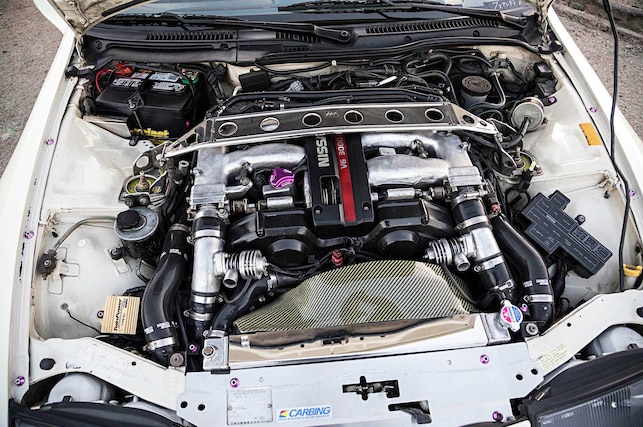 Why You Want One: The Nissan 300ZX is the stuff mid-1990s dreams are made of. The twin turbocharged VG30DETT makes sure of that. Exclusive to Nissan's Z32 chassis, the 300hp V6 was rivaled by few during its day. Here, a cast-iron block sits below a pair of twin-cam cylinder heads that feature NVTCS, Nissan's early adjustable valve timing control, that's all fed through a pair of turbochargers each with a dedicated side-mount intercooler.

Power Potential: Plan on backing off around the 400whp mark if the extent of your mods are a larger turbocharger along with simple fuel and tuning adjustments. More power can certainly be had but forged pistons, at a minimum, must be added to prevent disaster. With the right internals, double power figures are no challenge, as is often the case with cast-iron blocks. 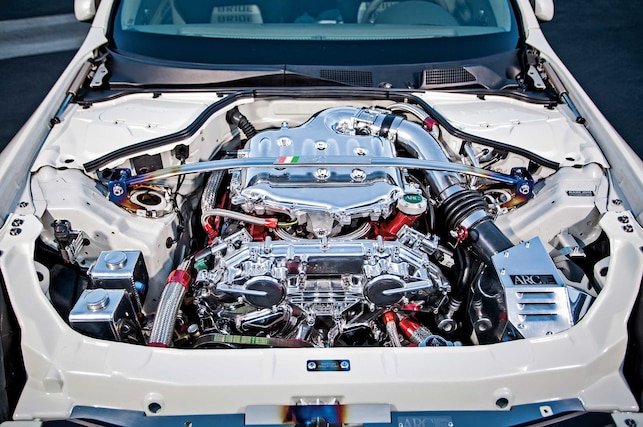 Why You Want One: For years Nissan's big-bore VQ engine has found itself on almost every definitive best-engine list, and for good reason. Forged connecting rods, an updated variable valve timing layout, exceptionally flowing cylinder heads, and moly-coated pistons all lead to the VQ35DE's efficiency and potential. Follow in the footsteps of in-house Nissan tuning firm Nismo for a 300hp version without the aid of forced induction. There's also no shortage of available parts for this engine, which makes the path to modifying one relatively easy.

Power Potential: You've got three options when looking for more power: naturally aspirated, supercharged, or turbocharged. Below the 400whp threshold, modifications remain simple. Beyond that, the bottom end must be strengthened and the car's return-less fuel system addressed. For simple, reliable, naturally aspirated power in the 300whp range, look to higher-lift, longer duration cams with the appropriate valve springs, a high-flowing exhaust and headers, a proper intake, and some sort of tuning solution to make all of this happen. Supercharger systems that yield roughly 350whp are the entry-level, forced induction alternative that won't result in thrown connecting rods. For more power or for most turbocharged applications, plan on a forged bottom end, all sorts of machine work, and a reworked fuel system—mostly because the VQ35DE is natively naturally aspirated and simply isn't prepared for boost. With the right standalone engine management system, strengthened internals, and appropriate cooling, 750whp and beyond isn't entirely unreasonable. 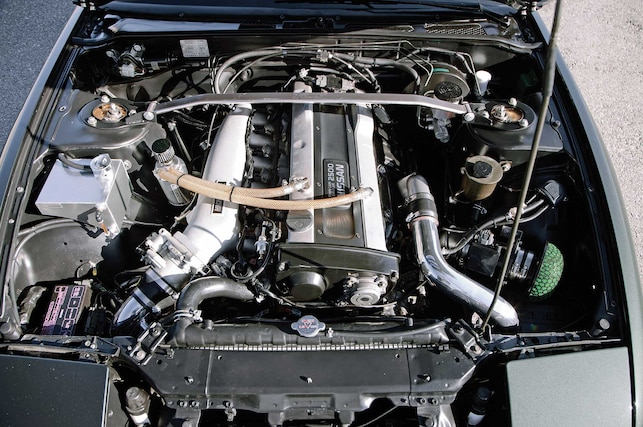 Why You Want One: A couple of variations exist, but it's the more powerful NEO version that features a revised valvetrain and camshafts with VCT as well as top-feed fuel injectors and a larger turbine housing. A cast-iron block is standard here as are RB26DETT connecting rods for NEO engines, which means big power can be had with little additional strengthening.

Power Potential: Generating somewhere in the neighborhood of 450whp from the RB25DET isn't hard. The parts list is no surprise: a bigger turbo, supporting fuel upgrades, ECU tuning, and a free-flowing intake and exhaust. Upgrading the factory exhaust manifold to an aftermarket piece along with an external wastegate will also prove worthwhile. Even more power is within reach, provided fuel and tuning are both addressed. 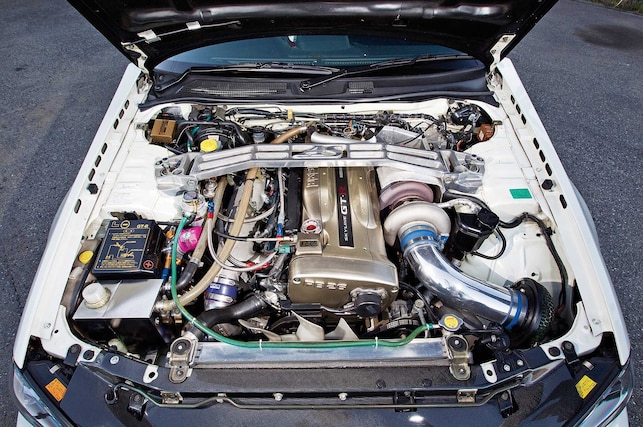 Why You Want One: The RB26DETT is the most powerful RB engine with the most potential. It shares an architecture similar to the smaller, 2.5L engine but features individual throttle bodies and parallel-mounted, twin turbochargers.

Power Potential: Tuning tips don't differ a whole lot from the RB25DET. Be sure that the timing belt is in good working order and tend to any vacuum and water lines that can prove to be notoriously brittle problems.

2018 Honda Civic Si Project Car Gains 130 Horsepower and Over 120 lb.-ft. of Torque!
SuperStreetOnline how to