There's no denying that one of the easiest and most cost effective ways to see horsepower gains of more than 30 percent on a stock engine is forced induction, which remains to be one of the most sought after upgrades on the market today. Aftermarket intakes and exhaust systems enable your engine to breathe better. In many cases with building a naturally aspirated engine, however, minimal gains will be found with bolt-ons. Unless you're prepared to go further into dissecting your engine, expect to pay a gratuitous amount of cash on a set of aftermarket camshafts, high compression pistons, and port and polished cylinder head.

The Scion FR-S/Subaru BRZ, and Toyota 86 have made their presence known within the tuner market as the "must-have" tuner car. Inspired by a collaboration of rear-drive Toyota models that date back as early as the '60s, which include the Sports 800, 2000GT, and the AE86 Hachiroku, Toyota engineers took a page out of the popular AE86, a vehicle that the Scion FR-S and Subaru BRZ sports cars carries many similar features. Both vehicle platforms share the flat-four-designed boxer engine using Toyota's cutting-edge D-4S injection system, which incorporates both direct injection and conventional port injection for each cylinder. The D-4S system, partnered with a high 12.5:1 compression ratio, results in delivering a factory-rated 200 hp and 151 lb-ft of torque, a respectable power figure for a naturally aspirated car, but nowhere near what tuner enthusiasts crave when it comes to performance numbers.

Innovate Motorsports decidedly took matters into their own hands, well aware that both sister engines, the FA20/4U-GSE, were in dire need of an adrenaline boost in power. Upon painstaking hours of R&D, the Lake Forest, CA-based company released a high-performance twin-screw supercharger system for the Scion FR-S, Subaru BRZ, and Toyota 86 vehicles that promises to improve power gains by over 30 percent along with an OEM quality components and fitment. The supercharger system includes Innovate's proprietary twin-screw supercharger, high-performance aluminum intake manifold, molded intake tubing, and all necessary hardware and can be completed in as little as a day with simple hand tools.

Innovate's supercharger is belt and pulley driven—much like a centrifugal unit but how they achieve boost pressure differs. Comparing the twin-screw versus the centrifugal-type supercharger, the centrifugal-type chargers are more linear and build pressure by compressing air by way of an impeller. Boost pressure builds as rpm does, similar to a turbocharger. In direct correlation between engine speed and pressure built, a centrifugal setup can have lag, but makes up for the loss by delivering top end power that is "peakier" than screw types. Centrifugal units are popular among the domestic tuner market due to its price point and availability, but its downfall is mainly bad throttle response at lower rpm, which is a major factor with smaller-displacement engines like Scion and Subaru's 2.0L engine.

Why consider twin-screw superchargers? Twin-screw superchargers (positive displacement) deliver immediate boost at any rpm. Screw-type superchargers have an axial-flow design that compresses the air as it moves between the screws to create positive pressure and is able to produce a dramatic increase of power. A twin-screw unit is more efficient than a centrifugal because of the location of the blower as it pertains to when the compressed air enters the combustion chamber and because the air from a twin screw is cooler than the compressed air from a centrifugal because of its location. The location and efficiency allows twin-screw-type superchargers to develop maximum airflow from low rpm and maintain it across the entire rpm range.

The Innovate setup makes the 2.0L engine feel more like a V-6 than a flat-four, producing large amounts of low and midrange power instead of focusing solely on the top end. Performance gains are noticeable throughout the entire rpm range, most notably between 3,000 and 6,500 rpm. This sort of powerband also matches well with small displacement engines that lack torque, as well as solving the large "torque dip" experienced at 4,000 rpm with the production 2.0L engine. Focusing on street use, Innovate Motorsports Director Cort Charles told us, "The vehicle no longer feels underpowered." He added that the provided EcuTek map was calibrated to maintain CARB exemption but also to increase the powerband in the area where a street car will see the most time. Private third-party dyno testing by Innovate revealed on 91-octane gasoline over 40 percent torque gains at the wheels starting below 3,900 rpm and over 30 percent horsepower gains throughout the upper rpm range.

We managed to land an Innovate Supercharger kit to install on our Project FR-S to see firsthand how easy or difficult the install was as well both before and after performance gains on the dyno.

Following along with the provided directions, we began our Supercharger install by first removing the OEM intake manifold.

It was obvious when installing the supercharger that attention to detail was of upmost importance. The kit included specially constructed wiring extension harnesses that plug-in to factory connectors, precut vacuum hoses, black powdercoating, and a preassembled "bolt on and go" supercharger intake manifold assembly. In addition, the OEM airbox and MAF sensor location are retained to maintain OEM driving characteristics.

Innovate offers four types of kits with the most basic known as a Stage 1 "Tuner" non-intercooled kit. The Stage 1 CARB approved non-intercooled kit includes an EcuTek reflash and tuner file. The Innovate Stage 2 kits utilizes an air-to-water intercooler system, which consists of a front-mount radiator that runs coolant piping through the air gathered by the blower unit, cooling it without having to fill the snakelike piping of a front-mount air-to-air intercooler setup. The Innovate Stage 2 "Tuner" kit is comprised of the basic kit plus an intercooler minus EcuTek reflash while the top-of-the-line Stage 2 CARB-approved kit comes with both intercooler and reflash tools/recalibration map. Both Stage 1 kits are fully upgradable with the optional intercooler kit.

We outfitted out FR-S with the Stage 2 intercooler kit. The installation was straightforward and required installing the intercooler core, front-mount heat exchanger, hoses/reservoir and Bosch fluid pump. 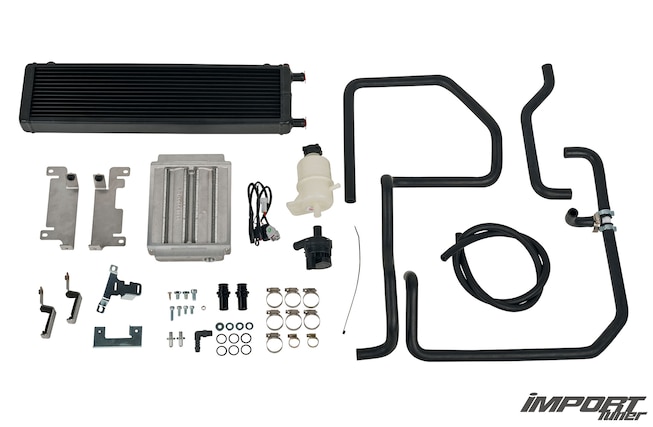 Prior to the supercharger installation, the car was equipped with a DC Sports DCS 2.5-inch diameter exhaust system, 2.5-inch cat delete pipe, over-pipe, and K&N panel filter. We strapped our FR-S on the dyno and spun the rollers to the tune of 173.9 hp and 138.3 lb-ft of torque. 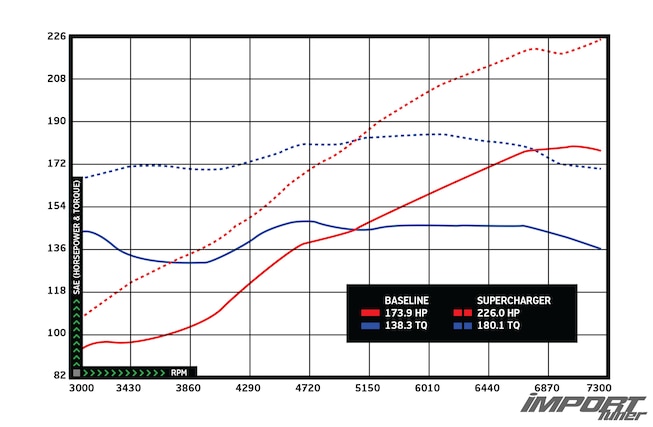 Evasive Motorsports uploaded the Innovate-provided EcuTek basemap flash before dyno testing the supercharger kit. A comparison of both before and after charts shows how significant our power gains increased with the supercharger with a peak gain of 52.1 hp and 41.8 lb-ft of torque, considering this was an off-the-shelf map and 8 psi of boost pressure. Our horsepower gains were noticeable throughout the entire powerband with a consistent gain of 45 hp and lb-ft of torque in the mid to high rpm range. Innovate recommends a custom tune to take advantage of the supercharger kit to extract additional horsepower, especially if you decide on installing an aftermarket header or additional custom parts. Innovate continues to push the envelope with plans to release additional go-fast goodies for their kit, including an upgraded supercharger pulley for more boost, so be on the lookout! In the end, was it worth supercharging our FR-S? Take a look at our dyno charts and weigh your options; it's just a matter of finding what fits your needs and your driving style. 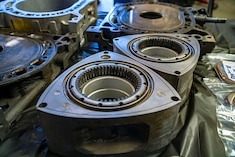