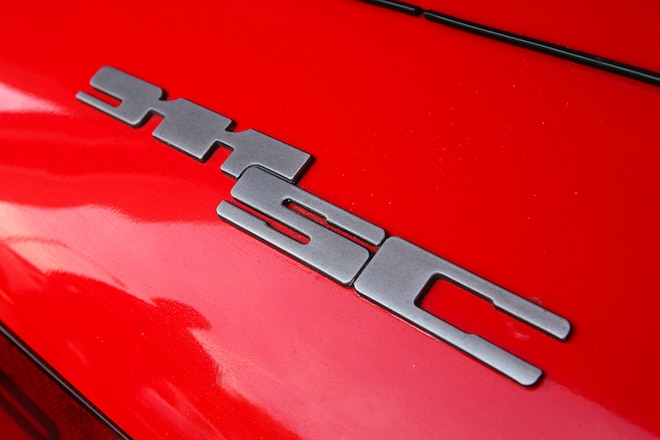 The "barn find" is a curious thing. As enthusiasts, stumbling across long-latent cool cars that have been forgotten by past generations represents a kind of jackpot, sort of like winning the lottery. The odds are long you'll find a decent score, especially if the elements have not been kind to the vehicle. But should the stars align, either by chance or by design, the payoff (figuratively and potentially literally) can be huge.

Ryan Hoegner from Eibach Springs was on a quest to find an air-cooled 911 project, something to supplement his already diverse but admittedly small stable of cars — namely a 1998 Acura Integra Type R and a 1964 Chevy Impala. The ITR represents his roots; Hoegner is a co-founder of the wildly successful Eibach Honda Meet, and has been part of the Southern California Honda scene for decades. The Impala satisfies his inner traditionalist, a relatively recent addition used exclusively for cruising.

The itch for a classic 911 flared up about a year ago, Hoegner looking to add a second sports car to his garage. For sure he had in mind an air-cooled specimen, but was very wary of transforming the Porsche into a "tuner" car like so many before (RWB, anyone?). He wants to "treat the car right," so with a clear picture in his mind he set to searching for his next project. 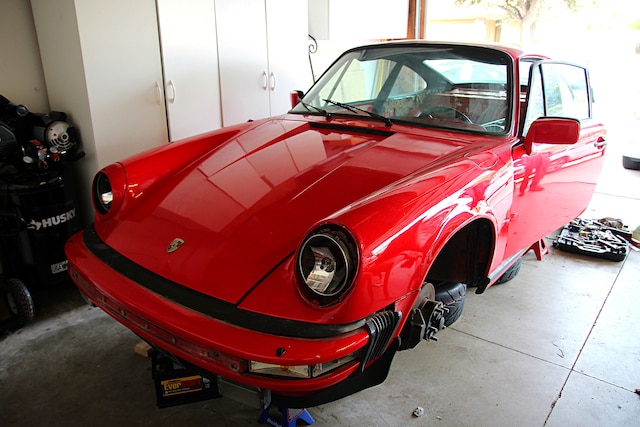 The lead on this 1982 911 SC came from the forums at PelicanParts.com. The person who found the car and ultimately bought it before Hoegner — parked and forgotten, for all intents and purposes — told him it had suffered some water damage at some point in the 1990s, while the engine hadn't been cranked since 2001, but otherwise the car should run. After deciding he didn't want to build the car after all, though, he went to the Pelican forums to gauge the value of the 911, and before anyone could answer Hoegner messaged the seller and asked for pictures of the car. Turns out it was exactly what Hoegner was looking for: Guards Red exterior with a black interior. 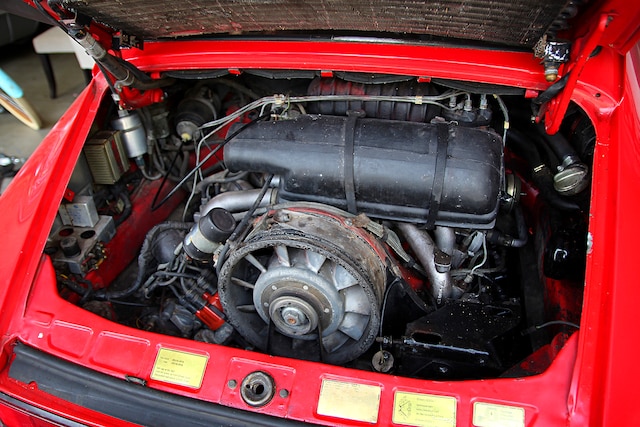 The seller sent a video of the engine turning to Hoegner — to prove it wasn't locked — and with that proof Hoegner made an offer, which the seller agreed to and shipped the Porsche out to California. Upon receipt of the 911, Hoegner put it up on jack stands in his garage and was successful in not only getting the mill to crank, but also getting it to run; it seems the gas tank was plugged and fuel pump caput, but after addressing both the old girl fired right up. 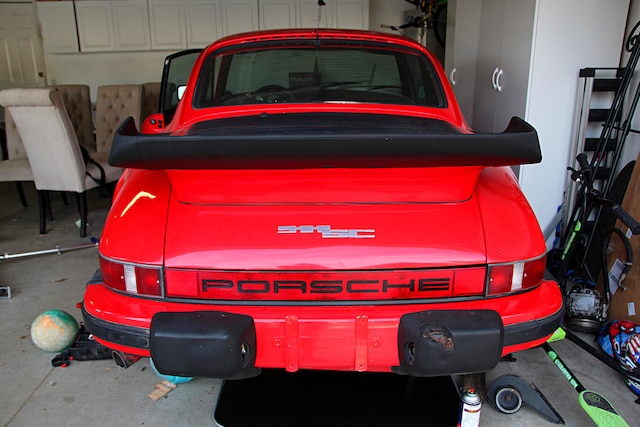 If you've gone through the photos, it's pretty obvious the aging sports car needs work. While there is thankfully no widespread serious rust, disrepair abounds, with the clearest sign of neglect being the leaves and acorns tucked away in the most humanly inaccessible parts of the Porsche. Hoegner says the goal is to rebuild the car and modernize it to a certain degree, but he really just wants it to be something fun to drive while also being reliable enough to take on a road trip up to northern California and back and not have to worry about it.

To those ends, he has a coilover suspension and brakes on the agenda. He also aims to have the engine torn down and rebuilt with a fuel injection update, individual throttle bodies, camshaft upgrade, AEM Infinity engine management system, and much more. And to facilitate the modifications, Hoegner commissioned Sleepers Speed Shop in Costa Mesa to take on the work.

Sleepers is pretty new to the Southern California Porsche community, having established in 2015, and is run by Len Higa. Some may recognize Higa's name, who like Hoegner is a SoCal import scene veteran, but more recently has received acclaim for his fabrication and vintage motorcycle restoration and customization skills; in addition to Sleepers, Higa operates Oni Motorworks where he works on cafe racers, and in 2013 was the Invited Builder at the Born Free Vintage Chopper & Classic Cycle Show, where he wowed show goers with his rebuilt ultra-rare 1969 Honda CB750 (you can check out a video interview with Higa here).

Hoegner trailered his new toy to Sleepers, where techs Danny Oda and Tommy Johnson got to work on dropping the flat-six engine and breaking it open. The process of pulling the mill and gearbox involves getting the 911 on a lift and disconnecting linkages, hoses, electrical connections, and ducting, as well as draining the engine of oil and removing the air box. After all that, the axles come out and rear stabilizer bar gets disconnected, and then with a scissor lift cart up underneath the engine and transmission, the guys remove the four mount bolts — one on each side of the trans and two in the rearmost corners of the engine compartment — and slowly raise the lift, allowing gravity (and a pry bar to get the rear bumper cover past the exhaust) to do most of the work. 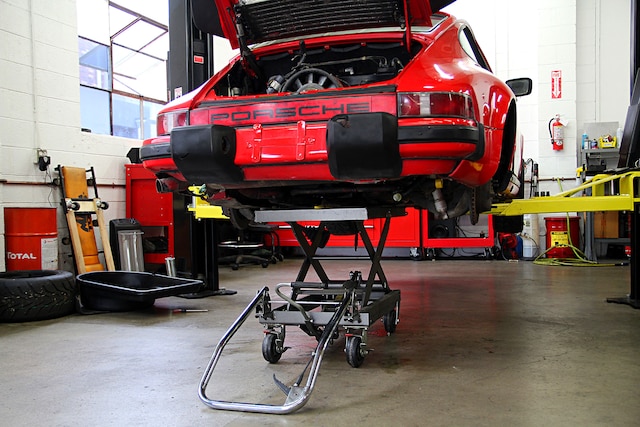 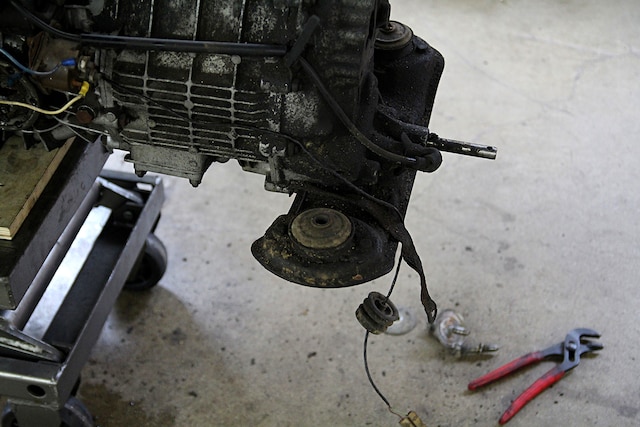 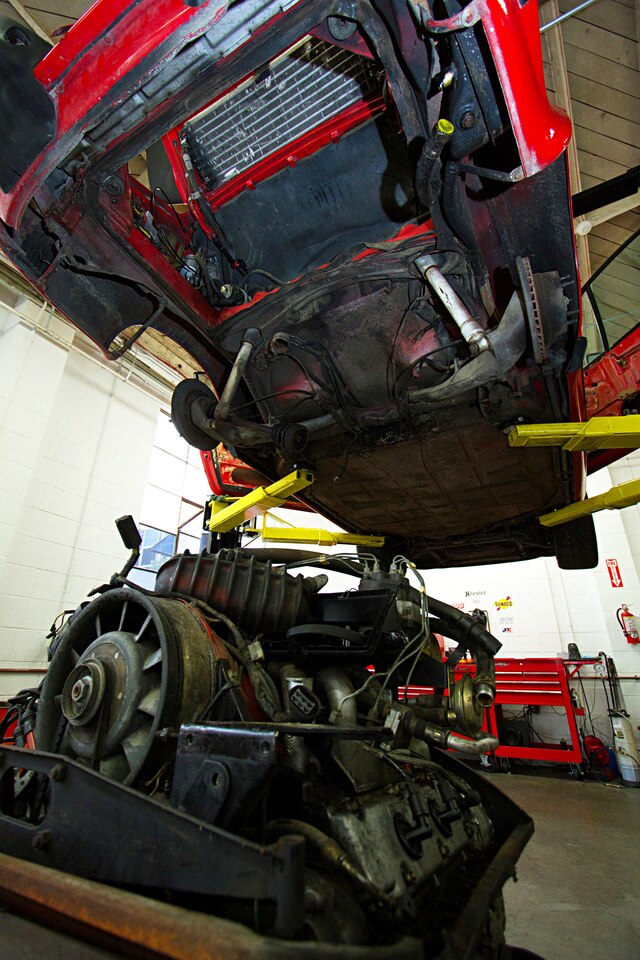 With the engine/trans on the cart, the crew unbolts one from the other. The power plant then goes on an engine stand and gets blasted with air to try to get as much of the surface dust and dead leaves and squirrel detritus off of it. 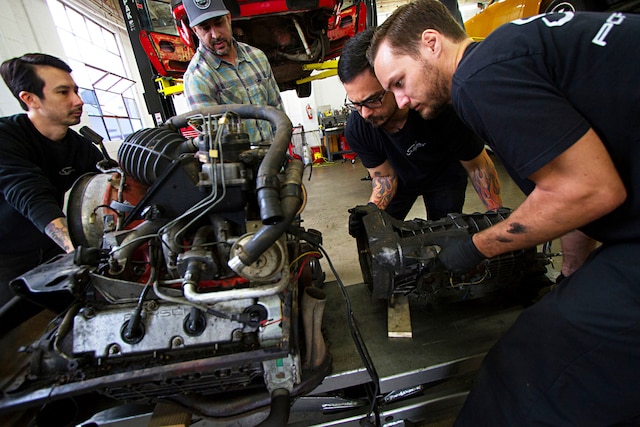 Time to strip this puppy down to the long block — the intake manifold is unbolted and bird's nest of fuel hard lines and ignition wires (plus distributor) pulled out. With those off, the shroud and fan are a breeze to remove, as is the oil cooler. It's around this point the guys hit the mother lode of rodent leftovers — acorn casings, droppings galore, and who knows what else. 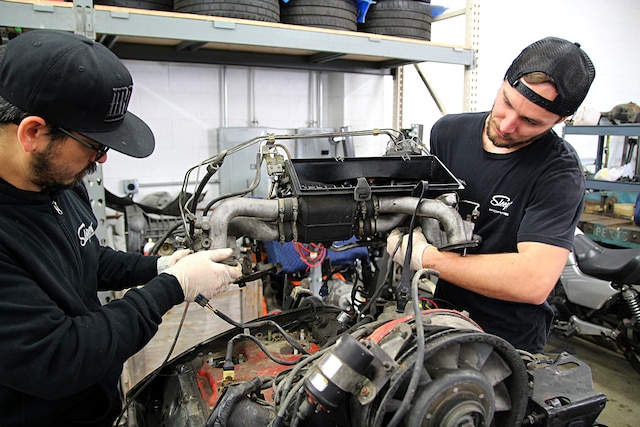 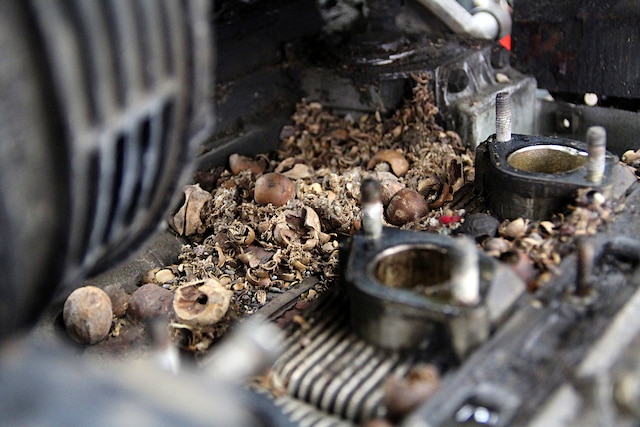 The exhaust system is targeted next — and turns out to be a bit more of a challenge than expected. Apparently a few of the exhaust bolts are super rusted and seized up, prompting the Sleepers guys to break out the deep cut band saw and reciprocating saw to start chopping away at the exhaust system fasteners. 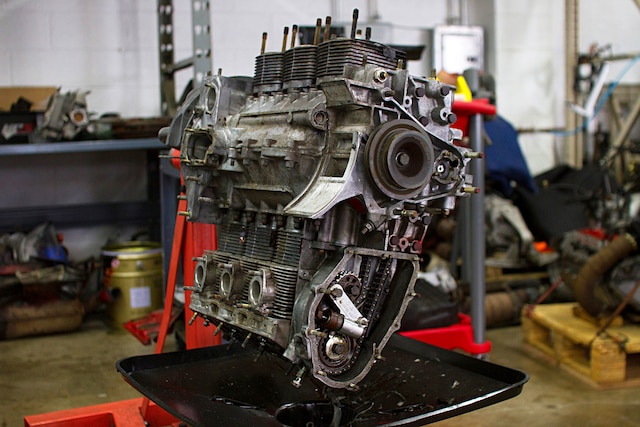 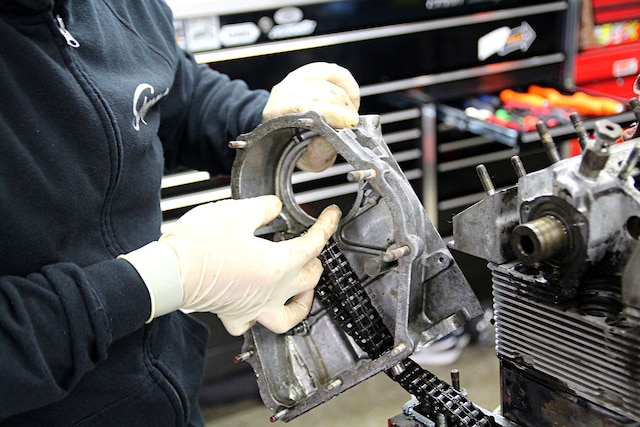 With just the long block left, Danny and Tommy pull off the valve covers (there's a top and bottom cover on each bank) and we get our first look at the inner workings of the engine, specifically the rocker arms. Then while one guy works on pulling off the heads, the other removes the crank pulley and starts taking apart the timing chain housing and removing the chain. 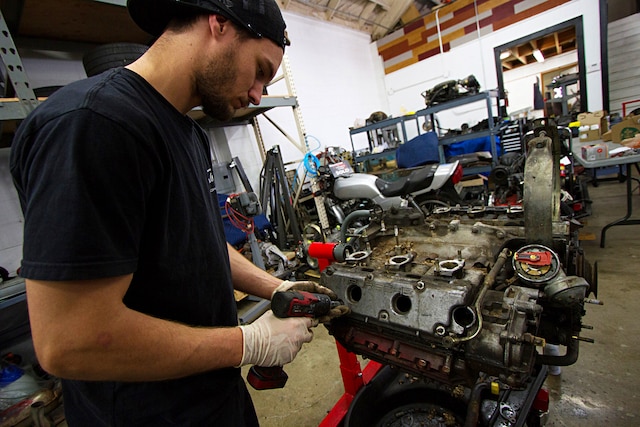 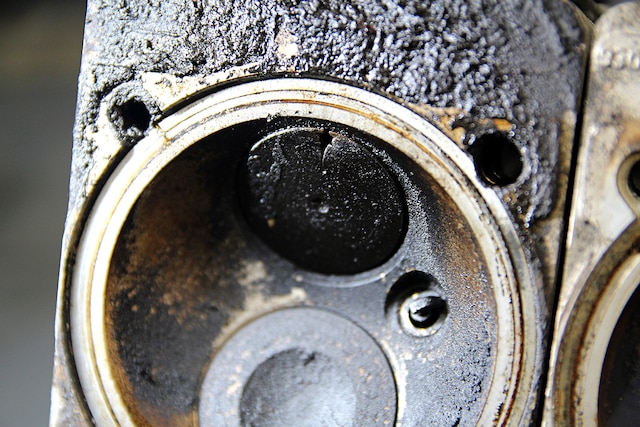 It's here we all begin to realize probably why this poor 911 was parked and forgotten. In one of the valves is a small triangular hole, not even a half inch in length. In the surrounding areas of the head and cylinder, you can clearly see carbon buildup left from the escaping gases.

With the heads off, the cylinders come out next, which in a couple instances required the guys to again turn to a cutting tool to remove unwilling bolts. Then the wrist pins and pistons are taken off, leaving just the short block left to crack open and gut. 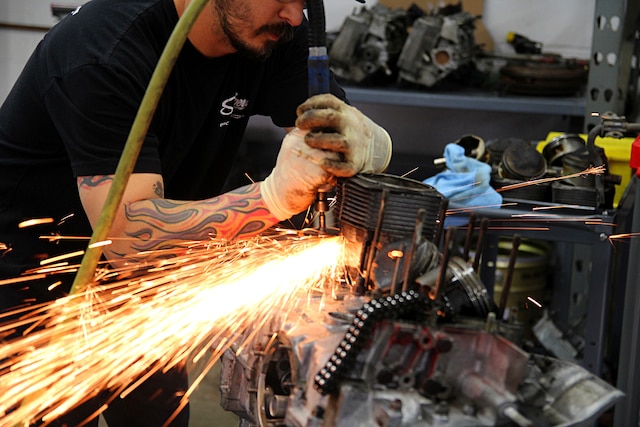 There are so-called through bolts on both halves of the block, as well as shorter bolts inside the timing chain housing as well as on the flywheel end of the engine. When all the hardware is out, the castings are split and we get our first look inside the crankcase. 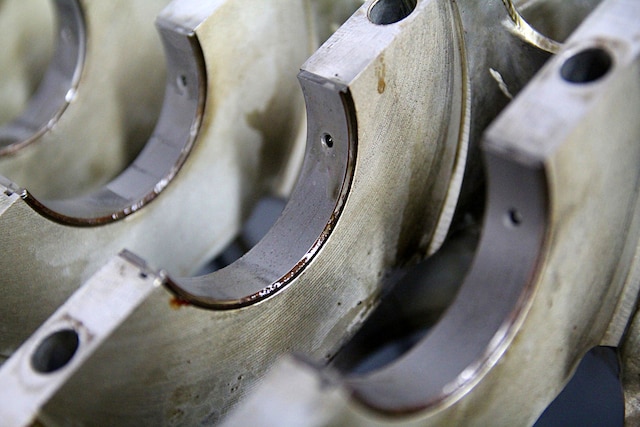 The internal dry sump oil pump and remaining parts of the rotating assembly look none the worse for wear, but the real tell is when the crankshaft and connecting rods come out. That's when we all get our first look at the crank bearings, and they looked great — no scoring, no unusual wear, everything seemed A-Okay.

We end our intro to this project here, with an engine rebuild on the horizon, as well as all the bits we mentioned before, and we're certain a refreshed interior is on the To-do list, too. Be on the lookout for the official Part 1 to this tale in the weeks ahead. 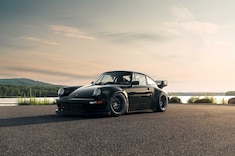 Scott Girondo doesn't like to follow the status quo. You have to if you want to do something crazy like take a 1982 Porsche 911 and stick a K20 motor into it