With all the parts in hand, S-Tec Motorsports and RAD Industries construct a mill made for war 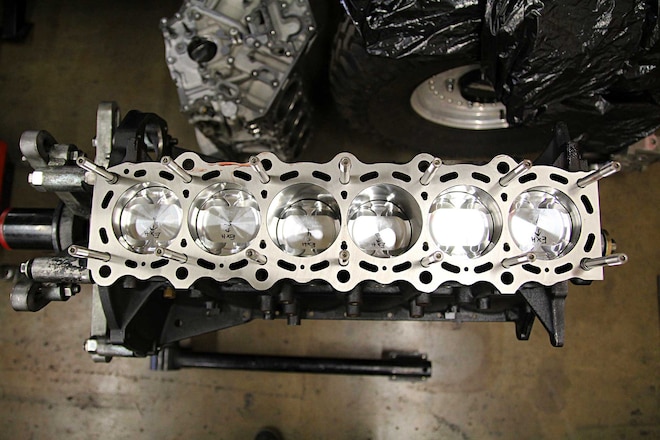 The road to 1,000 horsepower from pro drifter RAD Dan Burkett's Toyota 2JZ-GTE inline-6 engine ends here. We've shown you what goes into the rotating assembly guts of the beast; we've also shown you how the iron cylinder block and aluminum head were readied for extreme power. Now all that's left to do is put everything together.

The first part of that job takes us back to Orange, Calif., and S-Tec Motorsports, home of engine machinist and builder Sheldon Andry. It's there we find the rotating assembly—CP pistons, Carrillo connecting rods, and Brian Crower (BC) crankshaft—prepped and installed in the 2JZ block. We should note that before everything went together, it was all balanced. As others much smarter than us have said previously, the goal of balancing a rotating assembly is to make sure the crank counterweights offset the rotating and reciprocating forces created by the engine's pistons and rods. 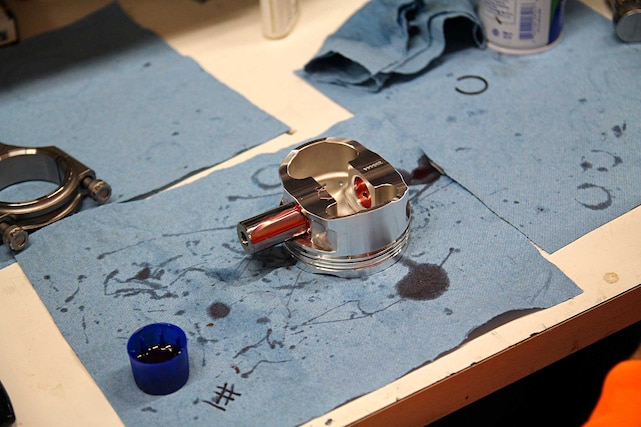 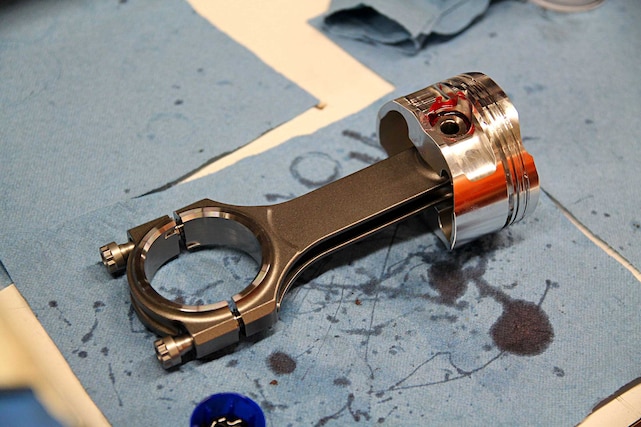 On the forged 2618 aluminum alloy 87mm pistons and Extreme Duty steel rods—and indeed all internal engine parts assembly—S-Tec uses an engine assembly lube, in this case Torco's MPZ. In the photos below, take a closer look at those beefy wrist pins—they're almost solid; like the rods, they were designed to handle upwards of 1,800 horsepower. After checking ring gap (and adjusting it if it needs it), the compression and oil rings are installed. Also, for the sake of both convenience and to avoid mix-ups, Andry and co. mark the crown of each piston with its cylinder number and orientation (in this case, an arrow is used to indicate the exhaust side of the engine). 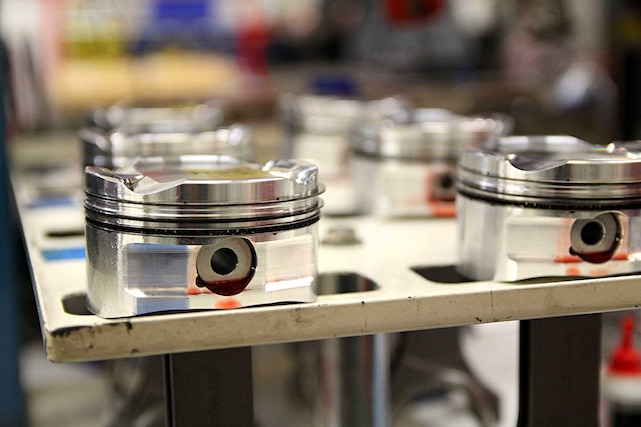 As we mentioned in Part 2, Dan is running the lighter version of the BC stroker crank for the 2JZ, which lengthens stroke from a stock 86mm to 94 with a steel billet crankshaft and increases engine displacement from 3.0 liters to 3.4. The longer stroke is good for more torque, but any more power or boost pressure beyond their targets would likely necessitate the heavier BC crank. Standard under-piston oil squirters cool the rotating assembly and keep it lubricated at high RPMs, while the bearings are from ACL's Race Series and have an extra 0.001-inch oil clearance over a STD-sized bearing. 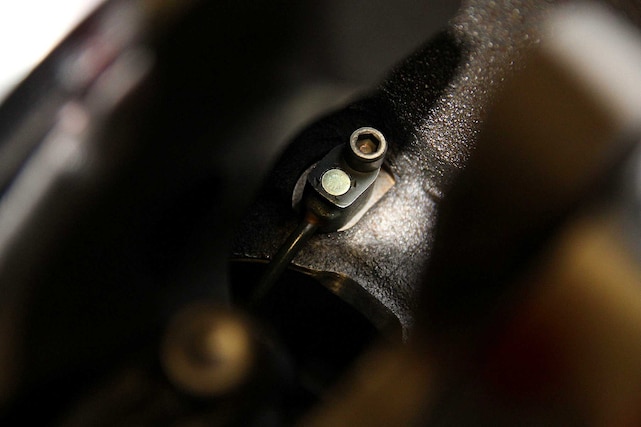 A series of seven Real Street Performance billet main caps keep the crank from shifting and ARP hardware is employed throughout the rotating assembly. ARP high-tensile strength L19 head studs—valued for their ability to torque to 100 lb.-ft.—are installed in the block in preparation for the cylinder head. 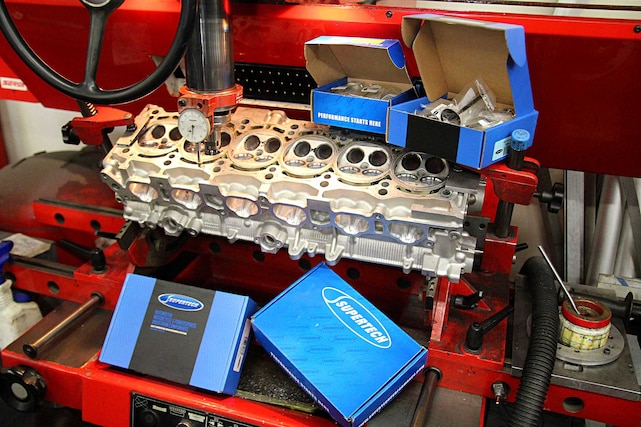 The aluminum head features four valves per cylinder and a pent-roof design, and the engine is considered non-interference, meaning under "normal" operating conditions the pistons do not travel into any area where the valves extend in the fully open position. If the 2JZ-GTE has any sort of shortcoming, it's in the head. Here, volumetric efficiency can be improved through porting, and more aggressive cams are almost always necessary with high-horsepower applications (like this one). 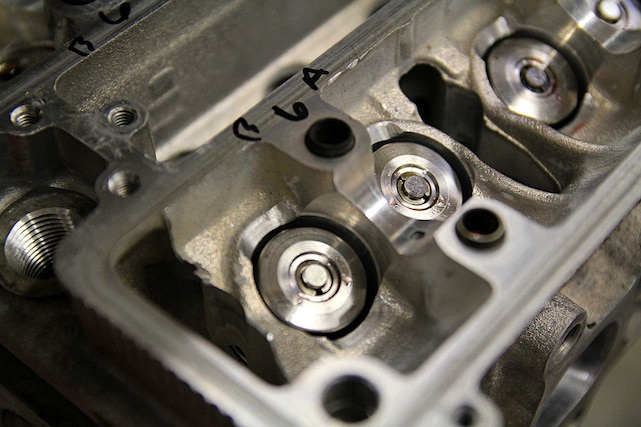 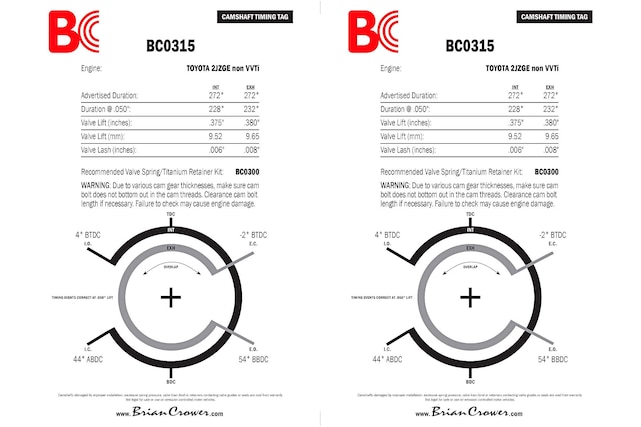 The valves were sourced from Supertech, with the intake valves made from heat-treated forged steel and the 1mm oversized exhaust valves sodium-filled Inconel. Camshafts are BC, the non-VVT-i variety for now, although in the future Dan plans to switch to VVT-i probably in 2019; if you look them up, these are the Stage 3 cams, which feature longer duration profile and added rpm potential, and are intended for fully built engines. The adjustable cam gears also come from Brian Crower, although during this build Andry used another brand's. 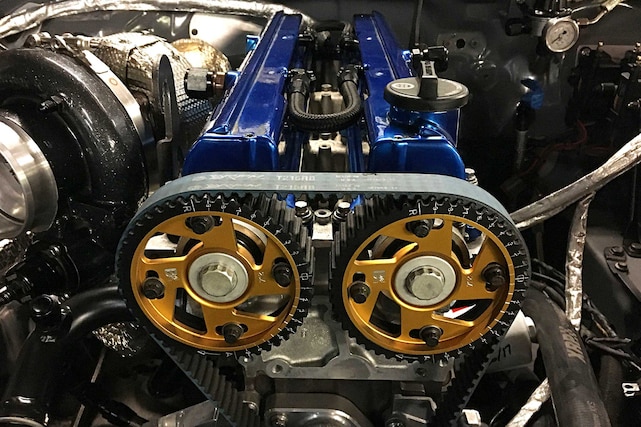 When the valvetrain is first assembled, the guys at S-Tec set an initial lash that will be adjusted to final specs when the head is ultimately bolted to the block and the Gates timing belt is run. Cam timing comes next, but not until the rotating assembly is in the 2J; oil pickup, two-piece pan, and pump are on; valvetrain and cams are in the head and the head is secured to the block; and the cam gears, belt tensioner, crankshaft gear, and timing belt are installed. Notably, this 2JZ runs essentially a stock oiling system, save for a slightly shimmed oil pump spring to net greater pressure. Additionally, the temperamental cast OEM bracket that secures the tensioner in place has been replaced with a billet one from Powerhouse Racing, but this part can be purchased at any number of 2JZ specialty parts retailers.

Once that's done, a giant degree wheel (the bigger the better!) is bolted to the end of the crank to do cam timing. Specs are matched to what the cam card—or camshaft-timing recommendations—from BC says; the card provides duration, lift, and lash parameters. 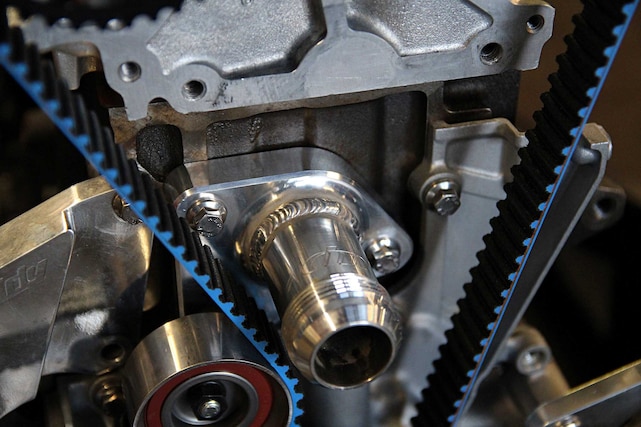 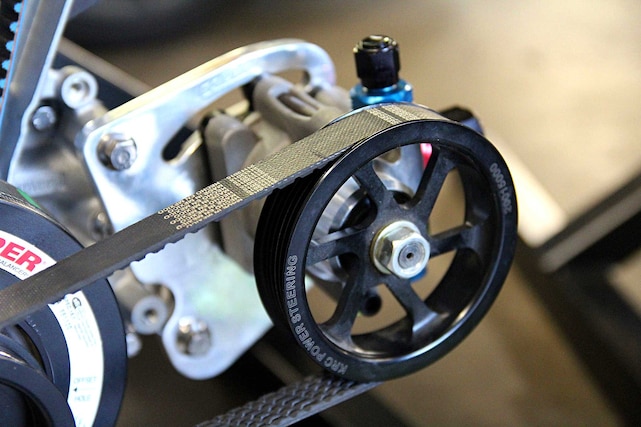 It's at this point the built inline-six is returned to RAD Industries in Santa Ana for Dan and his crew to finish up assembly. What's left is basically a raft of bolt-ons that—for the sake of accessibility—he installs before the motor is dropped in, parts like the Drift Motion billet water inlet that replaces the factory water pump (remember, Dan runs an electric water pump at the rear of his Supra so no need for the OE one); KRC power steering pump; alternator; and ATI Super Damper. None of these parts makes power, per se, but elements like the water inlet and Super Damper harmonic damper either help the engine run optimally and/or prevent power loss. 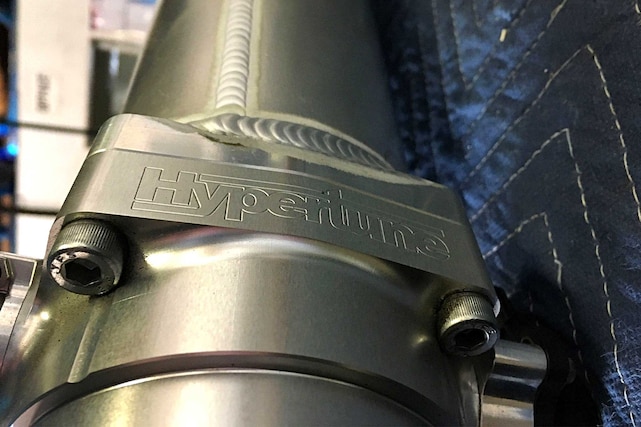 What does add a healthy dose of power is the turbo system, which begins with a DOC Race twin-scroll turbo manifold with provisions for dual external wastegates. Those so-called "Hyper-Gate45" gates come from Turbosmart, as does the setup's blow-off valve, and the snail building boost pressure for the system is the BorgWarner 9174 EFR, said to be the highest-flowing turbo in the EFR family. Dan has fabbed up plumbing for the charge, which eventually ends up passing through a Treadstone Performance Engineering front-mount intercooler and into a billet Hypertune throttle body and intake manifold. 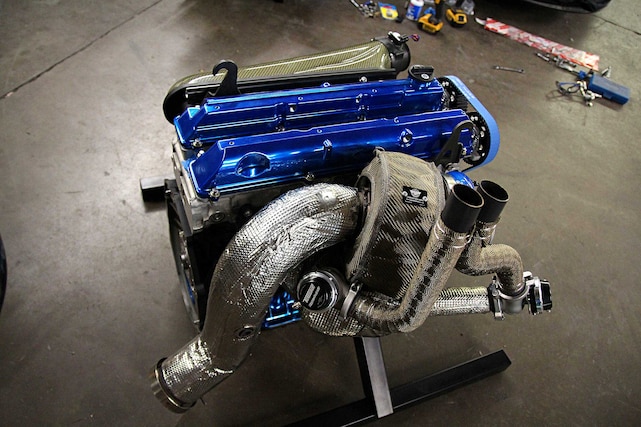 And there you have it. Wanna go 1,000 large from your 2JZ-GTE? There's the recipe, minus a few ignition and fueling details and of course facilitated by an expert, trustworthy engine builder and engine tuner, who are as important as having the right parts. We realize the 2018 season is about to get underway, and much of this was from last year's build, but with the few exceptions we've noted the engine is mostly the same this year. We should also add that while this power plant is for drifting, we expect the formula for doing this to a drag car or even street car can't be too different. Our sincerest thanks go out to RAD Industries for nearly complete transparency throughout this process and answering all of our stupid questions during the course of the assembly.