We Build A Street Terror Turbo H22 That Will Knock Your Socks Off, And It'll Do It On Pump Gas. 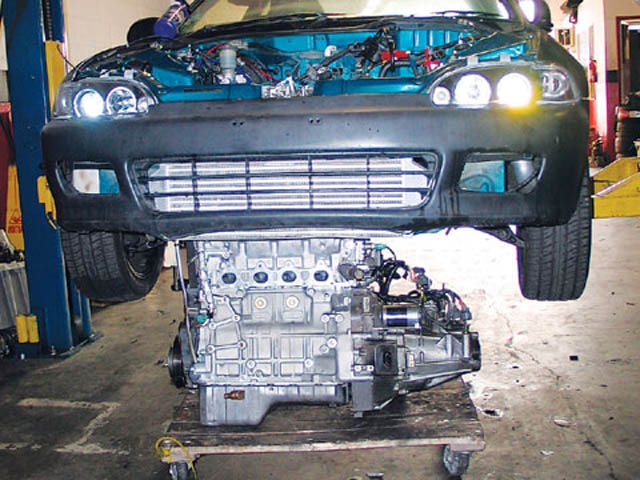 The H22 gets a lot of respect. Sure, it's big and bulky, and the damn FRM sleeves make rebuilds and sleeving go hand in hand. But when it comes down to it, the H22 is a hell of a bang-for-your-buck. Short of the K-series motors, the H22 has the most torque out of any Honda four-cylinder motor and backs it up with 200-plus hp. Bolt a turbo setup onto a stock H22 and it becomes a very potent machine. Build a turbo motor out of an H22 and it's unstoppable.

This particular H22 is a replacement for the stock H22 that used to be in this EJ1 coupe. The original Prelude motor was boosted also and over time started to have problems, ultimately resulting in an engine failure bad enough to necessitate a replacement. Eugene Castro of Pro Street Import took on the task of building the new motor into a streetable, powerful and, most importantly, bulletproof lump to go in the EJ1.

RS Machine head honcho Dave Chan had shop foreman Eddie Meza replace the fiber-reinforced metal sleeves with a set of RS sleeves to accommodate the new forged JE pistons. Once the motor was done the H22 spun the rollers to the tune of about 360 hp. That's nothing to scoff at considering this motor still has a completely stock head, is using 440cc injectors and is running pump gas. The bottom end itself would be good for gobs more power if it had the fuel system, and the head, to do it.

Props:
A special thanks goes out to Hondata for helping us out at the last minute. The Hondata S200 equipped ECU that was originally in the car was stolen from the Pro Street parking lot literally hours before the dyno session was supposed to start. Doug Macmillan from Hondata came to the rescue, within a few hours from receiving our call we had a replacement ECU and we were ready to go again.