The New Si Is Hiding More Power Than You Might Think... 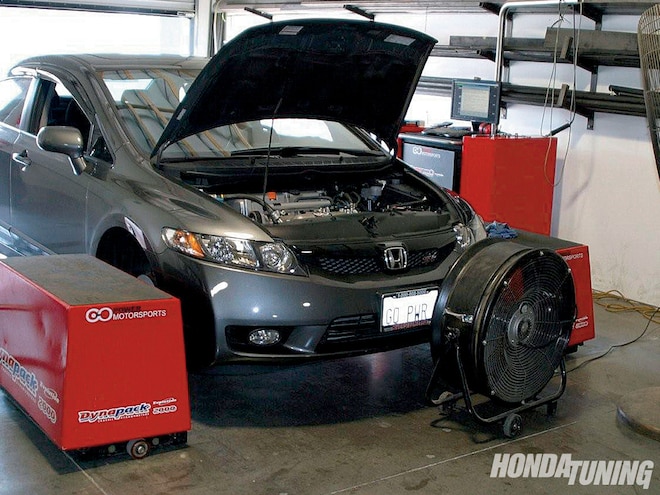 (Jeff Giovino has over 18 years of experience in the automotive performance industry. He played a leading role in championship-winning teams in NHRA, NHRA Sport Compact, and PSCA competition. As the Go Power R&D director, Giovino heads both the engine development and chassis fabrication departments.)

The Honda Civic Si has always been a popular tuner car because of the ease of modification and aftermarket support. From its earliest models, to the '88-'91 era that sparked a nation of loyal fans, the Si holds a special place in the hearts of every Honda enthusiast. In the past, tuners and aftermarket companies had no problems cracking the power safe, and stealing both horsepower and torque in order to improve on vehicles' performance. However, the latest offering ('06-'09) has proven thus far to be much more limited in the modifications department. The notorious drive-by-wire system, lack of engine management options, and overall aftermarket support have all been key components in turning many fans away from the newer chassis. However, as with anything Honda related, it's only a matter of time before Hondata figures out the ECU equation and offers something to cure the problem. FlashPro has recently hit the market and is making waves, as is the Cobb tuning Access Port system; both offering a way to dive into the factory ECU and make changes. Many may disagree, but in my opinion, with these new tools, we have by far the best Si to work with. You've got a car that comes with power steering, air conditioning, excellent comfort, great handling, two- and four-door options, and the best of all, it's K-powered. This means you have a great foundation to make a fun daily driver, aggressive track car, race car-whatever you're into. Currently, we've spent quite a bit of time focusing on the engine's output with the goal of making the most usable power while maintaining reliability and comfort. As with any VTEC engine, most of the power is going to be found on top, after the VTEC crossover lets loose. The '09 Si is equipped with a close ratio 6-speed transmission, and is powered by a K20Z3 engine rated at 197hp @ 7,900 RPM, and 139tq @ 6,100 RPM. All runs on the dyno before and after modifications were done in 4th gear on our Dynapack dyno. The iVTEC system can adjust the intake cam up to 50 degrees, and the car is claimed to produce 21/29 mpg, though I've personally achieved slightly better mileage. Our K20Z3 is also equipped with the coveted RBC intake manifold, which many tuners have used to achieve 300whp and above with Frankenstein builds.

Our test car had just over 200 miles on the clock, and netted peak numbers of 165wph at 7,980 RPM, and 127.2 at 6,325 RPM. To get started, we dug into the ECU. Hondata's new Flashpro system changes the VTEC crossover and raises the redline from 8,000 to 8,600 RPM. Though this change won't really increase power, it did a great job in smoothing out the graph, and simply makes for more fun behind the wheel. Our next upgrade was the Skunk2 header which features a 4-2-1 design, along with a custom Go Power Motorsports exhaust. Our system uses 2.5-inch piping, a resonator, and chambered muffler. The Hondata ECU upgrade and exhaust flow changes had an incredible impact on peak power output; over 20 hp at 8,500 RPM, and 16 ft-lbs of torque at 5,367 RPM, which is amazing for just a few minor changes. The sound is much louder than stock, but still quite bearable.

With such positive results from only minor tweaks, we designed a set of cams to compliment the newfound power. We saw great success with top-end power, but wanted to add some low-end grunt as well. Go Power Motorsport V1 cams were developed primarily for the 2,000-5,000 RPM range. These cams allow you to move 50 degrees, and are VTC safe. That means you can advance them with the FlashPro to get 50 degrees without any worry of striking the valves. Most times, a cam angle of 40+ will yield the best peak torque, while tapering down to the 20s in the top end will create a good horsepower number. Though Go Power does offer a drop-in cam that works with OEM valve springs and retainers, we wanted to make as much power as possible, and opted for the V1s. An '09 Si cam swap can be time consuming. Because it comes from the factory with single valve springs, when you convert to dual, you'll have to change the spring bases to support them. This requires removal of the valve stem seal to get the old base off and install the new one. Along with the new cams, we adjusted the ECU again using the FlashPro, and bolted-on the AEM CAI system. Because the Hondata system gives you the ability to tune cam angles, timing, fuel curves, VTEC crossover, etc, you have full control to fine tune the critical parameters. Because this is a flash program, you can't tune on the fly, but the flash itself only takes about 90 seconds to complete. The argument between CAI and short ram intake systems goes back and forth, but we feel that a cold air setup is hard to beat. Although a short ram might make more power than the OEM air-box with the hood open, much of that power is lost when the hood is closed, and the under-hood temperatures rise to the 145-155 range. With a CAI, the filter is outside the heat soak, and is able to continue allowing cool air to pass through. We chose the AEM cold air intake due to its build quality and reputation, but also because of its flow straightener option. This is important if you're running the car with a calibration based on MAF (mass air flow), which is how the stock computer reads. Many of the aftermarket intake systems that don't have vanes or a flow straightener could have problems with bogging or hesitation, as many of the Si owners have found out. While we are using the FlashPro, we have the ability to run a calibration based on MAF or MAP (manifold absolute pressure). For vehicles with aftermarket camshafts, tuning of the MAP system will usually work much better. Now with the AEM CAI system, the vanes are actually in a rubber adapter, so we removed the adapter and just used a standard boot so we don't have the vanes in the airflow path. Does this make a big difference? Not really, but having the option to run the system either way is a bonus with the AEM kit.

With all of our stages complete, we've uncovered an unbelievable amount of power using off-the-shelf bolt-on parts. The final dyno numbers are 219.1hp at 8,500 RPM, and 152.3tq at 6,000 RPM. This is an overall increase of over 50hp and 25 ft lbs of torque! The potential was always there, it just took some research along with the FlashPro adjustability to make it happen.

With the new power available, the car needed a slight suspension upgrade to keep up with the motor. Searching for a rear anti-sway bar, we contacted Eibach Springs for their rear kit. Installation time is about 30 minutes, and after the first few turns, you quickly realize this is one area that the Si was severely lacking. The Eibach unit adds a level of confidence under harsh cornering that the factory version could never come close to matching.

With K-swap popularity at an all time high in the U.S., more aftermarket support is expected to continue pouring in; many of the upgrades compatible with the newer Civic model. So Si owners, no more complaining! You've got Skunk2, AEM, Hondata, Go Power, and Eibach producing quality parts with real results, and plenty more on the way. 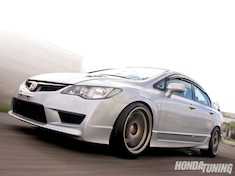 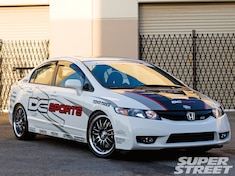 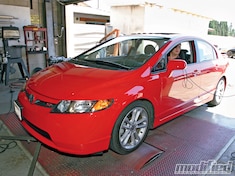 Hondata created a painless solution for tuners unwilling to hack and slash away at wiring harnesses to get their coveted K-Pro ECU to work with newer Honda engines. Check out the powergains we got from testing our FlashPro on a 2009 Honda Civic Si in Modified Magazine.