J-Series Engine Swaps - A J-Swap For Everything

From Shocker To Commonplace, The J Swap Is Here To Stay 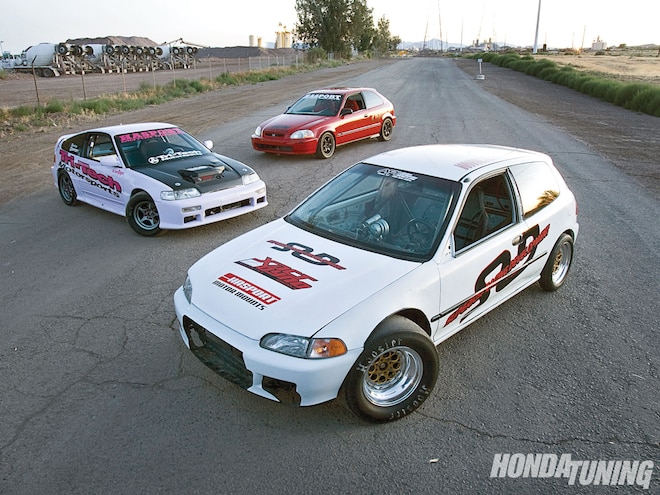 Report Two years ago at the annual Eibach meet, there was a really clean '92 VX with a surprise in the engine bay-the seemingly massive J-series V6-a full-blown J35 from the Odyssey minivan in fact. Tim Beadle of Arizona Performance Imports was one of the first to get it in and fully sorted out into a truly drivable car. Today, the masters at Hasport have taken that prototype, evolved it into its second generation, and have now created kits for the CRX, DC and EK chassis as well. 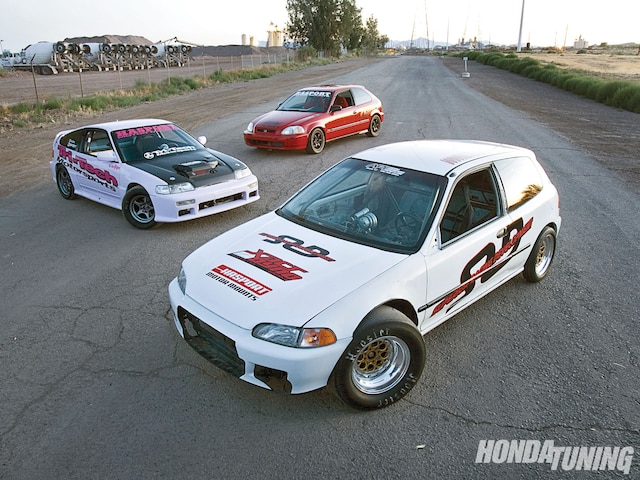 When you think about it, the J is nearly as common as the K is. It's in the Acura CL and TL, MDX, Honda Accord, Pilot, Ridgeline, and Odyssey. That's a lot of Honda V6s to be had. The downside is the manual transmission for the swap is a tough one to source. It's estimated that only five percent of all Accord and TL/CL production cars were equipped with a six-speed manual transmission. Expect engines to be around $600, but nearly double that for the transmission. And at this point, no one is working on how to use the automatic because it's not so good; to the point where Honda recalled thousands of them.

So if you want to try the 'no replacement for displacement' swap, what do you need? First, of course, is the engine. In my opinion, the best is the J35A4 from the '02-'04 Odyssey. This is because there are more of these engines than any other and it's the biggest. Others argue the J32A2 from the '01-'03 Acura CL/TL Type S is the way to go. However, these are much harder to find, so you'll pay a premium for them. On the bright side, this engine likes to rev and has great top end with 20 more hp than the J35A4.

Photo 5/14   |   It's completely caged but keeps the front half of the original interior with the rear shelled in. Obviously the driver is Nicole, but there are no track times as of yet since the swap is fresh and was the prototype for the Hasport kit.

One thing to stay away from are the really old engines, like the '98-'99 that have distributors. Nothing wrong with them, but when Honda took them to coil over plug, power went up nicely. Another thing you don't want is a Drive-by-wire (DBW) engine. To get this to run, you'll need an ECU, wire harness, and throttle from the original car. Finally, the Acura CL Type S had its own unique setup that doesn't appear anywhere else. The engine works, but the transmission has a unique case and isn't compatible with the Hasport kits-the same goes for its wire harness and ECU.

The rest of the swap is no more complicated than a standard K swap. Everything is turned around just like a K, and you'll need a new shifter box and cables. Ironically, these come super cheap from a 2003-up Accord V6. The mount kit from Hasport is under $600. The'02-'04 Odyssey ECUs work, and so do '99-'00 Acura TL units. The immobilizer needs to be dealt with, but most companies know what to do here. Also make sure to get the engine harness with your J swap. Companies like Arizona Performance Imports specialize in removing the stuff no longer needed like the auto trans, and then easily mate it to your existing car's cabin harness. API will ring you up for $450 to mate the two harnesses, remove the immobilizer, and include an OBD 2 port. This basically makes it a complete plug-in deal. 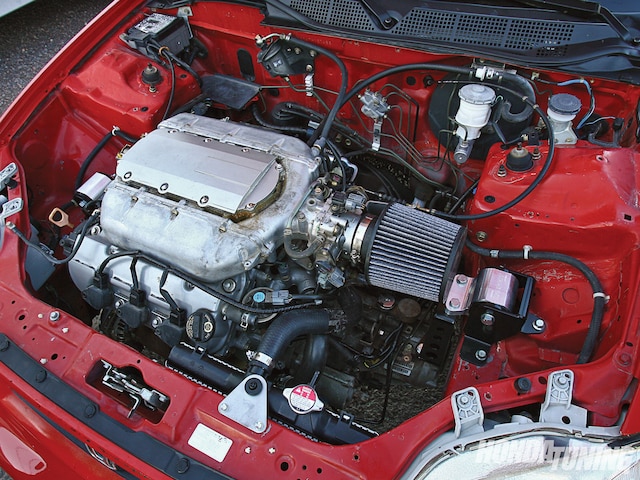 Photo 7/14   |   Hasport's red EK hatch is one old horse. If you're really sharp, you might recognize it as the car on the cover of Sport Compact Car many years ago when they ran a hybrid how-to for the K-swap into an EK. Today, here we are again, same car, a different swap. Their car has the J32A2 Type S engine with all stock stuff on it, even the exhaust manifolds.

All of the current chassis install the same with the exception of the CRX. This is because it's so small in there and because it has a cable operated clutch. The six-speed tranny used is hydraulic. Again, Hasport has the solution and the TriTech CRX sports it right there for all to see. Also, the axles required are different than the ones sold by Hasport, but are a combination of six Honda axles, if you feel like hunting them all down.

The CRX kit comes in just one flavor, unlike the other chassis. A notch on the rear subframe, the passenger headlight housing, and some trimming around the front suspension cross-link (just below the radiator) are required to wedge all that V6 in there. No Honda radiator will work either, but Full Race makes one for K swaps that happens to work on this as well.

The '92-'00 Civic, and '94-up Integra kits now have two versions of the swap kit to choose from. The original kit gives you maximum ground clearance, nearly stock. The trade-off here is that the intake manifold is pretty tall and you'll be cutting a good deal of your hood for clearance. The newest Hasport kit is a "flip kit." In the "up" position, it's lower than the original kit, and still requires hood trimming, but not nearly as much.

Photo 9/14   |   The Superior Racing Development / Xact Dyno '92 Civic hatch is a dedicated drag car. After burning up its turbo H22 on a 10-second pass, the car sat for a couple years. The J35A4 from an '03 Odyssey has brought new life to this local icon.

The flip, or super drop setting, puts the engine much lower and forward. Here the hood clears with no modification. Both the SRD/Xact hatch and the Hasport EK have their engines in this low setting. The big drag slicks on the hatch give it acceptable ground clearance, but the Hasport car has a wheel/tire/suspension setup typical of most cars and the oil pan is nearly on the ground! Clearance is two inches. This is really drag race only and even for that, Hasport has made a combo skid plate and alternator relocation kit for it.

If you decide to go with the J, you won't be let down. It will take a bit more work to get it done and the engine is heavier, but companies like Eibach are already considering making special springs to adjust for the added weight. And like every Honda engine, there's some power left on the table.

Photo 13/14   |   Set up for 9s, the chassis has it all-certified cage, completely stripped interior, 'skinny' rears, a dedicated Aeromotive fuel cell and A1000 pump, and even a traction bar out back (you can't call it a wheelie bar on a FWD car). The giant hole in the bumper is from the H22's intercooler, something the SRD/Xact guys say will soon be filled in again. That sounds like fun.

For instance, the J32 is a bored-out J30. The J35 is the same bore as the J32, but with more stroke. To get 260hp from the J32 Type S engine, Honda employed higher compression pistons, bigger cams, better heads, and a larger intake manifold. The J35 has all of that with the exception of the cams and pistons. We've already seen a J35 with all Type S internals doing just under 300whp with a factory ECU.

The exhaust on these engines is also ridiculously small. Remember, they're meant to be connected to automatic transmission to make torque. So having the rear three cylinders' exhaust pipe come toward the front and then do an abrupt 180 turn to join with the front three is no problem. But if you are looking for places to make power, then this is one of them. To date, there isn't a complete exhaust kit that eliminates the 180 but you can nearly do it yourself using the factory 3-1 pipes and going custom from there.

Engine management could also use help since the ECUs are designed for auto transmissions and 87 octane. But help is on the way. The TriTech CRX has an AEM box from a '99-'00 Civic (that is what matches the wire harness you'll be using) converted to run their J32. The SRD/Xact white hatch has a plug-and-play system utilizing an ECU from Adaptronic of Australia that retails for $1,150. Finally, the red Hasport car is on its way to AEM shortly for an official version of their ECU using the new Series 2 box.

So in the long term, it's clear the J has arrived, and will soon be mainstream. And rightfully so. This is another great engine from Honda that will keep the flag raised high for many more years to come. And though Hasport now makes a kit to clear the hood perfectly, nothing says power like that giant intake manifold popping out of your hood. That'll get you respect just sitting still.

J-Series Engine Swaps - A J-Swap For Everything
Photo /