The Search For More Power Begins 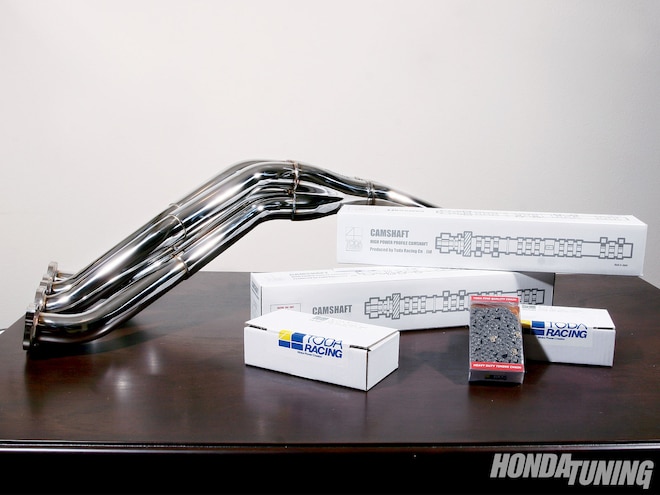 And so it begins
If you're a regular reader of Honda Tuning, you've no doubt noticed how much praise we've given the current-generation Si sedan and coupe. Though it carries a hefty amount of weight on its back, the '06-up Si is armed with a very capable chassis, a stout suspension, and a powerplant that literally begs for bolt-on performance. Because of this, along with the fact that the K swap has bombarded our market, the aftermarket has jumped at the opportunity to provide quality bolt-on parts, internals, boosted options, and everything else in between. 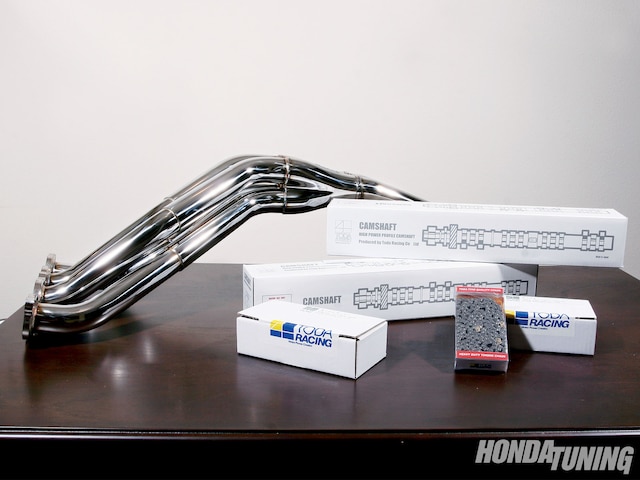 Mike Chang of Evasive Motorsports is well aware of how much potential his '08 Si has under the hood, and though he's been tempted in the past, he's waited until now to really exploit it. His car is in fact a street car that sees a number of track days throughout the year, landing him in the winner's circle on multiple occasions in the Street class-sporting nothing more than an exhaust, header, and Hondata reflash, along with a finely tuned suspension setup. Impressive to say the least, but Chang has been itching for a chance to increase the engine's output and become even more competitive on the road course. We discussed his goals for the car and after some very late night web research sessions, we felt like the following upgrades would work well together. Of course, jotting down a bunch of notes on paper is one thing; seeing the parts actually perform well together is something else entirely. That's why we'll be printing the dyno session results and track numbers in an upcoming issue, so stay tuned.

Here's a brief breakdown of what will be going into Mike Chang's '08 Si sedan.

Toda: A3 cams And high-performance valvesprings
When B-series VTEC motors finally found their way to U.S. dealerships, the technology was considered very advanced for the time. Most believed the intricate cam design was impossible to improve upon and, for a while, cam options were nonexistent. As research and development, along with trial and error, began to forge ahead, the industry soon found that major improvements could be found through various cam profiles. Toda became a major player in the world of cam development for the B-series and they haven't lost a step as the influx of K-series aftermarket goods have poured into our market. Offering six different cam options, from mild all the way up to their infamous "VTEC Killer" series, Toda has all facets of K-series tuning covered.

With this particular build, Chang wanted a cam that would make solid midrange and top-end power without sacrificing the car's manners on the street. We contacted Toda's official U.S. distributor, Missano Motorsports, and relayed our goals. Toda highly recommend their A3 spec camshafts and high-performance valvesprings. Every cam that Toda produces is created through the use of a super-advanced IBM CATIA CAD/CAM/CAE system, and includes rigorous real-world testing before it ever reaches your motor's head.

Toda: Timing Chain And Tensioner
When deciding how to protect their motor when upgrading the camshafts on the K20 motor, most usually reach for performance valvesprings and retainers. And that's good. However, the timing chain and tensioner are just as important, perhaps even more crucial in protecting the motor from failure. Looking for any weak links (no pun intended), Toda engineers found that by using a more precise manufacturing process significantly reduced edge burrs on their heavy-duty timing chain, which in turn, reduces friction and provides a much smoother operation, even under stress. Each individual plate contains an increased surface area that allows a larger opening and pin diameter, two factors that help the Toda piece reduce stretching of the chain under constant abuse by as much as 35 percent.

Of course, the timing chain upgrade alone isn't going to carry the entire load when dealing with aftermarket cams. If the tensioner were to give out, the results could be catastrophic. To match their heavy-duty timing chain, Toda created their own tensioner with a much-improved compensator, adding yet another layer of security against engine damage during high-rpm track days.

BluePrint Racing: Valves, Retainers, Head Prep
With the various head components gathered, we needed a trustworthy shop to not only install the new Toda goodies, but also prep the head for duty. We contacted Ben at BluePrint Racing in South El Monte, CA, and asked if he and his crew would be willing to give us a hand. Looking at our cam specs and other upgrades, Ben suggested a set of BluePrint Racing's very own keepers and titanium retainers. After completely disassembling the head, BluePrint Racing performed an ultra-precise competition valve job, complete with their black nitrate, flat-face valves; bronze valveguides; and Viton valve seals. In no time flat, the head was reassembled, looking better than new and ready for pickup.

Photo 6/12   |   The Toda heavy-duty timing chain features more strength than the OEM version, and if you look closely, you can see a few links that feature a special color to make proper installation that much easier.

Skunk2: Exhaust Manifold
Chang's current exhaust setup consisted of a Vibrant header and 70mm exhaust system, along with a test pipe. Although the Vibrant header made positive gains during the dyno session performed by our sister magazine Import Tuner a few years ago, we knew that a larger set of primaries would be needed to support the newly outfitted head. Skunk2 has been busy with the K-series motor-really busy. They offer a full line of K-series-related performance goods, including their T-304 stainless steel header, complete with a hearty CNC-machined flange for proper sealing and longevity. There's a nice variety of headers on the market currently, but the Skunk2 unit has proven itself on a number of track cars and dyno days. The one-piece design bolts right up, though we did have to cut and extend the wiring harness so the 02 sensor would reach the bung. A very simple procedure that doesn't take more than five minutes, and is well worth the extra horsepower and torque we should be picking up with this beauty.

Hondata: FlashPro
The Si had previously received a reflash from Hondata to go along with the intake and exhaust install, but with new bolt-on and valvetrain changes, a custom tune was definitely going to be necessary. Once again the Hondata geniuses were called into action. Doug MacMillan was willing to offer up some of his very limited time and a FlashPro unit to fine-tune the Si. While most only look toward FlashPro as a means of gaining horsepower, there's another aspect to the importance of this little gem, and that's driveability. With full control over the car's ECU, FlashPro can eliminate things like the dreaded "rev-hang" that plagues the Si, along with fuel and timing adjustments that will smooth out the power delivery and can completely transform your driving experience. As the majority of our readers already know; all of the best parts in the world don't mean much if you don't have proper tuning to put those pieces together.

Honda OEM: Intake, Intake Manifold, Modified Throttle Body
To make the most of the cam and header swap, Chang picked up an RRC (Civic Type R) intake manifold and had it port-matched to a bored out OEM throttle body (65mm). Wanting to maintain a stealthy appearance, the factory airbox is still being utilized, but is fed through a T1R snorkel that runs down into the driver-side grille of the JDM front end. In fact, once the hood is popped, unless you peek around to the rear of the engine bay and see the header, the only clue that the engine isn't completely stock is the short silicone hose connecting the factory intake to the throttle body.

Will Any Of This Make A Noticeable Difference?
The potential to make solid power with the K-series motor is great, but as with any motor, the right combination of parts is essential to its final output. Our goal is to improve power and torque, specifically torque in the 5,000 to 6,500-rpm range for track days. This is going to be done with a completely stock bottom end, and an unported head. We spent quite a bit of time weighing the pros and cons of a number of aftermarket bolt-on goodies for the Si, and feel that this combination will indeed make power. Stay tuned as we reveal the dyno results and lap times in the next issue. 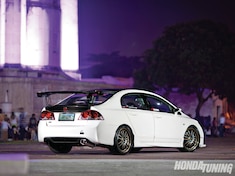 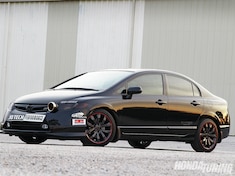 Jorge Otero, owner of JoTech Performance, understands the feelings shared between man and machine when building a car. All of the trials and tribulations are worth it when you hear the car start up. That is also true for Jorge's 2008 Honda Civic Si. Keep reading to get the full story behind Jorge Otero and his honda. - Honda Tuning Magazine 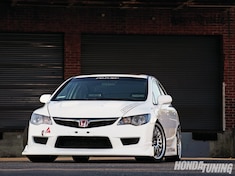 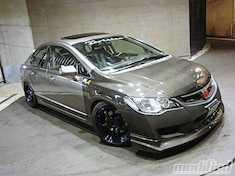 Check out Tom Tocino’s 2008 Honda Civic Si, his styling choices with his Civic are pretty cool, in our minds. We like the all-carbon front end, the gray paint looks very subtle with all the accent pieces and the wheel choice adds a nice little bit of flair. Also, having the CTR conversion done front and back isn’t something you see every day. - Modified Magazine 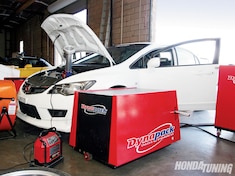 Check out the latest update to our Project Si in this update we tested the 2008 Honda Civic Si Sedan on the dyno and saw what kind of numbers it could make. - Honda Tuning Magazine