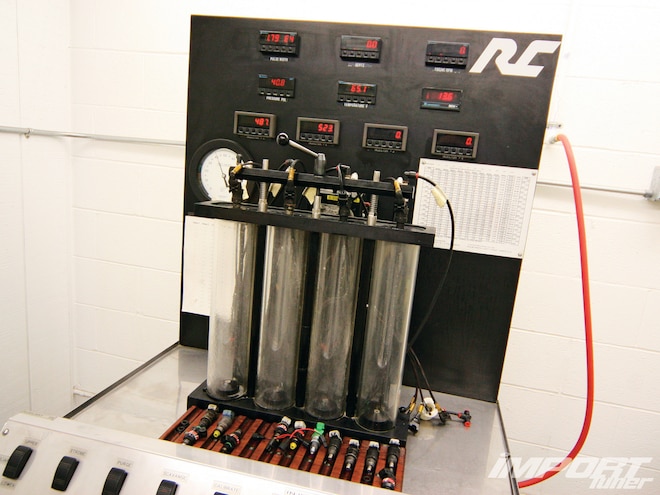 We’ve tested a bunch of pour-in fuel additives in Fact or Fiction over the years. Can you really blame us? With all their promises of horsepower and torque increases, detonation resistance, and improved fuel economy for the cost of just a few bucks and as many seconds of labor, they seem too good to be true. And so far, our testing has confirmed the associated second part to that famous saying we all know.

But these products’ proponents (largely, their manufacturers), point out that all the attractive benefits listed above are merely by-products of one key benefit: fuel system cleaning. If dirty fuel injectors were the culprit to our power/detonation/mpg woes, they’d argue, pouring a few bucks of their stuff in our tank would’ve made it all right as rain. But if our injectors were clean to begin with, they shouldn’t be held responsible for all those times when pigs didn’t fly. In response, we kick it up a notch.

Think of fuel injectors as the beating heart of the power-making process. By opening and closing very tiny valves very rapidly at every operational moment of their lives, they regulate the amount of fuel introduced into combustion. The stock configuration of nearly every engine positions them near intake valves, exposing them to blow-by heat, carbon, and oil on a regular basis. If even the smallest amount of these residuals adheres to the fuel injectors, bad things will happen. 200,000 miles on an average modern-day Japanese engine turning a 3,000-rpm average at a 32-mph average lifetime vehicle speed means about 562,500,000 lifetime actuations per fuel injector. The chances that dirt will impede their performance at one time or another is astronomically high, and get even better when dealing with the increased heat and dirty charge piping of forcibly induced engines, and best yet with hot, rich, dirty, aging turbocharged rotaries. Fortunately for our purposes this month, we have a 210K-mile ’94 Acura Integra and 190K-mile Turbo-II FC RX-7 in our garage, and the fuel-system diagnosticians at RC Engineering right down the street.

Since most common fuel injector deposits are byproducts of combustion, it’s easy to believe that a simple petroleum distillate liquid cleaning agent might be all that’s needed to dissolve them. To test whether this hypothetical could pan out in the real world, we developed a three-pronged approach:

1. Perform a baseline flow pattern and capacity test of the injectors in our Integra and RX-7 test cars.

2. Apply a bottle of a highly regarded pour-in fuel injector cleaner to each test vehicle, use as directed, and re-test for changes in injector performance.

3. Have each car’s injectors professionally serviced by RC Engineering and compare their final performance figures.

This is RC Engineering’s injector performance testing machine. Injectors are engraved with numbers identifying them, and placed above graduated cylinders and run through any number of tests using a low-volatility liquid with the same specific gravity as gasoline, controlled by a module similar to a stand-alone ECU. Ours were tested at 100 percent duty cycle (wide open) at each stage, so we could compare the amount of liquid each flowed in one minute to their cc/min ratings. Our Integra’s baseline numbers are below:

Our tester, John Park, a resident RC Engineer of 18 years, was surprised by their consistency given their age and mileage. "This is going to be difficult to improve upon," he said.

Hitting popular forums, Yahoo Answers, and Ask.com, we decided on one particular brand as the subject pour-in fuel injector cleaner of choice. We’ll refrain from publishing its identity for fear of defamation lawsuits, but you can probably figure out which brand it is by memorizing the claims on its back label.

We applied the product to a full tank of premium pump gas as directed, and ran the entire contents through with the injectors reinstalled. We also did the same to the FC, which missed its appointment for baseline testing due to unrelated circumstances—in its case, we’d just have to wait for final cleaning of the injectors to see if the pour-in product left room for improvement.

Back at RC a few days later, each car’s injectors were put through the baseline testing procedure again, the RX-7’s for the first time:

The capacity and flow pattern of the Integra’s fuel injectors hadn’t changed at all. This was the first time we’d gotten to see just how bad our FC injectors were—and they were pretty crappy, even after the use of a pour-in fuel injector cleaner.

It was finally time for RC to work their magic, primarily in three different steps: an ultra-sonic cleansing bath, in which the injectors are submerged and actuated in a concentrated solvent and subjected to ultra-sonic vibration, followed by a high-pressure reverse-flow solvent stream, and ending with a media blasting to the injectors’ bodies and the replacement of all seals, O-rings, and nozzle covers.

The injectors’ appearance after the process is night and day compared to their baseline state.

As John explained to us, the problem with pour-in fuel injector cleaners can be two-fold. Effective injector cleaning requires stronger chemicals than can legally be sold in stores for use with emissions-controlled vehicles, and stubborn deposits simply must be dealt with by force—and more of it than an engine’s fuel system can provide, even at 100 percent duty cycle. "Even the injectors we saw today would be passable in most cases, for everyday driving," he admits. "But in high-performance builds, especially in high-strung turbo applications and engines tuned for pump gas, clean fuel injectors are hugely, hugely important."