How To Cheat An Emissions Test 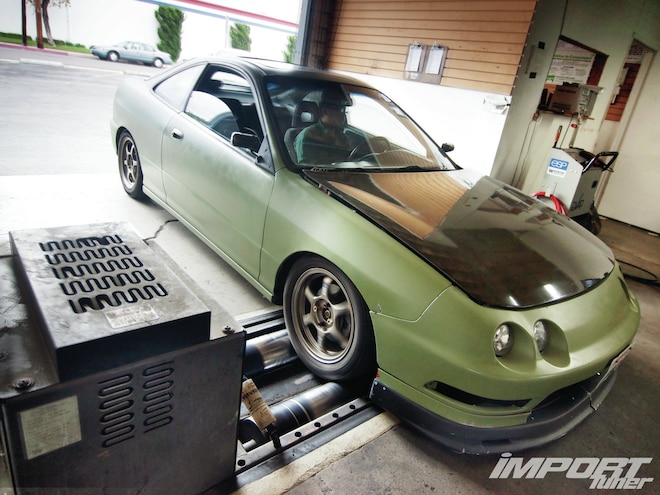 In keeping with last month’s theme of testing multiple products rumored to have the same effect on vehicle performance, we’ve got our sights set on emissions this time around.

The Claim: These will help you do it.

Vehicles in most of the country are mandated by law to periodically undergo testing that ensures their output of harmful emissions is below a threshold some bureaucrat deems safe for an area. Those of you in less densely populated areas usually have more lenient emissions requirements. Some have none at all. Those of us in Cali have “Smog”. Not only do modified vehicles here have to prove that all their aftermarket parts are CARB–exempt (status manufacturers gain only by forking over shitloads of cash to some other government bureau), but they must meet the world’s most stringent set of emissions requirements to be driven on public roads.

We all know that “smog” is a portmanteau for the toxic smoke/fog mix plaguing densely populated areas like greater Los Angeles. What you might not know is that the bulk of it is formed when certain chemical byproducts of internal combustion rise into the atmosphere and combine with sunlight. Ever see a photo of the L.A. skyline surrounded by a brown haze? That’s smog, and it gets its color from nitrogen oxides (or NOx) predominantly produced by motor vehicles. Cali’s smog testing sets minimum part-per-million levels of four smog-attributing chemicals emitted by motor vehicles: NOx, carbon dioxide (CO2), carbon monoxide (CO), and hydrocarbons (HC—simply, unburned fuel). Testing this month commenced in a top-secret smog facility in Orange County, CA, and involved monitoring the emissions output of our DC2 while it underwent the following changes, all rumored to impact results.

Before diving into testing, there are two points to mind. First, that the levels of the above four chemicals a car outputs is one huge balancing act. HCs increase in rich conditions, or conditions so lean that an incomplete combustion occurs. Since CO rises when there’s not enough O2 to convert carbon to CO2, CO levels will seemingly rise alongside HCs in times of rich A/F ratios or incomplete burn. NOx rises when temperatures do, so expect these numbers to go up with compression, overly advanced ignition timing, temperature, or lean A/F ratios. Lowering emissions of all four chemicals requires a near-perfect tune and lots of specialized equipment to recirculate exhaust gas, inject clean air into catalytic converters to speed light-off, and all sorts of other wacky stuff. You’ll also see O2 listed. It should always be low. Increases in O2 usually signify an exhaust leak. 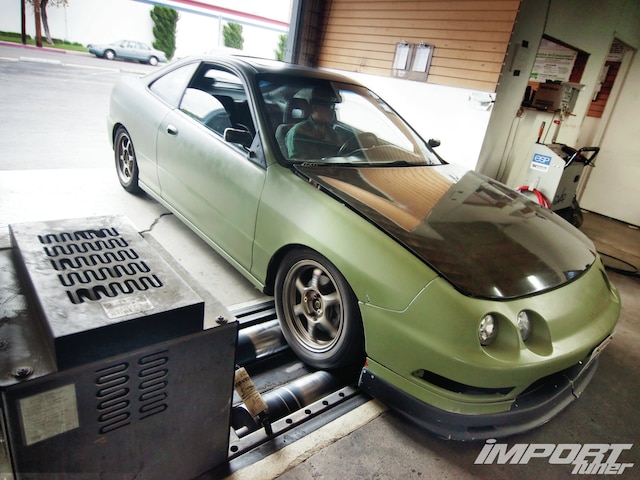 The second point to mind is that all of our DC2’s OBD-1 emissions equipment (catalytic converter, charcoal canister, PCV valve, and more) was installed and operational throughout testing, but its ECU had been Crome tuned for leaner air/fuel ratios to save fuel during the daily commute—sending its NOx emissions through the roof. California state smog testing outlines emissions thresholds for each of the above four gasses at varying vehicle wheel speeds: 0 mph (idle), 15 mph, and 25 mph. For brevity’s sake, we tested only at 25 mph.

The first test commenced after the car had been sitting, parked with its engine off, for about 15 minutes—or the amount of time you could wait for another customer to finish testing before you got your turn. We’ve heard one forum poster reason that “since cooler engines make more power, they should burn more efficiently, which would decrease emissions,” or something like that. Wrong. Our tester, Thomas (who will otherwise remain anonymous), suggests “always testing a car after letting it idle to its full temperature. If a smog certifier tests your car cool or cold, it will probably fail.”

Testing recommenced after we employed an old trick: “heat the hell out of the cat,” by driving the car on the dyno for a few minutes at an elevated RPM and heavy throttle (simultaneously gassing and braking to keep speed constant), to heat up its catalytic converter for the best possible emissions-burning performance. The result? Emissions decreased all around. Even our O2 output decreased—we think because a small exhaust leak closed up once exhaust gaskets/components heated and swelled.

Another old “trick” to passing emissions: Add two bottles of ISO Heet to a quarter-tank of gas for a “big” improvement. Very little more than straight rubbing alcohol, ISO Heet is sold as a fuel-line freeze inhibitor, and the theory is that since alcohol burns cleaner, mixing it with gas should have the same effect. It worked marginally in our testing, with the exception of our CO output—our cat might’ve cooled a bit from our previous run.

Finally, with the Heet still in the tank, we closed out testing with one method of improving emissions most everyone agrees on: retarding ignition timing. Some will argue that by doing so, and giving an engine less time to effectively burn its air/fuel mixture, one risks increasing HC and CO. Going from 19 degrees before top dead center (BTDC) to 9 degrees BTDC for our final test, we saw improvements across the board.

While the methods listed above did decrease emissions, they brought numbers down nowhere near as low as swapping out our chipped ECU for a stock one (those numbers are available on importtuner.com). As Thomas advises, “The easiest way to deal with smog is to make sure all of your car’s smog equipment is in place and operational, and that your engine is in a good state of tune.” But, owning a modded EVO IX and B-swapped Civic hatch, he knows it’s not always that easy. “E85-converted cars can be tuned to run way cleaner,” he assures, “and they can make way more power than they can on pump gas.” Going for mild power increases? Play by the rules. Large increases? Take advantage of what you can, before some bureaucrat outlaws it.

How To Cheat An Emissions Test
Photo /