Home  |  How To  |  Engine  |  Laminova Heat Exchanger - If You Can't Take the Heat ... Find A Better Heat Exchanger?
Subscribe to the Free 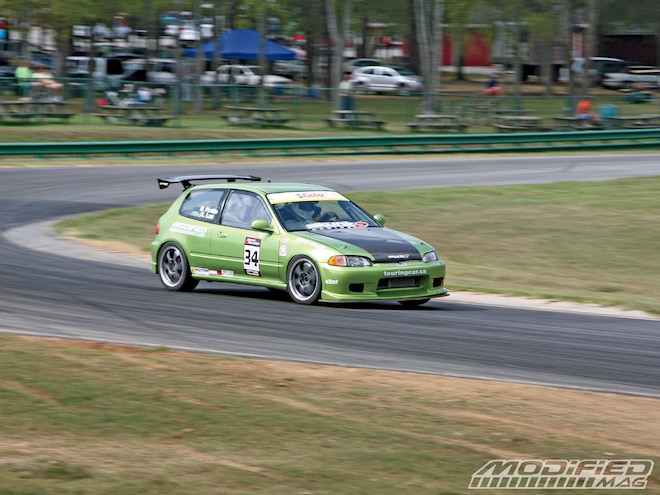 Since my beloved EG Honda Civic hatchback is now too old for the Touring Car series I've been racing it in (which has a 13-year-old chassis rule), I decided to take off the gloves and convert it into an Unlimited class time attack machine. With Moton triple-adjustable dampers, a lightweight chassis and a solid aero package, the only way to make my 250-whp, K24-powered EG significantly faster would be to seriously bump up horsepower. 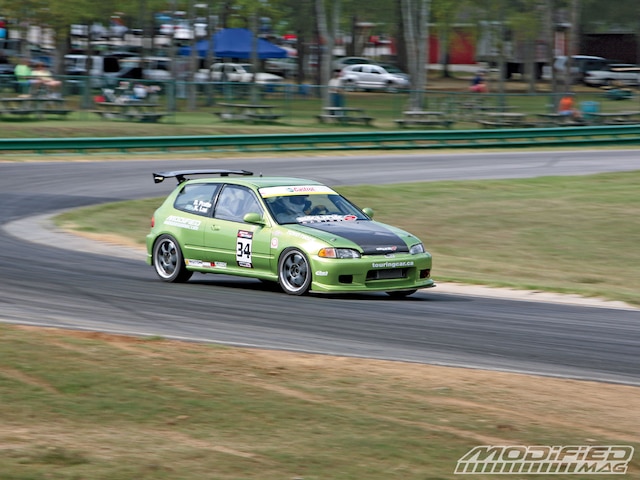 Having researched all the forced induction options out there, I settled on a Kraftwerks K-Swap kit using a C38 Rotrex supecharger. As I covered in a previous Tech Talk column (May '09), Rotrex superchargers are a unique approach to belt-driven forced induction, using a planetary drive system that spins the impeller to speeds 2-3 times that of traditional centrifugal superchargers. As a result, Rotrex chargers are extremely efficient and should bump my K24's output up into the 400-whp range, and thanks to the Rotrex's separate oil system and air-to-oil cooler it won't tax the engine's oil system the way a turbo system does.

This makes for a cool running blower and air intake temperatures on par with a normally aspirated engine, but with a big front-mount intercooler and the Rotrex's oil cooler taking up precious front grille space, finding a home for the big air-to-oil cooler the engine needs to keep oil temps within reason was proving very difficult. Every solution we could think of was going to reduce airflow to the radiator, and with an intercooler already restricting airflow to the rad the last thing we wanted to do was stuff a big oil cooler in between the two and hope for the best.

Photo 3/6   |   The finned outer layer and inner core with coolant passages of a Laminova heat exchanger are extruded from a single piece of aluminum for optimum performance and durability.

While doing some research on alternative approaches to oil cooling, I came across a very elegant water-to-oil heat exchanger design by a Swedish company called Laminova. Water-to-oil coolers aren't really all that new a concept, as I'm sure some of you Honda geeks know from the donut-type ones Honda equipped some of their high-output engines with from the factory. If you've ever bought a JDM B18C engine, for example, then you probably noticed the donut-type water-to-oil cooler that's mounted to the block where the oil filter screws on.

The basic theory behind those little Honda donut-type coolers and a Laminova heat exchanger is the same: engine oil and engine coolant flow into the cooler such that heat between these two separate fluid systems is shared and to some extent equalized. For example, since engine coolant (or water) warms up much faster than engine oil, the hotter coolant helps warm the engine oil during start-up, reducing wear from cold start-up on oil temperature/viscosity sensitive components like rings and bearings. And because engine coolant is normally kept at a lower operating temperature than engine oil (especially during hard driving or racing conditions) by virtue of the large air-to-water radiator every road car comes standard with, a heat exchanger also functions as an oil cooler since the engine's coolant is circulated through the exchanger and in the process brings oil temperature down toward the coolant's temperature.

Photo 4/6   |   With oil travelling between the finned outer layer and the core housing with laminar flow quality and coolant passing through the central core, Laminova heat exchangers are at least 20 percent more efficient than a conventional air-to-oil cooler.

Where Laminova heat exchangers differ from regular radiator-style or donut-style coolers is in their core design and the laminar flow of fluids through it. Laminova heat exchangers consist of a tube-shaped housing and a core covered in thousands of 0.2mm thick fins that give it five times greater surface area than a traditional cooler of similar dimensions. The core material is EN-AW 1050A 99.5 percent pure aluminum, the only material capable of providing the thermal conductivity and fin creation properties required when extruding it from a single piece of aluminum (meaning there are no welds or soldering, making the core extremely durable). The gap between the housing and finned core is just 0.3mm, this tight space the oil passes through helping create a laminar flow where the oil travels in parallel layers with no disruption between them. This laminar or non-turbulent flow of oil through the core results in a minimal drop in oil pressure, whereas a traditional air-to-oil radiator-style cooler tends to cause significant pressure drop.

Photo 5/6   |   Laminova heat exchangers are so compact that they can be installed on a wide variety of machines including this turbocharged Hayabusa motorcycle.

Because it doesn't require airflow and features an extremely efficient design (20-40 percent more efficient than a conventional cooler), Laminova heat exchangers are compact and therefore relatively easy to mount within the engine bay such that oil and coolant can be routed through it. It's also a highly customizable design, because you can order cores in various lengths and diameters (up to 332mm long and between 34-63mm in diameter) and can also control the amount of coolant that flows through its central passage by using restrictors or plugs. By controlling coolant flow through the core you can fine-tune the amount of heat being exchanged between coolant and oil and in the process dial in optimum operating temperatures for both fluid systems.

The level of customization possible with a Laminova heat exchanger goes beyond just the coolant flow rate and size of the core. Double and triple core setups are possible, allowing some creative engineering. For example, with a double core heat exchanger one core can be used for cooling engine oil and the other for cooling the transmission or differential fluid. You can also opt for a two-pass cooler, where the oil passes through the core twice before returning to the engine (or transmission or differential), offering higher heat rejection but with an increase in pressure drop.

Photo 6/6   |   The main air inlet on the old EG race car will soon be dominated by a Vibrant Performance front-mount intercooler, and with the brake duct on the passenger side being used for the Rotrex supercharger's oil cooler and the driver-side duct being blocked by intercooler tubing, a Laminova heat exchanger should be a good oil cooling solution that doesn't require any airflow.
View Photo Gallery (6) Photos

In the case of my trusty old EG, the beauty of a Laminova water-to-oil heat exchanger is that I can install it somewhere logical within the engine bay, say underneath the intake manifold where there's easy access to the coolant and oil systems, rather than having to find some nonexistent real estate in the front grille area for a traditional air-to-oil cooler. The big "if" with converting to a Laminova is whether or not the radiator will be overtaxed by adding this heat exchanger into the mix while simultaneously reducing airflow to it because of the front-mount intercooler.

To protect against this scenario, a second SPAL puller fan will be installed so that plenty of CFM can be pulled through the radiator, rather than depending on unimpeded airflow through the front bumper and grille area. I haven't yet installed and tested a Laminova heat exchanger with the Rotrex supercharger setup on my K24 EG, but assuming the twin puller fans can create enough airflow through the radiator, then in theory an appropriately sized Laminova water-to-oil heat exchanger should not only provide plenty of heat rejection for the engine's oil but also reduce engine wear by heating the oil to optimum operating temperature more quickly. This really does look like one of those rare win-win technologies, so if you've got cooling challenges with your own street car or race car project, pay a visit to www.laminova.se and you may just find the perfect solution.

Send your feedback to dpratte@modified.com