Can you apply a universal power loss percentage to all drivetrains?

Updated March 2020 - Drivetrain power loss is a common topic of conversation in the tuner world because any time you strap your car to a chassis dyno, the output being measured is at the wheel, not at the crankshaft or flywheel like the published SAE net horsepower figures used by the auto industry. Strap your 298hp Rev-Up G35 Coupe to the dyno and you may be disappointed to see little more than 220 to 230 horses measured at the rear wheels. Where did that 60-plus horsepower go? It was used up in a variety of ways before it could reach the drive wheels, the primary source being what's broadly described as drivetrain loss.

What's interesting about this example is that when you do the math, you'll see the percent loss is much higher than the 15 percent "rule" you'll find in any number of online threads on the subject. For whatever reason, drivetrain loss seems to be one of the most poorly understood subjects discussed online, so despite my love of the Internet and the limitless pornography it makes available to me, when it comes to a fairly technical subject like this it's hard to find good information.

Years ago, I needed to educate myself on drivetrain losses while heading a rulebook committee for a local racing series that wanted to use dyno tests to measure engine output and then convert the results to net horsepower. After fruitlessly Googling and sifting through endless threads polluted with half-truths and misinformation, I turned to the same source that developed the current manufacturer horsepower standard, SAE International (formerly known as the Society of Automotive Engineers). On its website you can access brief summaries of technical papers published by some of the world's leading automotive engineers. 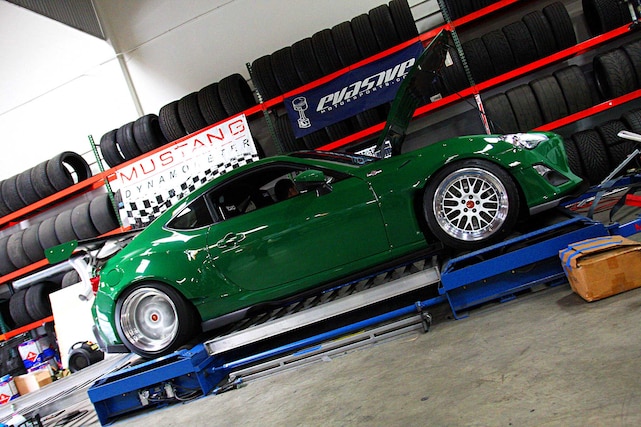 One of the first things I learned from reading these papers was to completely disregard the 15 percent drivetrain loss "rule" (or any other percent value) that so often comes up during online discussions of rated versus net horsepower. The fact of the matter is every vehicle experiences different levels of drivetrain loss as determined by the design of its transmission and driveline components. Simply put, the amount of horsepower lost to the forces of inertia, drag, windage, pumping and friction are different for every engine, transmission and driveline design.

So the total power lost between combustion and forward motion is specific to each vehicle and therefore no single rule, percentage, or fixed number could possibly apply to all vehicles. Even on the most superficial level, this is easy enough to understand because an all-wheel-drive Subaru obviously has a lot more driveline components to spin (front, middle and rear differentials along with front and rear driveshafts and two prop shafts) and a beefier transmission to hold all that turbocharged torque, so it's naturally going to suffer from greater drivetrain losses than a Honda Fit with its much smaller and less robust transmission, smaller and lighter driveshafts (and no prop shaft) and single differential.

Breaking down the different types of losses that occur within a vehicle's drivetrain, steady-state losses occur while the vehicle is cruising at a steady or constant speed, where average angular acceleration is zero because no additional torque is being called upon to accelerate the drivetrain's rotational mass. Within the drivetrain, steady-state power losses occur from the following components: the transmission torque converter (in the case of automatic transmissions), the transmission oil pump, clutch pack drag, one-way clutch drag, seal and bearing drag, gear windage and friction, and final drive losses. 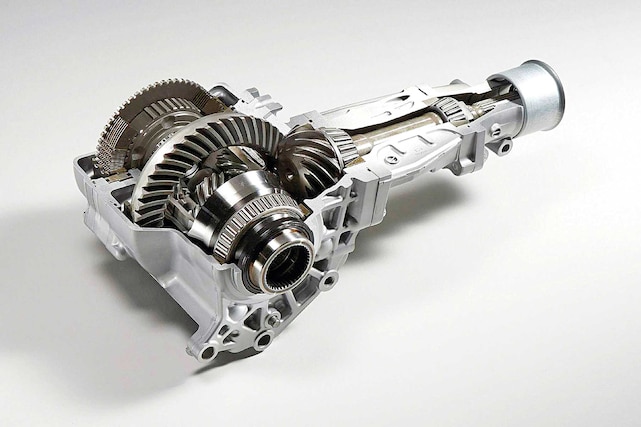 Dynamic drivetrain losses, on the other hand, include the rotational inertial losses from angular acceleration occurring within the drivetrain while accelerating. In fact, during acceleration there are losses from the rotational inertia of spinning transmission and differential internals as well as driveline components like driveshafts and prop shafts, but also from the increased load and friction being generated between the gears within the transmission and differential(s). With increased friction comes increased heat (more on that later)

It's important to understand the difference between steady-state and dynamic losses because SAE net horsepower, as reported by the auto industry, is measured in a steady-state condition. What this means is that the horsepower rating for your vehicle doesn't take into account dynamic losses that occur during acceleration. However, when you strap your car to a chassis dyno to measure its engine's output, the test is conducted at wide-open throttle and power is measured by the speed at which the dyno's rollers are accelerated. This means that drivetrain losses from rotational inertia and increasing friction, drag and windage are at work and will reduce the peak horsepower reading at the wheels.

Within the drivetrain itself, the primary loss sources are the differential and final drive, with further losses stemming from within the transmission, and in the case of AWD vehicles, from the transfer case. Within the transmission, as much as 30 to 40 percent of power loss can be attributed to the pump, with the clutch contributing another 20 to 25 percent. The rest of the loss within the transmission comes from seal drag, gear meshing, bearings, bushings and windage (drag on the gears caused by the gear oil). However, when dyno testing in the direct drive (1:1) gear, power is delivered directly through the main shaft of the transmission, so the only loss sources are windage, friction and drag, resulting in total at-the-wheel losses as low as 1.5 to 2 percent, according to published SAE data. 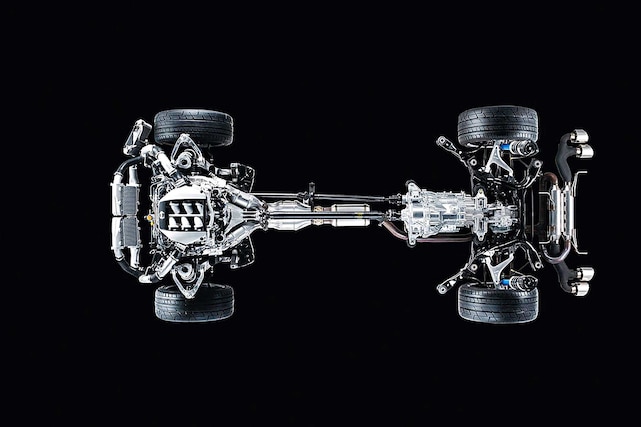 Differential losses tend to be considerably larger, especially in the case of RWD and AWD vehicles where the torque path is turned 90 degrees as it enters the rear diff and exits it toward the rear wheels. In the case of hypoid-type gearsets (where the gear tooth profile is both curved and oblique) that are commonly used in RWD differentials, losses in the 6 to 10 percent range are the norm, while loss from the driveshaft(s) and prop shaft(s) tend to account for about 0.5 to 1 percent of total loss, depending on how well they're balanced and how many the vehicle is equipped with. In the case of FWD vehicles, the torque path is more direct to the front wheels and the use of efficient helical final drive gears means that drivetrain losses can be as much as 50 percent lower than on RWD and AWD vehicles.

In any drivetrain component with meshing gearsets, heat generated by contact friction between the gears is a significant contributor to drivetrain loss. This is true during steady-state driving, but is far more of an issue when the throttle is mashed to the floor and the resulting thrust force and angular acceleration builds up in these drivetrain components. The heat generated by this dynamic friction is absorbed by the transmission and differential fluid as well as radiated to the atmosphere through the transmission and differential housing(s), and in some cases, via a heat exchanger or oil cooler. This absorbed and radiated heat is literally the conversion of engine torque into thermal energy because you can't technically "lose" power but can only convert it into other things (some of our favorites being forward motion and tire smoke). 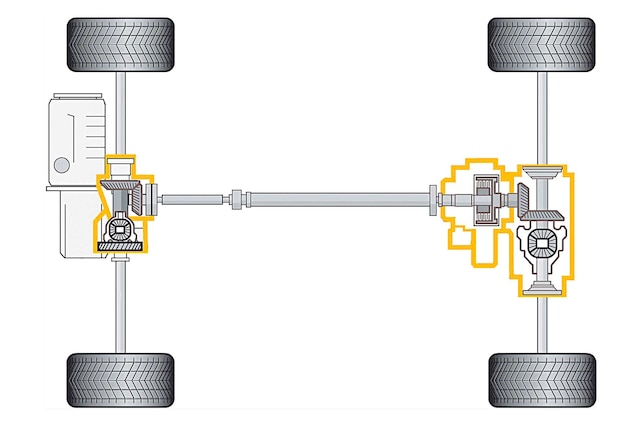 It's also worth noting that the more powerful you make your engine, the greater the thrust force and angular acceleration it's able to exert on the drivetrain, generating even more friction and heat in the process. But because both steady-state and dynamic friction vary depending on engine speed, engine load and the efficiency of the engine and drivetrain's design (how well they limit friction and the associated thermal conversion of torque to heat), there's no way to apply a universal percent loss to it. Nor is it possible to apply a fixed drivetrain loss figure to your car (say 60 whp from my Rev-Up G35 example), because as you modify the engine and increase its output its ability to generate thrust force and angular acceleration also increases (though not in a linear fashion).

No Rule is Universal

In the end, there's no easy way to estimate the drivetrain loss your vehicle experiences on the road or even on the dyno. Coast-down tests are sometimes used on a dyno to attempt to measure frictional losses, but because this test is not dynamic (meaning they're not done while accelerating, but rather while coasting to a stop with the direct drive gear engaged but the clutch depressed so that the engine and transmission aren't linked) it really only captures steady-state drivetrain losses as well as rolling resistance. So rather than attempting to convert your vehicle's dyno-measured wheel horsepower to a SAE net horsepower figure using a percentage or a fixed horsepower value, you're far better off accepting the fact that these two types of horsepower measurements aren't easily correlated and forego any attempt at doing so.

Prepping & Painting Your Car – Tricks of the Trade
SuperStreetOnline how to