With An AMS Intercooler And A Cobb Tuning Turbo-Back Exhaust, The Evo X Is Finally Able To Unleash Its Real Horsepower Potential. 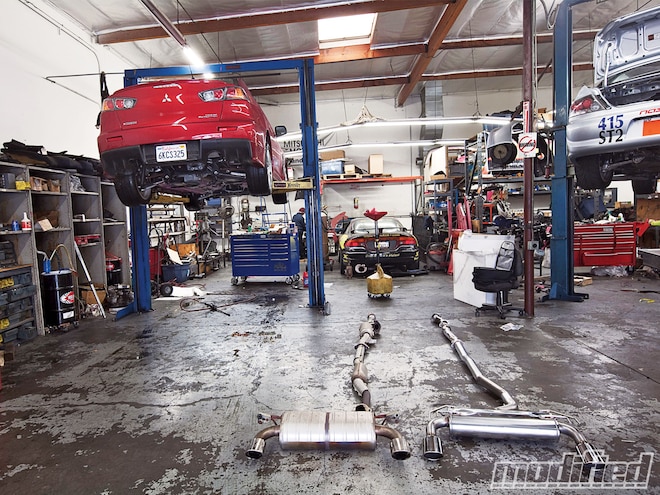 Project Evolution Last month, with just an intake and a Road Race Engineering tune by Mike Welch, the EVO X picked up a solid 51 whp and 35 ft-lbs of torque over stock. The final peak numbers came in at 312 whp and 318 ft-lbs, but Mike said there's more horsepower to be made by freeing up the exhaust flow and providing adequate and consistent cooling with a better front-mount intercooler. I had my homework assignment and got right down to it. 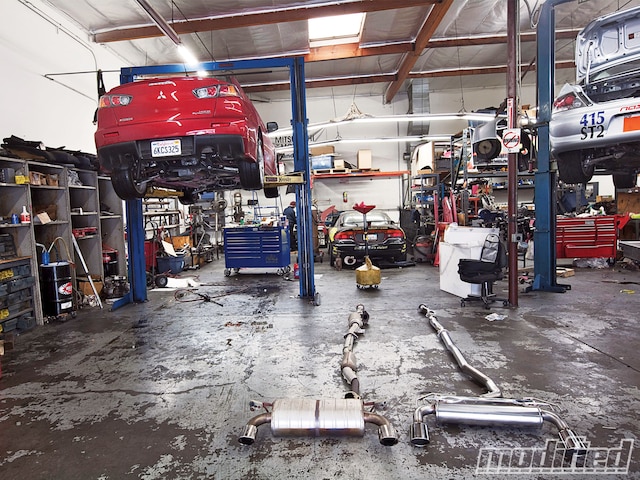 After doing some research and comparing brands, my intercooler of choice was the AMS unit because of its cast end tank design, excellent fitment and 80 percent increase in flow area over the stock intercooler. The bar and plate core measures 12.4x20 inches wide and is 3.5 inches thick while flowing 1,250 cfm. Plus, it's the same intercooler AMS runs on its 750-whp time attack EVO X - meaning you'll never have to upgrade it again.

To go along with the FMIC, I also picked up the AMS upper and lower hard piping kit. The factory piping consists of many rubber pieces that tend to expand under high boost pressures and can become prone to popping off as the rubber deteriorates over time. The AMS four-ply couplers can handle 50+ psi of boost with ease and the lightweight aluminum hard pipes all have bead-rolled ends to ensure they don't blow off under high load. If you've ever had an intercooler pipe pop off during driving, it's not a fun experience (especially when you don't have any tools with you). I went with the AMS wrinkle black powdercoated piping for a stealth look in the engine bay, but if chrome is what you fancy, AMS offers that option as well.

I tackled the installation myself with some simple handtools and no hoist. It took a little over two hours, and because the AMS pieces fit like stock I didn't have to fight to make anything work. The AMS intercooler, despite being much larger and thicker than the stocker, doesn't require trimming or removal of the factory brake ducts located on the main inlet of the front bumper - unlike some of the other intercoolers on the market, which may require modifications to fit.

Upgrading the exhaust was next on the list and it's arguably the single most relevant modification anyone does to their car. While we all want to convince ourselves that it's the performance aspect that's the driving force behind the decision, we all know the look and sound of the system are equally (if not more) important. These days, most aftermarket exhaust systems flow exceptionally well - one 3-inch system isn't going to provide huge horsepower gains over another 3-inch exhaust. So the decision of which system to go with starts coming down to personal preference more than horsepower gains.

That being said, there will always be exhaust systems that fit better than others, so be wary of buying cheap units because they'll give you plenty of headaches down the road. Remember that the EVO X has a large plastic diffuser that almost wraps around the exhaust. If the fitment is off, you can expect some nice burn marks to develop quite quickly. Avoid all that by going with a reputable and trusted brand like I did.

Cobb Tuning's 3-inch SS after-cat exhaust has very few bends in the piping and with a high-flow, straight-through muffler design, it not only meets the strict 95dB sound requirement of most states but it flows well enough to make plenty of power. Furthermore, it tucks up against the chassis for maximum ground clearance, so if you want to go low, this exhaust won't hold you up. My main reason for choosing the Cobb system was its stock-like appearance. You won't know that my exhaust is modified until you get up close to it. The etched tips with the Cobb logo mimic the factory pieces exactly. The tone was also a huge selling point; it's got a nice low rumble to it at cruising and idle. Mash on the throttle and the note picks up considerably, but not to the point of being obnoxious. I can try to describe it all day long, but if you go to youtube.com/modifiedmag you can listen to a sound clip and really understand what I'm talking about. Cobb isn't making many of these systems, either, so you better grab one before they become a heavily sought-after unit.

The factory catalytic converter is a huge bottleneck for performance, and while I would love to run a straight pipe in place of it, police officers won't be too fond of that. Thankfully, Cobb Tuning also makes a 3-inch high-flow replacement that pairs well with its exhaust system and will also fit any other aftermarket unit (or bolt up to the stock one). A high-flow cat is a must if you're looking to make decent power - ditch the stock one as soon as you can.

To finish off the install, a Cobb Tuning 3-inch downpipe was added. It's a small section that goes between the turbo's O2 housing and catalytic converter. With this piece, the exhaust is now a true 3-inch turbo-back system ready to expel as much exhaust gas as the turbo can throw at it.

It was back onto the RRE dyno for the EVO X to see what numbers it was capable of with the new AMS intercooler setup and Cobb Tuning exhaust. Before Mike Welch got down to tuning the car, we decided it would be good to load the stock base map back into the ECU and see what power the car would make with just the parts, no tuning.

[1] As the EVO began to load up the dyno, you could hear it wasn't very happy, belching and missing a bit. The results were a peak 297 whp and 319 ft-lbs of torque. Not a bad improvement over stock, but definitely not good. Considering the car made 259 whp and 277 ft-lbs bone stock, the 41 whp and 42 ft-lbs weren't all that impressive because we made over 50 whp with just the AEM intake and tuning previously. This demonstrates once again how critical tuning your vehicle really is.

With that test out of the way, it was time to see what the complete package could achieve. Mike cracked open his laptop and began tuning. Unlike our previous session with just the AEM intake, where the boost was limited to 22 psi and tapered off to 18 psi at redline, he was now able to raise it up quite a bit to 26 psi tapering to just under 20 psi. The added boost pressure was a welcome addition, but Mike still had a bit of work to do on the fuel and ignition maps. We could tell the new parts were working because the numbers kept creeping up - 320, 330 and finally 340 whp and an equally impressive 348 ft-lbs of torque.

[2] With the exhaust, intercooler and re-tune, we picked up a peak 28 whp and 30 ft-lbs of torque over the previous setup, a very nice gain. You'll also notice that without the tune, adding those parts really didn't do much and the car actually lost peak power.

[3] This chart represents the baseline (stock car) versus tuned with the aforementioned mods. It also shows boost and AFR as an added reference. A total of 82 whp and 72 ft-lbs of torque were picked up over stock, which is wildly impressive for not having to touch the fuel system or turbo. I'm very content with these numbers and can't wait to see how it performs at the track. For now, I think this will be it for engine mods; I've got other areas of the vehicle that need to be addressed before I think about more power.

We should all take one good lesson away from this article: you can install all the fancy parts you want, but without actually supplying the engine with proper fuel and timing (amongst other things) through ECU tuning, you aren't going to make much more power. You might as well be throwing your money away. Tune your car!