The Science Of Cylinder Head Porting. 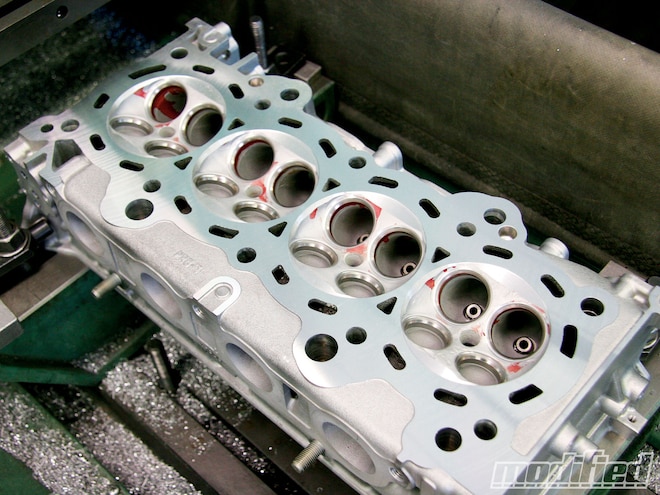 While looking around on modified.com recently, I noticed a post on the site's forum asking what cylinder head porting and polishing is. The person who posted it apologized for asking what he felt was a "newbie" question, but this got me to thinking back to when I first got involved with racing and modifying cars and how I shelled out big bucks to have my Honda B-series cylinder head professionally ported without really even understanding what that meant. I just knew it was supposed to make power, and at the time that's all I really cared about. 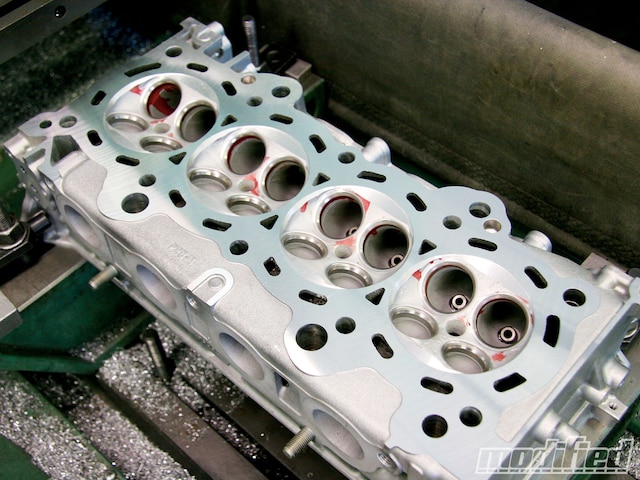 Having watched pro cylinder head specialists at work and having even tried my hand at it (on an inexpensive Honda D-series head), I've subsequently learned that cylinder head porting is far from a basic "newbie" topic. In fact, modern cylinder head porting is a highly sophisticated process that involves the use of airflow benches, CNC mills and computational fluid dynamics along with highly skilled handwork done with die grinders. But before we delve into the science of head porting, let's start by taking a look at the anatomy of a typical overhead valve cylinder head and the areas that are most commonly addressed when attempting to improve its airflow characteristics.

As you can see on the cylinder head cutaway image, the intake and exhaust ports are at their largest and least restrictive out near the openings (where the intake and exhaust manifolds bolt to the head). So although these are the only visible parts of the head's airflow path once it's bolted to the block, in general it's not the most important area to focus on when looking to improve the head's efficiency. Improvements to airflow quality instead tend to come from porting in the bowl area between the valve seat and valve guide (where it's easy to see on the cutaway image as an area of greater restriction), along with the valves and valve seats themselves. But more on that later.

Since every cylinder head is different, learning how to improve their airflow characteristics involves a lot of trial and error, not to mention countless hours on the flow bench and dyno to determine if the port shape changes have actually improved flow and power. However, the importance of trial-and-error R&D is slowly being replaced by more scientific approaches, including the use of CFD software. But the key tool in the head porting specialists arsenal is still the industry standard Superflow SF-600, a relatively simple device that allows the operator to seal and force air through each port to measure their flow rate.

Photo 3/6   |   This cutaway of a cylinder head helps illustrate the fact that the most restrictive areas tend to be around the valves and in the bowl.

The actual act of "porting" or reshaping the ports (and sometimes the roof of the combustion chamber) generally involves a steady hand and a die grinder with various sorts of cutting, grinding and sanding tools attached to it. A skilled cylinder head specialist will focus on shaping the port to get the maximum flow with the minimal amount of enlargement so that maximum intake and exhaust charge velocity is maintained. They will also try to achieve equal flow through each port so that each cylinder gets the same charge of air.

In fact, approximately 50 percent of the gains you're likely to see from head work come from the valve seat area alone. That's why you should make sure your head porting specialist is equipped with a Serdi (or similar) valve guide and valve seat cutter, a specialized piece of equipment that allows for very precise three-angle valve jobs.

The first angle in a high-performance valve job is the throat cut, which is typically around 60 to 70 degrees. This helps ease the air's transition to the seat cut. The second cut is the seat cut, which is generally done at 45 degrees and is the surface that the valve actually seals against. The third and final cut is called the top cut, which is normally in the 20-30 degree range and is made immediately after the seat. This cut helps reduce valve shrouding of the airflow past the valve (or before the valve on the exhaust side) as the valve starts to lift off of the seat.

Photo 5/6   |   With modern tools like CFD software and a Superflow bench, cylinder head porting has become less of a black art and more of a science.

The bowl area and the short turn radius on the port floor are also critical to airflow in most import cylinder heads. In fact, on the Honda D-series, B-series and K-series cylinder heads I've had ported and flow bench tested, as much as 30-40 percent of the improvement to airflow has come from work done in the bowl area alone. This is also the area of the head where a head porting specialist's experience and experimentation comes into play, since changing the radius and overall shapes in the bowl can have a big impact on the angle the airflow enters the combustion chamber at, which can have a big impact on the combustion event itself.

When chasing that last 10-20 percent, factors including the shape, cross section, surface finish and overall volume of the ports come into play. Larger volume ports may seem like a good idea, but more volume can often mean losing torque due to lower air/fuel velocity, especially at lower engine speeds. If taken too far, volume increases can even lead to airflow reversion or backup, where air literally backs out of the combustion chamber toward the intake manifold. Straightening the ports while increasing volume as little as possible is therefore the most common approach in this area. Combine that with a textured surface on the intake side to encourage fuel atomization and boundary layer activation and you should find most of the remaining airflow gains.

There's no question cylinder head porting can be a very effective way to improve volumetric efficiency and overall airflow capabilities of any cylinder head. But when's the right time to spend the $1,000+ it takes to hire a reputable head work specialist? That depends on what you're trying to achieve with your engine build, but in general the time is right when you upgrade to a bigger turbo or higher lift/duration camshafts and the airflow capabilities of your intake and exhaust side bolt-ons exceed that of the head itself. In other words, if your cylinder head starts to become a bottleneck in the system, it's time for some head work.