Testing The Hottest VQ Cams On The Market.

It's been a long time coming for a VQ cam test, and we've put a lot of effort into swapping and properly testing some of the more popular camshafts available for the Nissan VQ35DE engine. The VQ35 is one of my favorite engines of all time, offering great power delivery and output, while being extremely reliable. 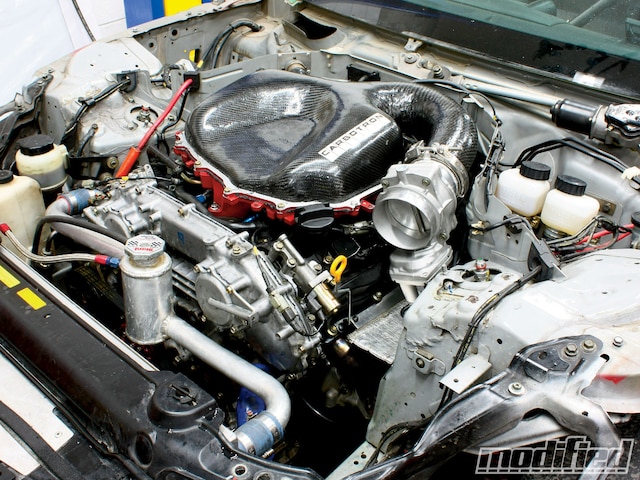 It's a shame then that this fantastic engine produces such mediocre power from the factory, and one of the large contributors to the lack of power are the tiny cams, specifically to the non-revup VQ. However, there's a wide range of cams available for the non-revup engine; in fact, many of them have been available for years. Needless to say, it's about time they actually get tested back to back.

There's a very good reason as to why more VQ camshaft tests haven't been performed on this motor - a typical camshaft swap on a stock 350Z takes upward of eight hours. Be that as it may, we wanted to take the time and do it right. First off, let's talk about the car we're using for this test and how we were able to get the cams swapped, dyno'd and tuned in less than three full days.

By using my personal 350Z race car for the test, we were able to remove almost all of the typical restrictions from the engine to highlight the changes that come about from a camshaft. Specifically, we have SG-Motorsport longtube headers and race exhaust, carbon intake plenum with a stock non-revup manifold and a 90mm throttle body. Because flow into and out of the heads is relatively unrestricted, gains and losses from cam changes can be easily measured. We found a few tricks to speed up the cam-swapping process, and we didn't even have to take the car off the dyno. By the end of the test, we had a process down where we could swap cams quickly, and by purposely leaving a few bolts out (the ones that go through the upper oil pan into the front cover, for example) we were able to shave hours off of the swap time. Not something you'd do for a permanent install, but for the purpose of this test, it's just fine.

The camshafts that we would be testing in this shootout were Jim Wolf Technology S1 cams, Tomei 264 cams and Nismo R-Tune cams. We've compared the advertised numbers in the table below, versus the stock camshafts:

As you can see, the specs are very close between the cams we're testing. They all offer a near perfect idle and low-rpm driveability, while hopefully offering a large boost in performance. This test is designed to show the gains that can be had with a cam streetable enough that Nissan could have installed it from the factory. In a future issue, we'll be doing a high-compression, high-power cam test for those of you who aren't frightened by a lumpy idle and are willing to sacrifice some bottom-end torque in exchange for top-end power.

Testing
The first test we did was to baseline the stock cams. Typically, we would find a stock non-revup 350Z to dyno around 205-210 whp on our Dynapack dyno, so the 272.7 whp my Z put down shows how well the modifications are increasing performance. (Torque was at 257.9 ft-lbs.) With the intake and exhaust not restricting airflow in any manner, it was time to find out how much power a very mild street cam can provide.

The Nismo R-Tune cam, which would be the first one tested, has been around for a very long time. It truly is the benchmark of a streetable cam because Nissan dealerships were selling and installing them, something they wouldn't do if driveability was a concern.

After warming up the engine and breaking in the new cams for around 15 minutes at 2000 rpm, we started to adjust the tune for the increased air intake. Once the air/fuel ratio was at an acceptable level, I went on to play with the intake cam timing to find maximum power. The result was 289.6 whp at 6250 rpm, with the torque increasing to 264.7 ft-lbs at 5200 rpm. And the repetition begins: the radiator must be drained and removed; the crank pulley and all accessories removed from the front of the engine; the upper intake, lower intake and valve covers removed; and the front cover removed. At this point, we can actually begin removing the cams. First the primary chain comes off, followed by the removal of the cam sprockets and secondary chains. You're halfway done here - it's just a matter of swapping cams, checking valve lash and putting it all back together. Leaving the front end off of the car helped accelerate the process, as did the absence of air conditioning.

The next set of cams tested were the Jim Wolf Technology S1 cams. Again, these cams have been around for quite some time and are known as one of the best power-producing cams within the confines of stock valvesprings. Once buttoned up and broken in, the JWT cams made 291.7 whp at 6100 rpm and a bit more torque than the Nismo cams at 270.8 ft-lbs at 5250 rpm.

Finally, we tested the Tomei Procam 264 camshafts. These cams aren't advertised to be used with stock valvesprings, but after speaking with Tomei, they said it would be fine for the test, and we assume that means fine for the general public as well. Because they are relatively low lift and large duration, unless the acceleration rates are very aggressive, we can see how they would work fine with the stock springs. After tuning some fueling and cam phasing to try and optimize the power, the Tomei 264's put down 290.1 whp at 6100 rpm and 266.9 ft-lbs of torque at 4900 rpm.

Conclusion
By the numbers, it's clear that all the cams are effective in producing power, and it's safe to expect a peak gain of about 20 whp and 10 ft-lbs of torque. But what we really need to look at is the area under the curve. That's what you'll feel when you drive the car; always remember that an engine works over a broad rpm band, and a 400whp engine is no good if it can only make that power in the last 100 rpm. Looking at the dyno plots, we can see the JWT S1 has the flattest torque curve, with the most down low grunt and falling off less than the Nismo up top. The Tomei cam seems to be catching and almost passing the JWT cam by the time it gets to 6800 rpm, however, it comes at the loss of some bottom-end power at the start of the run. If you're revving the VQ past 6800 rpm, we'd expect the Tomei cams to pick up slightly more power, making it more suitable for a high-rpm powerband. The Nismo cam seems to be the most modest of the bunch, which isn't a bad thing if you want a cam that's essentially a factory-offered option.

At the end of the day, a lot of hard work and plenty of wrenching went into completing this test, but we hope the data and value it brings to the VQ community was well worth it. There is no clear winner - all the cams performed remarkably well. It's interesting to note that we've seen even larger cams net another 20 or more horsepower over our results here, so we're eager to put some race cams to the test, at which point it'll also be necessary to discuss the driveability and idle quality factors of such cams since things start to get ugly real fast once durations approach the 300-degree mark. We're currently still trying to get the most popular camshafts together, but once they're at the shop, it won't take us long to test them since we've already got the procedure down pat.