Donated Motor In Under An Hour 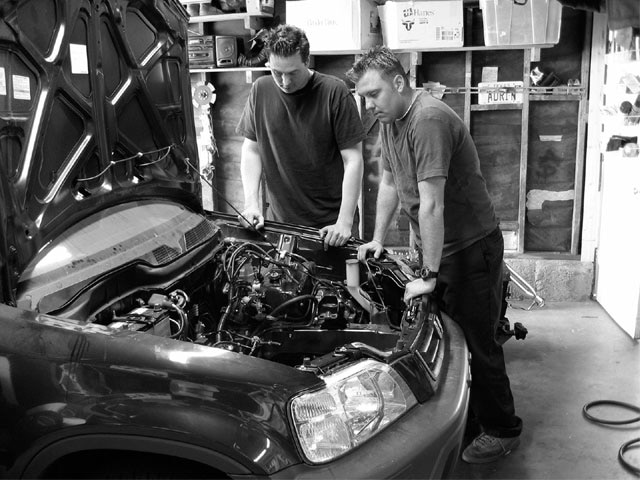 There are days when you feel productive, others when you don't even want to get out of bed, and some when you're so busy serving the Man that you can't even do your own thing. As you might have guessed, the majority of us on staff would like nothing better than to sit home, eat old pizza, and watch scrambled movies on the adult entertainment channel. And after seeing Jason Dienhart's bird crap-plastered CRX in last month's issue, you probably think that he's just as lazy as the rest of us slackers. He claims that he's "too busy" planning special events or some lame excuse like that.

Finding a motor for the CRX was easy since we could gank the B20B Frankenstein out of our stillborn Project CRV. (For more info on this motor, refer to "B20 to the Max," Dec. '01.) The most difficult parts were finding somewhere to do it and trying to get JD off the phone. After weeks of waiting, our deadline to get this donor motor started closing in. We knew that it was time to bust out the big guns so we sent Roel in to challenge JD to a slam-dunk contest. If Ro lost, he'd have to cut down from eating four lunches a day to only being able to have one like everyone else. But if JD lost, he'd have to come to the office on Saturday morning, tow the CRX home, and pull the motor in less than an hour in his garage.

We're not supposed to tell you who won, but we are going to say that the CRV is as light as ever and there's a big puddle of coolant in Jason's garage. Even though Jason was confident that he could have the motor out in an hour, he managed to drum up a sidekick by the name of Bryan "Hot Pants" Bridges. Just under the 60-minute mark,Jason and Hot Pants had the motor on the ground and the CRV back on the trailer. It probably could have gone much faster but we spent a lot of time sitting around planning on what torture to put Otis through at the Spring Break Tuner Bash and Super Street Tour 2003. But remember, you didn't hear any of this from us.

Afterward we all celebrated by watching the latest episode of Super 2NR TV, featuring late-night Japanese drift coverage with Nads and Jonny behind the camera. Next month we should be starting to take the CRX apart, but that really depends on JD's schedule. From what Nads says, Jason only has two events to do all year so he should have plenty of time to comply with our demands. If not, we'll just send Ro in to school him again.